Akram Zaatari: This Day at Ten

The first solo exhibition of the Lebanese artist in Switzerland, 20 May - 31 July 2016, Kunsthaus Zürich. Works created between 2003 and 2013. Curator: Mirjam Varadinis. 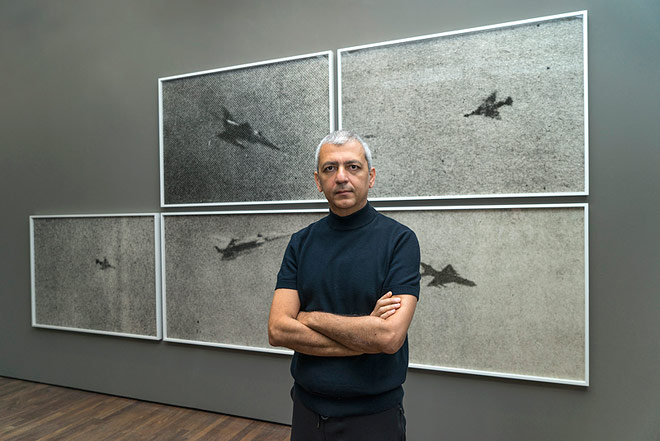 In his first solo exhibition in Switzerland, Akram Zaatari invites audiences to reflect on the notions of history, war and resistance. From 20 May to 31 July 2016, the Kunsthaus presents This Day at Ten, an exhibition that offers an insight into 10 years of Akram Zaatari's artistic practice.

Akram Zaatari's artistic method can be compared to that of an archaeologist: he is interested in excavating objects, and recovering narratives white reconstructing them into new bodies of work that reflect on his times and engage in a subjective writing of histories. Memory and the archive are essential players in Zaatari's universe as are various characters he works with, and documents his work recovers, such as letters, photographs, diaries and other objects.

History - With a Small and a Capital 'H'

Born in Saida in southern Lebanon in 1966, Akram Zaatari has degrees in architecture from Beirut and media studies from New York. In his works personal accounts meet with important historicat events, as is exemplified in the films This Day (2003) and Letter to a Refusing Pilot (2013) - the two works that chronologically mark the starting and end points of the exhibition. This Day is at once an extroverted geographical trip to Lebanon, Syria and Jordan, and a journey in time exploring how and when people decide to document what they go through, in photographs, notes and other recordings. This Day observes the recording of the daily as a subjective writing of history. It is the film where Zaatari decided to took at his personal recordings while living through the Israeli invasion of Lebanon in 1982. This event marked Zaatari's childhood - he was 16 at the time - and also provided the context for the other video in the exhibition: Letter to a Refusing Pilot (2013). The time span between the two films is exactly 10 years, hence the title of the show.

Letter to a Refusing Pilot was produced for the Lebanese pavilion at the Venice Biennale 2013 and has been on long-term loan to the Kunsthaus Zürich from the Walter A. Bechtler Foundation since 2015. The film is based on a story that Akram Zaatari heard in his youth about a pilot in the Israeli Air Force who, a week after Israel invaded Lebanon in 1982, refused an order to bomb Saida's public school. Instead, he dropped his bombs in the sea.

Letter to a Refusing Pilot combines personal and archival documents as it seeks to recuperate historical truth from the annals of personal reminiscence and humanizes a personal gesture in the face of a greater conflict.

Zaatari's concern with history and memory started with the setting up of the Arab Image Foundation in 1997. This non-profit organization was established in Beirut to collect, preserve and study photographs and the practices that generate and disseminate them. The AIF's collection numbers, to date, more than 600,000 photographs. Through this platform Zaatari has produced numerous projects exploring the nature of photographic record and its ties to the social living fabric.

Zaatari is one of the leading figures of a generation of artists from post-civil war Lebanon with similar interests in history and the archive. They have studied war through their work and share an anxiety about the future of the region. Their experiences remain rarely exhibited in Switzerland. In the current political climate, Kunsthaus curator Mirjam Varadinis believes in the importance of giving those concerns greater visibility.

Zaatari's works are represented in prestigious collections, including those of the Tate in London and the Centre Georges Pompidou. The Kunsthaus Zürich acquired the multi-part photo series Another Resolution (1998-2007) in 2008. This inaugural solo exhibition - presenting 26 works, including four videos as well as photographs and drawings - is the first opportunity for a Swiss audience to engage with the Lebanese artist's work and offers an insight into the multi-faceted artistic practice of Akram Zaatari.

Supported by the Dr. Georg and Josi Guggenheim Foundation.

The first solo exhibition of the
Lebanese artist in Switzerland

The Foundation as a research and discussion platform about photography, the archiving of history, and the role of the artist, looking at the work of Akram Zaatari, Lara Baladi and Vartan Avakian.
Nafas