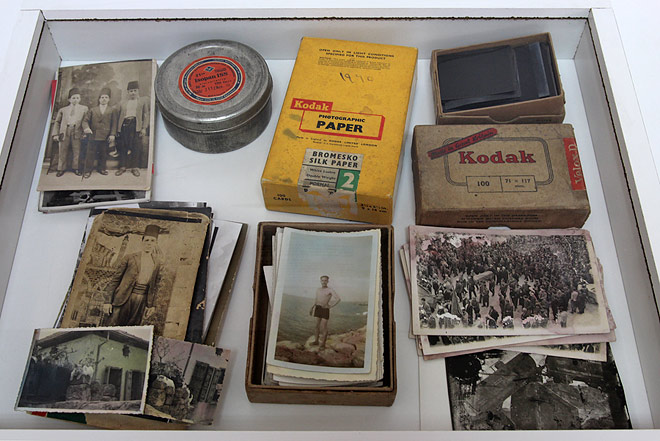 On the busiest street of Gemmayzeh, in the heart of Beirut, stands a thick dark green door. There is a Hermes shop on the right, another one across the street – these are not venture shops of the luxury brand but those of a family engine company that echo the rhythm of the Arab Image Foundation (AIF). Here, on the second floor of 337, Gouraud Street, the institution develops at a rumbling speed what is the most significant visual archive of the Arab World.

Created in 1997 as an artist initiative under the impulsion of Akram Zaatari, Fouad Elkoury and Samer Mohdad, soon joined by Walid Raad, the Foundation was thought as a way to preserve the photographic material dispersed in the region, when it was at the edge of disappearing because of the political context and the lack of an appropriate structure. AIF has since lost and gained several brilliant minds, adding to the board of members artists from a younger generation as well as historians, among whom Vartan Avakian, Hrair Sarkissian, Lara Baladi, Yasmine Eid-Sabbagh, Zeina Arida and Issam Nassar. Confronting and combining their approaches to understanding the collection, they established the Foundation as a research hub and as a platform for discussion about the archiving of history, and the role of the artist in this decisive discourse.

To start with striking numbers before getting to the various equations, the collection brings together 600 000 images from a dozen countries, including those geographically remote from the Arab borders such as Argentina, Mexico and Senegal. The photographs span over a century and a half, with a peak around the mid-20th century, and covers the scope of photography - from studio shots to family pictures. The Foundation shortly became a reference, and individuals reached out to them to offer their fund of images. The question then arose: "What to collect, and what to do with the collection?"

To this critical question was offered an array of responses covering the fields of exploration of the members, and AIF soon defined itself as an archive of research and collecting practices more than an archive of photographic practices, as co-founder Akram Zaatari formulates it. Zaatari notably conceived a series of publications and exhibitions that, beyond their historical and cultural values, propose a study of photography as a societal component. The culmination of his engagement was his appropriation of Hashem El Madani’s photographs. Excluding the usual treatment of vernacular photography – an inventory of the work of a studio photographer who in that case was not even as good technically as his peers -, Zaatari focused on the photographer’s singularity to capture his clients in various public places of Saida, in the South of Lebanon. After identifying the different locations, Zaatari printed the old photographs, displayed them on the walls that served as backgrounds for the portraits several decades ago and mapped the 33 locations on a route that visitors were invited to follow. An act of preservation in its most experimental form, the project was complemented with a book and a video that all together helped to address the changes of the city, and how photography has mixed with society throughout modern times.

If Zaatari mainly approaches the collection as an archeologist, Lara Baladi brings in a totally different problematic. A photographer based in Cairo, Egypt, she has witnessed how art became a determinant force during the recent events, and the complicated role it continues to play in the region today. "Here and in the whole region during the Arab uprisings, the act of photographing became not only an act of seeing and recording; it was also fully participatory. At the core of the Egyptian uprising, photographing was a political act, equal in importance to demonstrating. It constituted civil disobedience and defiance of the regime", she wrote for Creative Time Reports. Approaching contemporary material as a way to analyze political constructs and to draw out narratives inherent to popular media, she is currently working on a trans-media project based on YouTube content and titled Archiving a Revolution in the Digital Age.

Her interest for popular culture joins that of Vartan Avakian, who worked on a project called The Revenge of Geography: Heroes, Beauty Queens and Lebanese Action Cinema 1979-1989, A Topographic Survey of Beirut. The radical piece explores the way cinema – and in this precise work, action movies – and other imaging practices captured the expression of power and other consequential issues such as the urban and social structure during the civil war era. On the other side of the archiving practice, Yasmine Eid-Sabbagh defines existing material as intimacy and as an inspiration for fictional poetry. Rewarded at the festival of Vevey, in Switzerland, and of Arles, in France, her project Possible and Imaginary Lives, created together with Rozenn Quéré, was a disruptive interpretation of a family photo archive.

The goal of AIF is certainly not to make the collection any bigger by all mean, but rather to question and support the act of preservation in its most engaged forms. Not only does the institution encourage its members and researchers to explore the collection; they also established themselves as a pioneer and an adviser in the region in the field of archiving. They notably initiated, together with international organizations such as the Getty Conservation Institute and The Metropolitan Museum of Art, a project called MEPPI aiming to preserve the photographic heritage of the Middle East. For the past three years, under the lead of current AIF’s director Rima Mokaiesh, they have identified 300 collections in the region and trained 60 of them, with whom they share transversal challenges if not the same material. Locally and internationally, the Foundation also organizes a number of symposiums - such as the high-end conference presented in 2012 in Ashkal Alwan, in Beirut, by Akram Zaatari and Clément Chéroux around the theme History of the last thing before the last: art as writing history -, as well as workshops and pedagogic programs that all together stand as a strong statement about collecting, preserving and distributing archival material. 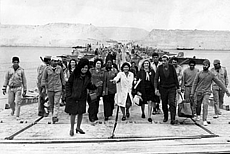 The foundation in Beirut and its extensive photographic archive, principally from the Near East and North Africa.