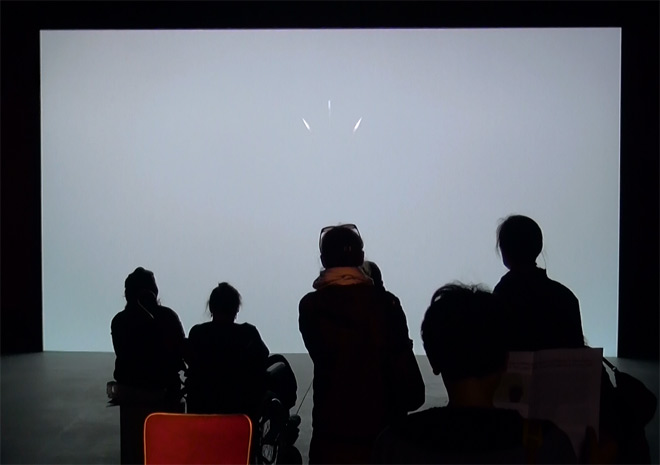 In the summer of 1982, a rumor made the rounds of a small city in South Lebanon, which was under Israeli occupation at the time. It was said that a fighter pilot in the Israeli air force had been ordered to bomb a target on the outskirts of Saida, but knowing the building was a school, he refused to destroy it. Instead of carrying out his commanders’ instructions, the pilot veered off course and dropped his bombs into the sea. It was said that he knew the school because he had been a student there, because his family had lived in the city for generations, because he had been born into Saida’s Jewish community before it disappeared.

As a boy, Akram Zaatari grew up hearing ever more elaborate versions of this story, for his father had been the director of that school for 30 years. An uncle even told him that people had met the pilot in question, saying he had returned to Lebanon on his own, passed by the school, and asked to see the damage that had been done to his alma mater.

In many ways, the Israeli invasion of Lebanon had been the backdrop to Zaatari’s education as an artist, as he began documenting the world around him by recording the sounds of fighter jets and photographing explosions on the hills above Saida. He also kept a diary of the violence defining his days, with his entries rounded out by stories, reports of school closures, and lists of films that had captured his imagination. Decades later, during a public conversation in a Paris suburb with the Israeli filmmaker Avi Mograbi, Zaatari retold the pilot’s story in his own words, turning it into a fable and perhaps a truthful fiction. After the transcript of the talk was published in a small orange book, he discovered it wasn’t a rumor. The pilot was real.

Born and raised on a kibbutz, Hagai Tamir had never set foot in South Lebanon, but like Zaatari he had studied architecture, and he knew a schoolhouse (or a hospital) when he saw one. His refusal to bomb the building remained a secret, known only among small circles, for 20 years, until the day came when Tamir found it necessary to speak. That was 10 years ago in Israel, in the context of renewed debate over the killing of innocent civilians during Israeli military campaigns (or more specifically, in the aftermath of a targeted assassination of a Hamas member in Gaza City, which killed 15 people and injured 100 when an F-16 dropped a one-ton bomb on a densely residential neighborhood). Now, across a border still defined by a state of war, Zaatari has picked up the other side of what is still deemed by law to be an impossible correspondence.

Pulling together all of the different strands of Zaatari’s practice for the first time in a single work, Letter to a Refusing Pilot (2013) is a film and video installation that reflects on the complexities, ambiguities, and consequences of refusal as a decisive and generative act. The installation weaves new footage into five decades of archival imagery and, at the same time, unravels the inherited histories of heroism, nationalism, and integrity that have entangled the Arab-Israeli conflict for generations. Taking as its title a nod to Albert Camus’s four-part epistolary essay "Letters to a German Friend," the work not only extends Zaatari’s interest in excavated narratives and the circulation of images in times of war; it also raises crucial questions about national representation and perpetual crisis by reviving Camus’s plea: "I should like to be able to love my country and still love justice.”

Letter to a Refusing Pilot is a three-part installation that proposes a dialogue between a 30-minute video and 16mm film on a continuous loop, and does so in a space set up like a stage awaiting an actor or a cinema anticipating a spectator. The video, also titled Letter to a Refusing Pilot, begins with a sound and a blur, which fitfully sharpens on the tiles of a rooftop terrace. Then the camera pulls back and lurches up to reveal an aerial view of the colorful, ceramic-paneled façade of a famous modernist building in the seaside neighborhood of Raouche. The opening sequence was shot on a standard HD camera mounted on a tiny remote control drone. As such, it introduces the first of the film’s many doubles: a fascination with flying twinned with a fear of how the technologies of flight are and could be used (whether for surveillance or war).

From there, the video moves purposefully through family photographs, Antoine de Saint-Exupery’s Le Petit Prince, snatches of dialogue from Egyptian cinema, Françoise Hardy’s laconic French pop, obsolete reel-to-reel players, aerial photographs of a site in South Lebanon, Israeli television news footage of the invasion, and a striking series of nearly choreographic shots, showing a group of teenage boys who are meticulously, repeatedly folding paper planes and snapping them with their wrists to fly them from the balconies of their vernacular buildings over the skies above Saida. The city appears nearly rural in the old photographs of the famed studio photographer Hashem El Madani, destroyed in the images Zaatari made as an adolescent, and completely tangled in concrete, power lines, plants, and strung laundry in the footage shot earlier this year. The video follows the life of a school, whose students are predictably rowdy and whose groundskeepers still tend to the campus with great care. Zaatari’s work also invests considerable (if enigmatic) meaning in fullcircle views of a sculpture by Alfred Basbous, which once stood in the school’s garden (it was later moved to an inside corridor). The piece, made by one of the three brothers who formed a rare artistic dynasty in Lebanon, is a highly fragmented and distorted representation of two figures, which appear to be falling and propping each other up, embracing and fighting at once. (…)

Facing Letter to a Refusing Pilot is a new version of Zaatari’s Saida June 6, 1982, which otherwise exists as both a composite image and a video. It is presented here as the latter transferred onto 16mm film. Saida June 6,1982 combines photographs of multiple bombing campaigns into a single image of nearly simultaneous explosions on the hills above the town where Zaatari was born, like years of war compressed into a single day. Letter to a Refusing Pilot revisits those same hills, now crowded with buildings. In between the film and the video is a single chair, reminiscent of cinema-style seating, which is effectively reserved for the pilot. It faces the explosions over Saida rather than the story that Tamir’s refusal inspired. Within minutes of reporting a fictitious malfunction, one of the pilot’s colleagues picked up and carried out his orders. The school was bombed anyway. Tamir’s refusal was in that sense futile. And yet it raised a number of difficult questions that continue to reverberate today, questions about power, justice, nationalism, belonging, boycott, rebellion, and the promise of a resistance movement that could be more productive than corrupted.

Film and video installation
featured at:

Commissioner: Association for the Promotion and Exhibition of the Arts in Lebanon (APEAL) 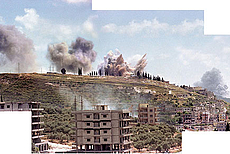 The Documentary Turn. Zaatari's multi-strand approach that defines his practice as ‘field work’.