Before, from 16 May until 24 August 2014, the Musée d'Art Moderne de la Ville de Paris presented the show at ARC, the museum's research and exhibition area. Bringing together over 200 works by twenty artists from the years 1960-1970 and representatives of the new generation, the exhibition focuses on painting, photography and cinema, as well as key aspects of Iran's modern visual culture: posters and documentary material ranging from the Shiraz-Persepolis Festival of the Arts to the revolutionary period and the Iran-Iraq war. 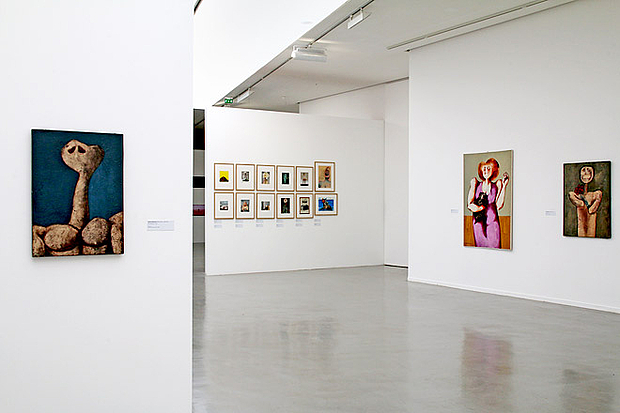 >> Nafas photo tour
Tour through the exhibition in Paris,
including explanations about the chapters and art works

Introductory text at the exhibition:

The history of modernism in the visual arts in Iran during the latter half of the 20th century is increasingly being questioned. With this in mind, the exhibition Unedited History is an attempt to recreate the broad 'sequences' of the social and political context out of which visual culture in Iran has grown since 1960. To that end, we need to approach the subject without reference to investment or the effects of fashion, both of which are part of 'contemporary Iranian art' and can lead artists, institutions and the art market to invent and exploit their own exoticism.

The title Unedited History is a reference to film editing - the 'rushes' stage, when the film has been shot but the footage has not yet been edited and, by implication, has never been seen by the public at large. The cinema metaphor raises questions about the way the history of contemporary Iran is recorded through the structuring elements of visual culture. The latter invites study of the transversal dynamics between the plastic arts, graphic art, cinema, and the performing arts, as well as cartoons, agit-prop demonstrations and religious activities.

The exhibition does not seek to cover all the expressions of modernism. The aim is more a matter of highlighting the strong connections that exist between visual culture and the various legacies that visual culture has generated or renewed, and to do this through corpora that are both coherent and heterogeneous. Each of the artists in their own particular way formulates a reaction to the historical moment to which they belong. These are artists, filmmakers and cultural producers who are attentive to the history of images and to documentary traditions but who are also subject to the power relationships and ideological conflicts of contemporary Iran.

Although Unedited History is part of an international research movement concerning modernism in Iran it is also an attempt to deconstruct a too rigid view of the situation - a preconceived idea, for example, that the 1979 Revolution might have brought the thrust of modernism to an irrevocable halt. The exhibition concentrates as much on what was a break as on what continued - occasionally more discreetly - across the succeeding periods, with the same figures dominating the scene. If only to get a glimpse of the arcane labyrinths of a society where the individual was often sacrificed for the sake of the community, it is necessary to look not just at the history but also the geography of events.

The function of photography, film and documentary work is to structure local understanding of modernism in Iran and they give us conflicting interpretations of the images - particularly since the 1960s. These corpora, which are often incomplete or difficult to gain access to, are brought together in this exhibition in sets of categories. Photo or film archives, and also cartoons, posters and reviews, are a means of recording social and political history.

Archaeology of the Final Decade presents:
Festival of Arts Shiraz-Persepolis, and Kaveh Golestan - Shahr-e No.

Publication:
Published by Paris Musées, Unedited History, Iran 1960-2014 oscillates between past and present, combining details of the works with critical essays and historical documentary material and bringing a fresh perspective to local-global interaction in the Iranian art context. Among the authors: Vali Mahlouji, Bavand Behpour, Hamed Yousefi, Anoush Ganjipour, Catherine David and Morad Montazami. There will also be a selection of texts going in greater detail into the issues raised by the exhibition. Price: 39.90 €

(From press information and a text at the exhibition)