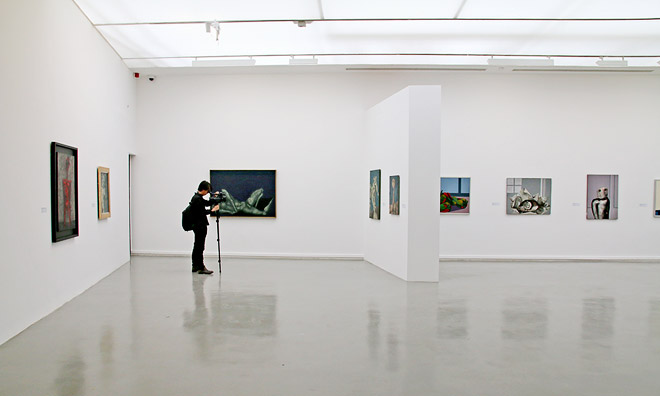 Culture and the arts were becoming increasingly important to national prestige in Iran. There was a remarkable upsurge in the visual and performing arts and also in publishing. In addition to discussions about identity or local awareness of 'non-Western' art, there were moves to completely redefine modernism - through biennials and other structures, supported by the Shah and particularly by the Empress, but also through complex choices of form and technique and symbolism on the part of the artists, who would combine traditional themes with new ones, history with myth, metaphysics with politics. The dividing lines between the different levels of society became increasingly marked and gradually shattered the cultural shop window of the country, giving place to protest movements against the regime.

Bahman Mohassess (1931-2010), a key figure, was probably the first Iranian artist to escape the dilemma about identity that most of his fellow artists were experiencing. He studied sculpture in Italy and developed a dialogue in his works between classical mythology and the crisis of the post-war individual. His language then veered towards caricature and the grotesque. He destroyed the majority of his works on his last visit to Iran, before retiring to Rome for the rest of his life.

While many of his contemporaries wavered between abstract and figurative, Behdjat Sadr (1924-2009) steered towards a non-geometrical kind of abstract painting blending calligraphy and a scientific obsession with movement. Like Bahman Mohasses, his work was typical of the cosmopolitanism of the 1960s and 70s but at the same time questioned the Eurocentric concept of modernism.

Ardeshir Mohassess (1938-2008), who is an essential figure in the history of the graphic arts, is represented by an 'ideal' library. This consists of artist's books and a variety of publications which trace his career as a cartoonist and commentator in the international press (Iran, the United States, and France). His very strong influence on contemporary Iranian artists is a result of the widespread presence of his printed works.

Graphic artist Morteza Momayez (1935-2005) is represented by a juvenile work from the early sixties: his covers for the international literary review Ketâb-e Hafteh (Book of the Week), which introduced Iranians to the writings of authors such as André Gide, Leo Tolstoy, and Rabindranath Tagore, translated mainly by the poet Ahmad Shamlou, the review's editor.

The Archives de la décennie finale (Archives of the last Decade), brings together two corpora of unpublished documentary work which explore the beginnings of the cultural and political upheaval of the end of the 70s: the archives of the Shiraz-Persépolis Festival of Art (1967-1977) and Kaveh Golestan's (1950-2003) photographs of Shahr-e No (1973-1975) the red-light district of Tehran.