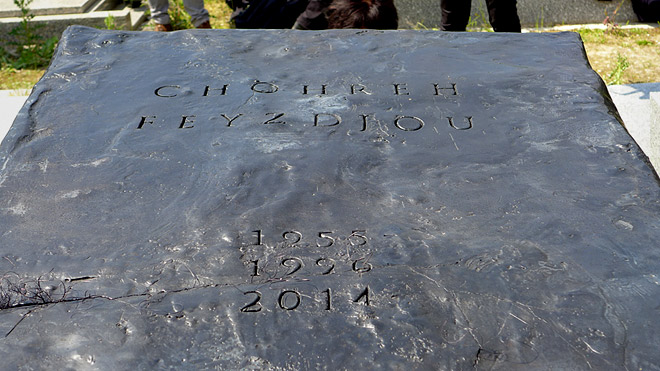 Barbad Golshiri, in a tribute to the artist Chohreh Feyzdjou, has constructed a tomb in the form of a sarcophagus placed over the unadorned site of her grave in the Cemetery of Pantin.

A prologue is always anachronistic as it is written after one’s tome is done. Thus a prologue is always an epilogue. The sepulture of Chohreh Feyzdjou is also belated. She died in 1996 and it is only on 16 May 2014 that we mark her sepulture. Furthermore, a sarcophagus literally means "flesh-eating" for the limestone the Greek made their sarcophagi with could decompose the corpse in a matter of weeks. So today the belated sarcophagus bears no corpse, save for what remained of Chohreh’s last work Zijsporen Gynaika 96 [1] . Her untimely death did not let her inaugurate this work. What remains of the posthumous work thus resides in her tombstone. Yet the sarcophagus is not of stone but wax, walnuts stain and soot, and thus, unlike almost all grave markers is ephemeral. Grave markers are like the Vanitas that merely depict death and symbolise perishability of our lives but their own body shall not perish or even alter. The sarcophagi too had to remain intact, but for the reasons that ephemerality was crucial to Chohreh Feyzdjou’s life and work (we should not neglect the fact that her most productive years were indeed her last years) and that the need to pass through matter was essential to her corpus of work, and that the corporeal aspect of art was not secondary to her art, and she eliminated traces of liveliness, and that in her work the process of death was the very process of metamorphosis, the grave marker is made to be a lingering alterable ephemeral one. That is to say, Concession Éphémère, is altering, becoming, lessening and dying down, yet gradually.

1. This I owe to Michel Dewilde, who had kept what remained of Chohreh’s last work and handed them to me to use them in her sarcophagus.