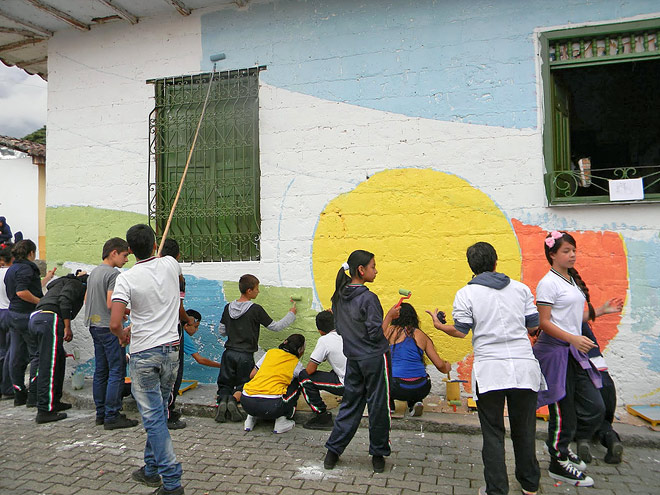 The exhibition Contraexpediciones. Más allá de los mapas [Counterexpeditions. Beyond the Maps], shown at the Museum of Antioquia, Medellin, from April through June 2014, was nurtured by a series of experiences and working residencies, in which the invited artists and collectives, together with members of the local communities, examined the region’s characteristics and issues.

The residencies took place in the municipalities of Apartadó, Bello, Belmira, Caucasia, Puerto Berrío, Santa Fe de Antioquia, San Vicente, Yolombó, the Rio Claro Reserve, and the cities Ciudad Bolívar and Medellin, both in the river and downtown areas. Furthermore, other museum-related activities which aim to gather knowledge about a specific area through collection and documentation were also included, such as the El Peñol Historical Museum and the La Salle Natural Science Museum, of the Metropolitan Institute of Technology of Medellin.

Artists / Collectives and their projects

Beehive Design Collective
Residence in San Bernardo de los Farrallones
Record of murals on site
The Beehive Design Collective, created fourteen years ago, is composed by people from all over the Americas who make collaborative work with communities throughout the continent in order to identify a variety of concerns derived from issues such as free trade agreements, mining, big building projects or corporate globalization. These investigations translate into graphic campaigns, that is, drawings using animals as metaphors which are put into painstakingly detailed murals that can take years to be completed. The exhibition showcases previous graphic campaigns, such as Plan Colombia (2002) and Mesoamérica Resiste (2013). Also, the residence work done by members of the collective made in the municipality of San Bernardo de los Farallones -- in which they did murals with the community, mainly students, in order to reflect upon the natural wealth and the rejection of gold mining in their territory -- is shown through photographs.

Patricia Lara
Residence in Santa Fe de Antioquia
Alerta Roja
Installation and document on video
As a result of the social impact and concerns that excessive gold mining is creating in the municipality of Santa Fe de Antioquia, Patricia Lara invited people from different disciplines of knowledge with whom she organized a series of workshops and exercises that allowed them to know their historic memory and to get close to several areas of Santa Fe. Together, they compiled knowledge that was put by all the participants on a series of artistic objects: floating houses full of maps and drawings. Some of these floating houses were taken to the museum, the others stayed with the community so as to give continuity to the project.

Mauricio Carmona
Residence in Magdalena Medio
Efecto Kuleshov
Video installation
Much of the Colombian territory possesses a geographic, social and cultural diversity that is often marked by a history of violence and death, as it is the case with the region of Magdalena Medio. After centuries of exploitation, these territories have a seemingly inexhaustible wealth which, paradoxically, is not reflected in the areas and towns of origin. Carmona gives a look of the structures and infrastructures of vast oil lands, constructed from the journey itself through their waterways, their railways and their roads making up a discontinuous landscape where the impossible is attempted: to speak of the experience of the journey by recording images that remind you that the stability of the known world has been abandoned.

Julián García
Residence in Yolombó
Hogares Eco Sostenibles
Installation with posters, spoons and seeds.
Julián García made contact with several environmentalist groups in the municipality of Yolombó. From that interaction, he proposed a series of murals in one of the main roads which were done by children with whom he also visited a representative peasant market garden, which generated a debate about food autonomy.

María Antonia Pérez & Ana Lucia Cárdenas
Residence in Bajo Cauca
Rastrojo
Installation, drawing, earth and photographs.
The collective enquired into two different views of the concept of landscape: the Western view, which is grid-like, putting things into frames and isolating them; and that from the ancient peoples like the Emberá-Sinú, and other indigenous communities of the Bajo Cauca region, who do not see the horizon as landscape but as stover, looking under the earth that nourishes them, where their ancestors are. To de Senús, it is very difficult to conceive the landscape as something purely esthetic; their notions of beauty cannot be separated from their notions of usefulness.

Santiago Vélez
Residence in Belmira
Agua Oro
Installation
Santiago Vélez visited one of the regions of Antioquia that provides the city of Medellin with most of the water they consume. There, he enquired into the uses, misuses and contamination of the water due to the practice of artisanal mining.

Paola Rincón
Residence in the Emberá and Senú Indian Reservation in Las Palmas de Apartadó.
Las lágrimas de un pueblo
Installation
When she arrived to the Las Palmas reservation of the Emberá-Senú, Paola Rincón was greeted with caution and only encountered “the tears of a people”,
Lágrimas de un pueblo, as she called her work. The land of these communities is surrounded by monoculture plantations of banana and their habitat is gripped by a terrible drought. All around them, you can only hear the noise of the fumigation planes, and among their moans you can hear the increase in suicide rate of a people faced with the destruction of their culture.
Julián Urrego
El Peñol Historical Museum
Hacerlo Posible/Hacerlo Visible
Photographs and objects of the El Peñol Museum collection
Julián Urrego recovers the memory of a town that disappeared 36 years ago, flooded to create the dam for the hydroelectric power station Peñol-Gutapé. The memory of their community, relocated a few kilometers away from their old lands, is still alive on the walls of the El Peñol Historical Museum, which was invited to Contraexpediciones to exhibit works showing the history, destruction and loss of their land, as well as the activities of its current inhabitants.

Eulalia de Valdenebro
Residence in the Río Claro Reserve
Mapping with cloth, water and sun, 1:1 scale
Decades ago, the strategy implemented to preserve Rio Claro as a natural reserve was a counter-colonization. According to the land laws of the time, people could claim a tract of land as their own if they demonstrated that they were using it in a productive way, which included practices -- such as stock-breeding and mining -- that could lead to a loss of biodiversity. The current owner of the reserve made it productive growing cacao, thus protecting it from harmful uses.

Gloria Jaramillo
Residence in San Vicente
Rosa de los Vientos
Installation with 2,500 plants
For the last 14 years, artist Gloria Jaramillo has been working with the Women’s Association of Medicinal Plants of San Vicente, with which she encourages the study and popularization of their traditional and generational knowledge. The exhibition comprises an inventory of the medicinal plants they use, as well as a mountain of earth leading towards the inside of the halls, showing the essential element needed for cultivation. Finally, Jaramillo uses 2,500 plants to build a compass rose in one of the patios of the Museum.

Leonel Vásquez
Residence in the Medellin River and its source
Hidrofonías
Sound, video and object installation
During their residence, Vásquez and his collaborators travelled through the Medellin River starting in the center of town and going up to its source in order to record underwater sounds, making a soundscape at several points. Vásquez then made an installation with polluted and pure river waters, and projects images produced by the vibrations created by the sound of the water.

Edwin Monsalve
Residence in Casa Deuxsoleils, Honda, Department of Tolima.
Naturaleza Transmutada
Installation with drawing and biological material
How can one move a landscape without damaging it? This was the question that Monsalve asked himself when he arrived to his place of residence. Naturaleza Transmutada [transmuted nature] was one of the possible answers. Monsalve applied to the flora of the region a procedure known in forestry as aerial layering, a technique of artificial plant propagation in which roots are developed on a stem giving rise to new individuals identical to the parent plant. As it is a slow process, the project was divided into three parts. The first step was a classification of the selected species, which were typical or representative of the place. The second was a reconnaissance of the territory through the process and recollection of elements and data. And finally, the third step -- transmuted nature -- where a process of conversion of nature is shown. 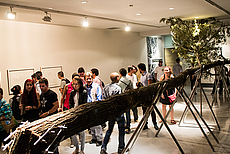