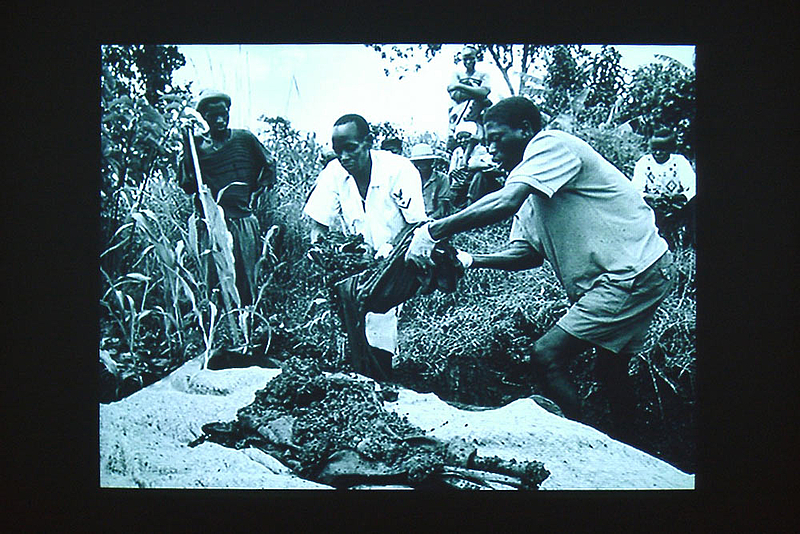 A documentary filmmaker and dissident, Israeli Eyal Sivan has focused on the political manipulation of memory and the fate of the Palestinian people, and particularly on civil disobedience in Israel and the Palestinian Intifada. Since his first film Aqabat Jaber, Passing Through (1987), about everyday life in a Palestinian refugee camp, Sivan’s projects have concerned the politics of memory and the instrumentalization and representation of genocide. (…)
Itsembatsemba - Rwanda, One Genocide Later (1996), which Sivan made with Alexis Cordesse, and which is shown at documenta 11, combines contemporary footage and photographs after the massacres in Rwanda with recordings of radio broadcasts from RTLM (Radio Television Mille Mines) from April to June 1994, inciting people to massacre their fellow Tutsis. The photographs from 1996 give a fragmentary view of the aftermath of the genocide and contrast with the chillingly articulate rhetoric of Christian inspired calls for genocide on the radio.
As with The Specialist, in Itsembatsemba Sivan explores the possibility of presenting archival material with minimal intervention to reveal a deeply destructive level in the human psyche. By going back to the past, Sivan speaks to us of the present and our relationship to history.
(From the documenta 11 Short Guide)