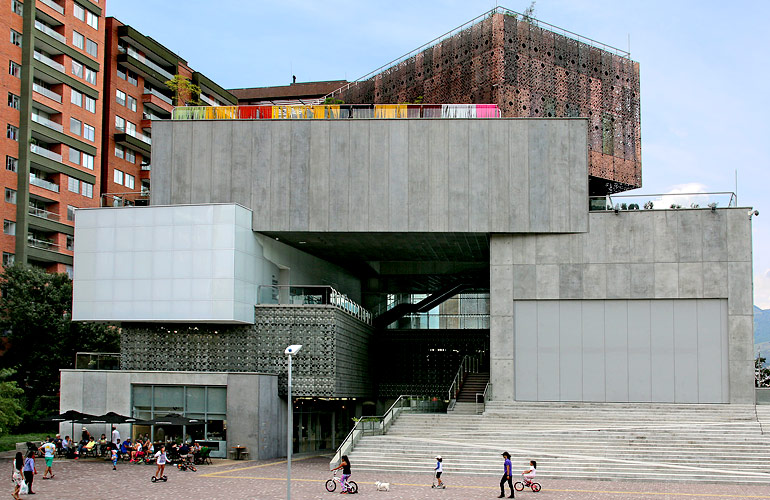 The architectural project, construction in progress, and the Museum of Modern Art

In September 2015, the MAMM will inaugurate a new building that will extend even more its artistic and cultural project. On a total construction area of 7200 sq m, it will host exhibition halls, multipurpose spaces, an auditorium for film and music for 250 people, a space for sound experimentation, a documentation center, storage areas, as well as service and leisure areas.

In the interview with María Mercedes González, the director of the MAMM explains key aspects of the expansion concept, the international submission call, the winning architectural project, and the construction's progress, and gives some details of the museum's program in the first half of 2015.

Pat Binder & Gerhard Haupt: When and why did the MAMM decide to build an extension to the museum, and how did the process go?

María Mercedes González: The decision to build an extension to the museum’s facilities was almost simultaneous to the relocation of the museum to its new home at Talleres Robledo, 5 years ago, in November 2009. Although it was an enormous improvement in terms of space, and also of visibility, projection and programming in comparison to the previous facilities, the museum’s management at that time already saw the need to expand because there was a physical space available, which was the area towards the park and the parking lot. In 2010, an international call was sent out for architects to submit their projects. Around ten firms took part, and one of the key requirements was that the international firm had to establish a temporary alliance with a local firm to be able to participate, and that has been of utmost importance in the whole process.

B&H: What other elements and requirements were included in the call?

MMG: The director of the museum at the time already had an idea of what kinds of spaces the museum needed and what had to be built according to those terms of reference. The idea that space was needed for the proprietary collection of the museum was already there. There was also a need to have a space for musical activities, where we could offer a film program and organize other events. A warehouse was of the utmost importance, as the 2,500 pieces that comprise the collection were in urgent need of better storage facilities. The importance of having commercial spaces that could partially sustain the museum’s operation was also considered. All these elements were included in the call. I think that’s how these kinds of competitions work, giving the architects a list of needs, otherwise things can get difficult afterwards.

B&H: That’s why you’re so surprised to see that some modern museum buildings designed by very famous architects are often not very functional.

MMG: That’s right. That was another criterion explicitly stated in the terms because we internally knew that functionality was paramount.

B&H: Was it tan open call or by invitation?

MMG: It was a direct call to 15 architect firms from all over the world and we got 11 proposals. We had a lot of help from our architect allies. As you know, Medellín is an architectural city, and that good company, that support, was very important for us during the whole process.

Another thing that was very clear was that the new project had to maintain a perfect dialogue with Talleres Robledo, because this is a heritage building, a place with a lot of history, an icon of Medellín’s industrialization process. We wanted the project to maintain a dialogue, not to be a mere prolongation or a replica of Talleres Robledo.

B&H: When you get to this area, you’re surprised to see all new buildings. It’s not like other cities where there is an industrial zone used for or adapted to cultural or recreational use. Maybe that’s where the importance of Talleres Robledo lies, because it’s one of the last icons of an era…

MMG: Absolutely. That’s why the new building --though it had to be a super contemporary building architecturally speaking-- had to maintain a dialogue not only with this heritage site, Talleres Robledo, but also with the rest of the environment.

B&H: Who were the winners and what distinguishes their project from the others?

MMG: The winner was the architectural firm 51+1 from Peru. They established a temporary alliance with the local firm CtrlG, of the very young and very talented architects Catalina Patiño and Viviana Peña. They have won other big projects in the region. They are building, for instance, two educational parks for the government of Antioquia.

Peru’s 51+1 is a group of very young Peruvian architects who were the only international participants to visit Medellín before presenting their project. Maybe that’s where the uniqueness and originality of their proposal lie; an idea inspired by the popular architecture of the more deprived communities in the north of the city.

B&H: How are the construction and the finances progressing? Are you going to be able to meet the deadline?

MMG: The building is progressing beautifully. By December 2014, the concrete structure and façades were ready. As the financial aspect is concerned, we were lucky to have had the support of Medellín’s City Council, and from local companies and foundations. The big challenge in which we’re working on is to infuse life into this new MAMM, to attract more visitors, new art fans, and to make the people of this area of town --which is the Comuna 14, called El Poblado-- have a space of knowledge and enjoyment here. Our great objective, our mission, is that the people of Medellín find inspiring and transforming experiences around contemporary culture in this place.

B&H: Which are the key points of the new building’s concept and how is it going to work with the existing building?

MMG: The new halls will be destined mainly to the museum’s proprietary collection, but we are also aware that showing our collection without a dialogue with other works is rather pointless. The MAMM’s collection, though it contains iconic works, very important works in the history of Colombian art from the second half of the 20th century, is a collection in which many pieces from contemporary art are missing.

MMG: Colombian. Our collection was built thanks to the generosity of the artists. In its 36 years of history, the museum has not bought a single work. We haven’t had a budget for acquisitions for different reasons because the priority has always been the operation and working of the museum, and keeping the programming running has its implications. To strengthen our collection is a challenge. We’re aware of that fact and we know we have to work under creative, innovative formulas; for instance, through people willing to support the museum with donations, which is a very common formula, mainly in the United States.

B&H: Last year, you told us that, among other works, you’d like to collect installations that were made specifically for the museum’s exhibitions. Have you considered establishing cooperation with artists through grants, specific productions/subsidies so that those works stay here, for instance?

MMG: Well in fact, that already happened in the museum with the Arturo and Rebeca Rabinovich art salons between 1981 and 2003. During those years, in its old venue, the museum created a platform for the circulation and dissemination of artists under the age of 30, and the idea was more or less what you’ve just described. Many of the works we now have in our collection come from that experience with the salons. So the museum is not alien to that kind of formulas. We need to have a plan, a structured plan of acquisitions with very clear objectives, but we also need to be very aware of our economic possibilities and of the effort involved. The arrival of our new curator, Emiliano Valdés, is instrumental to the development and implementation of all these ideas.

B&H: The present exhibition of Alvaro Barrios’s work will continue until March 2015 and the opening event is scheduled for September 2015. What other exhibitions are you planning for the first half of the year?

MMG: In April we’ll have and exhibition of works by the Utopia group, which is a group of architects and artists of Medellín. They are very important in the history and the life of the museum and the city. They did the renovation of the Talleres Robledo building; they are behind all this. The exhibition is called Le Corbusier en el río Medellín [Le Corbusier at Medellín River] which was shown in Bogota, at the Alzate Avendaño Foundation. But here it will be bigger, taking into account this recent history, because a big part of the exhibition will be devoted to the renovation of Talleres Robledo as the MAMM’s venue.

There’s also a new program being developed at the museum, called Programa C. It’s a project that will be held at the special projects hall, the small hall at the entrance. The idea is for it to be a platform for the dissemination, promotion and validation of emerging artists, understanding the emerging part not regarding an age range but an incipient career. The guest curator will have to do some field work, as emerging artists do not appear anywhere, do not circulate, and nobody has written anything about them.

Our first guest curator in 2014 was Sebastian Ramirez, from Cali, who curated ArteCámara in ARTBO in 2013. He selected Tatyana Zambrano (Medellín, 1982). Our second guest curator was María Wills (co-curator of Arco Colombia 2015) and she chose Víctor Garcés (Medellín, 1978). His exhibition, Recuerdo sin nombre[Nameless Memory], will continue until March 2015, and the 3rd version of the program, which is already defined, is going to be done together with the opening of Utopia. Cristina Lleras, who curated the Luis Caballero Award last year, has also been invited. After doing her field work, she decided to work with Gabriel Botero, also from Medellín.

Maria Mercedes González Cáceres
M.A (Master of Arts) in Media Studies at the The New School in New York, specialized in Cultural Studies, and graduated in political sciences from the Universidad Javeriana. Worked as communication and cultural attaché at the Colombian Embassy in Argentina between 2004 and 2008. From 2008 to 2010, she was Consultant for the Ministry of Foreign Affairs. Since October 2012, Maria Mercedes González is the General Director of the Museo de Arte Moderno de Medellín.

Photos
The expansion in progress, and the Museum of Modern Art 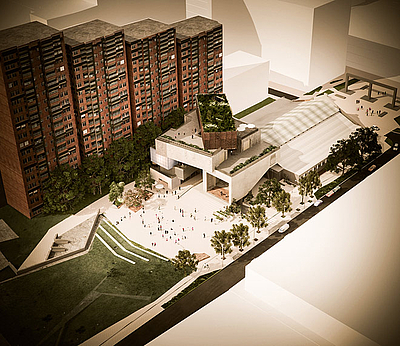 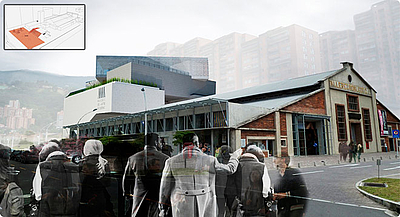 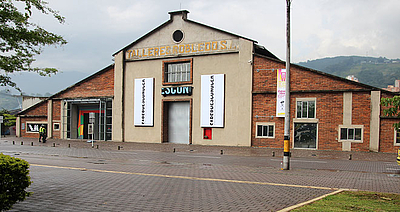 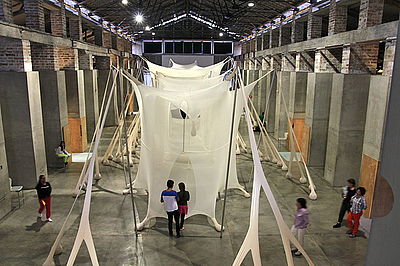 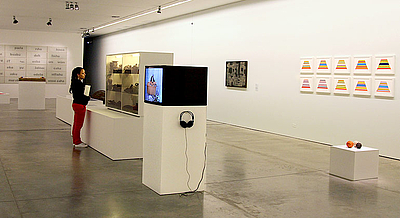 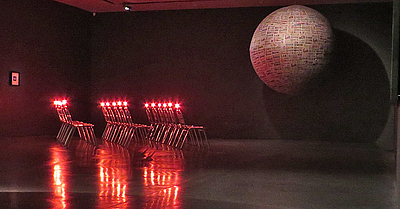 Álvaro Barrios at the MAMM