Álvaro Barrios: The Legend of Dreams

The Legend of Dreams. Retrospective of one of the pioneers of conceptual art in Colombia. 2014/2015, MAM Medellín. Curator: María Belén Sáez de Ibarra 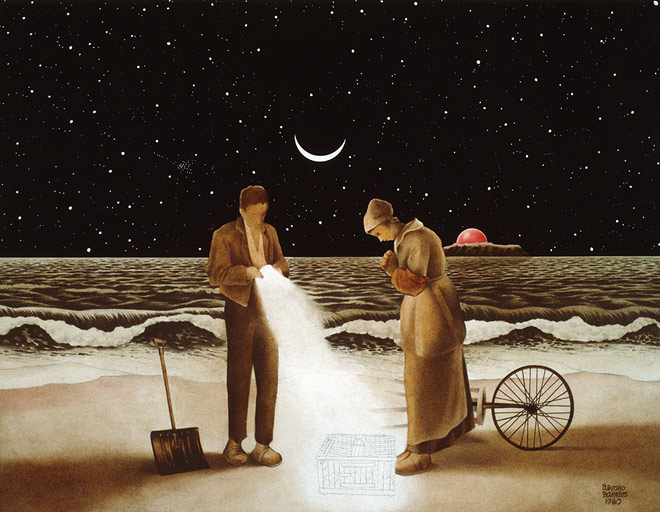 On November 26, continuing with the curatorial policy of recognizing the career of important Colombian artists and in closing the exhibiton program of the year, the Medellin Museum of Modern Art inaugurated the fifth edition of its series Homages MAMM dedicated to the work of Álvaro Barrios.

Key elements of the exhibition

Álvaro Barrios last presented his work in Medellin two years ago at the Galería de La Oficina. Today, he returns to the city with this exhibition, that apart from having a series of pieces that speak of his work in the last 50 years, includes three new artworks: two large-format installations, El mar de Cristóbal Colón and Dick Tracy y la Esfinge de Diamantes; and a nine-meter painting titled <iphasize>La multiplicación de los cuadros</iphasize>.

It is worth mentioning that curator María Belén Sáez de Ibarra approaches Barrios’ work from several angles she considers essential to understanding his work: esoteric research, spiritualistic practices and the installation and conceptual dimension of his work.

As the curator says, “It’s not a chronological exhibition. It’s not categorized by periods. Rather, we’ve built a kind of universe of the artist. The main theme of his work is a critique to art collecting and everything related to the commercial aspect of art. Álvaro Barrios’ appropriation art is insurgent, rebellious.”

This exhibition includes, among others, as the artist explains: “A series of documents that clearly illustrate where my interest on comics comes from. The public, the critics or the journalists, I don’t know, thought that perhaps it could come from pop art. It has nothing to do with pop art but with my childhood. A few of the works explain how I’ve drawn comics since I was 12.”

This exhibition encompasses nearly fifty years of Álvaro Barrios’ work, starting from the beginning of his artistic career in the mid-sixties. From the large body of work of all these years, the curatorship has tried to give privilege to his installations, as the artist never before in his long career has had his installations as the main focus of his exhibitions. The exhibition comprises from works of tiny format to others of ample use of space, all of which are included in another big installation, which is the exhibition itself, thus recreating Barrios’ world, which flows between the micro and the macrocosm. This dynamic stirs the exhibition towards unknown associations between the exhibited works.

The focus of this revision has been put on an aspect that has gone almost unnoticed on his previous exhibitions but which is perhaps the one that can illustrate better Barrios’ individual process of growth as an artist and help us understand deeply his creative process in harmony with his process of personal knowledge and learning: we are talking about Barrios’ vision of the creative process as functioning in a wider constellation, beyond the ego and the conscious mind (in the area of no knowledge) and his idea that all existence is a habitat of multiple relations in perpetual motion that surpass what we have socially imagined as time and space.

His process in this journey towards depersonalization and other ways of comprehending that we are not self-sufficient or the center of the universe, has taken him towards the esotericism implied in spiritualistic practices.

This flux of things in constant instability and change is captured by Barrios’ creative process in a strategy that underlies all his work: appropriation. The readymade through which the wheel is turned in fluxes where things vanish, losing their “original” meaning and uniqueness to reconnect and renew themselves, invested of new nature and meaning.

Appropriation conceived in this way is part of his essential vision of art. The kind of readymade used by Barrios in the majority of his work not only involves works of art made by other artists but also object-images of culture. In his appropriation game, he brings up works by Duchamp apart from inserting in his works milestones and images from the history of art, including pop culture icons such as superheroes, characters, the style and other resources of comics, and even songs and poems.

It would be fair to say that the majority of his works function with multiple and simultaneous appropriations or, in the style of Duchamp, as reciprocal readymades, coming from the culture glimpsed by our times. In this way, his artistic work jumps over the frontier towards the expanded field of culture, in the life of collective images.

But this life of collective images is recreated and shared by Barrios in something beyond normal; something expressed and lived through the world of dreams. That oneiric world loved by poets, philosophers, magicians and occultists that takes place in the sleeping conscience. From the emulated dream, from fantasy, Barrios seeks to insert in the experiences of the society inside us, a critique, a self-knowledge of it. In his game of time shifting, he resorts to something similar to an archaic futurism, as a critique from the present, where the past houses the things to which society, in its causal flux, would be devoted to in the future.

The oneiric world reasserted in this revision is based on the relationship the artist establishes with the unknown, with the break in the sequence of time, with esotericism, and with the coexistence of all these factors in the material world, perceived by him as a world that houses, at the same time, other possible worlds.

The exhibition points out the strong presence of references to Marcel Duchamp’s work as a leitmotiv of Barrios’s work. The appropriation of Duchamp constantly done by Barrios operates as a contradiction: it is open to the games that Duchamp’s own work implies. The appropriation operation has been to question and push to the limit of provocation the notion and the values that the work of art has for society and for the artists themselves.

We could look at the relationship between Barrios and Duchamp as through a mirror that reflects his empathy he feels towards Duchamp, the artist and the thinker, and their shared interest for the areas of no knowledge and esotericism. Also there, the irony that Duchamp frequented so much would be reflected. With humor, Barrios likes to point out the fetishism of commerce, of collecting and of an art system that tends to consecrate, and trivialize at the same time, the works of art that invariably go through it.

Álvaro Barrios, an outstanding draughtsman, is one of the pioneers of conceptual art in Colombia, and one of the most important Colombian artists of the last decades. 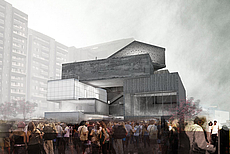 Expansion of the MAMM, Medellín

A new building of the Museum of Modern Art of Medellín, Colombia, will be inaugurated in September 2015. Interview with director María Mercedes González; images of the design, construction site and MAMM.