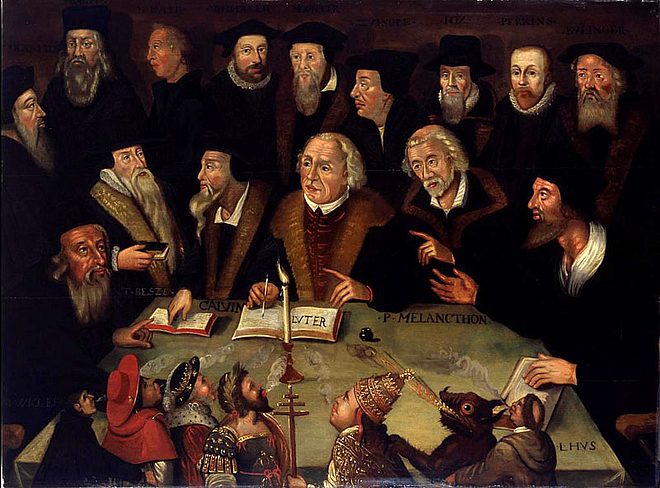 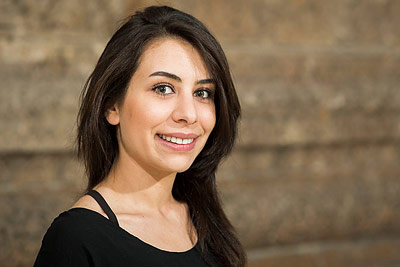 Luther surrounded by reformers
Germany or Netherlands, 1625/1650
Oil on wood, 67,5 x 90 cm
In the middle sits Martin Luther, to his right is Calvin, to his left Melanchthon.
German Historical Museum

I chose to discuss this particular painting because of the idea standing behind its representation of the 16th century schism between the Catholic Church and the Reformers who became the founders of Protestantism. A horrendous war that endured for 30 years. The way it is portrayed here is a timeless example of how religious feuds are conceived. It shares similitudes with conflicts currently happening worldwide, including those in the Middle East.

In this painting, the upper side portrays notorious Protestants gathered around Martin Luther. They all appear as wise and honourable men standing tall and looking down on the characters across the table: small strange-looking men from the clergy and the state, sitting together. One of them, a monk, even has a weird fire-spitting monster on his lap. This monster is Satan, and his presence was meant to signify the Catholic Church and its relationship with political powers as evil. In essence, the painting shows that the way in which religious conflicts are conceptualised has not changed for centuries: people consider those who have a different faith or who do not agree with the way they worship to be nothing less than satanic conspirators.

I have found that this painting creates a dialogue with visitors coming from the Middle East. It helps them realise that Germany also experienced religious wars and that the country evolved by breaking away from these conflicts and accepting the views of others. The painting opens a discussion in which people can question the way in which they have previously approached this subject. It really creates a bridge between cultures, which is what Multaka is all about.

Salma Jreige
Law graduate from Syria. Graduated from Damascus University-faculty of law in 2013. Through university studies worked as an English tutor. In 2013 started working voluntarily with the Syrian feminist NGO " Syrian Women's league ". Moved to Germany in July 2014. In 2015-16 worked as a Language assistant with Frauen Computer Zentrum Berlin (FCZB) in a german language course for refugee Women. Was employed by BBQ Baumann Bildung und Qualifizierung as Job Coach for Integration in the german Job market. Started Giving guided tours in the German Historical Museum as a part of Multaka Project in 2015 and worked as a Project Kordinator for Multaka for February-March 2017.

Luther surrounded by reformers
Germany or Netherlands, 1625/1650
Oil on wood, 67,5 x 90 cm
In the middle sits Martin Luther, to his right is Calvin, to his left Melanchthon.
German Historical Museum