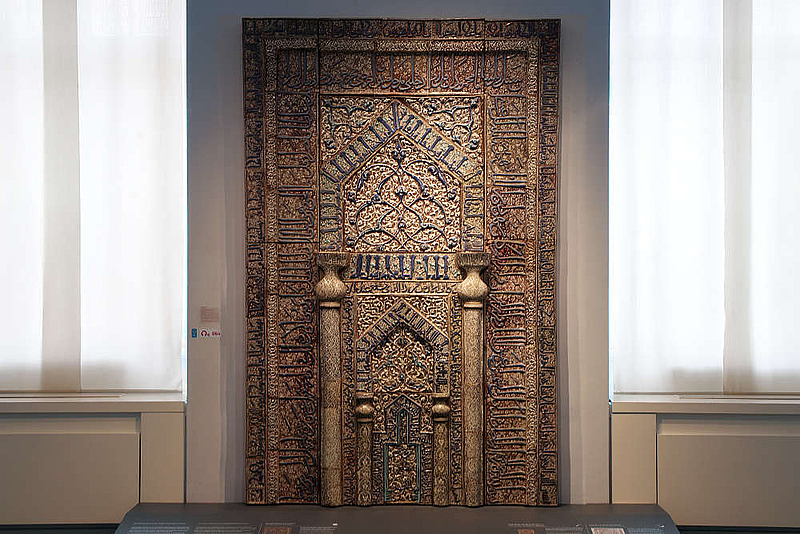 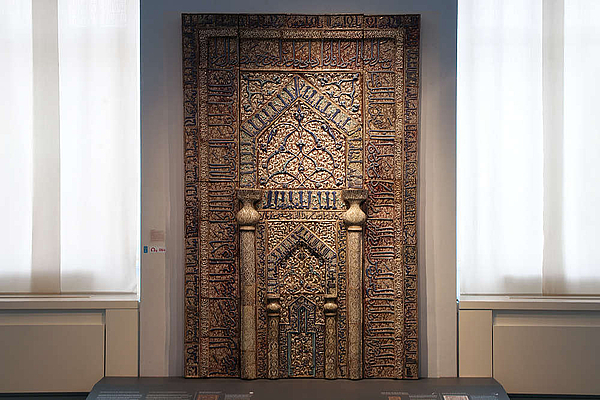 The prayer niche (miḥrāb) comes from the Maidān mosque in Kashan in the Iranian province of Isfahan.
Dated by Master of Hasan bin ʿArabschah to the last decade of Ṣafar (623, corresponding to 21.2. to 1.3. 1226)
Quartz frit, modelled and painted under transparent colorless glaze, chandelier painting
height 280 cm, width 180 cm

A prayer niche in a mosque indicates the direction of prayer to Mecca. The example from Kashan corresponds to the flat type characteristic of medieval Iran, only the columns are semi-plastic. The flat niche form is repeated here in three stages. This miḥrāb consists of 74 individual tiles, which were embossed with models, painted and glazed. Large blue inscriptions and patterns as well as small turquoise blue fillings stand out effectively against the dominant chandelier painting, which shimmers in various golden-brown tones. The blue tones were applied before the glaze, while the chandelier painting was applied to the finished glaze, which was fixed in a further firing.

The largest single field is the plate above the large capitals. It shows a floral pattern as well as a writing band tapered at the top (Koransure 11, verse 116), the style of which is repeated in the Islamic creed between the capitals: "There is no god but God, and Muḥammad is his prophet". The other inscriptions, which are partly executed in a steep and partly in an italic style, reproduce texts from Quranic suras 17 and 76 that refer to prayer, as well as texts from suras 97, 2 and 112 that affirm the Muslim faith.

At the end of the large frame inscription the master al-Ḥasan bin ʿArabschāh has added his signature and the date of creation.