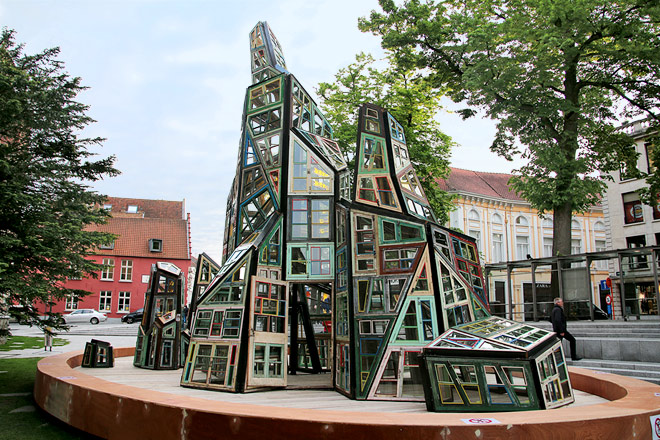 A garden. A Chinese rock garden with a miniature landscape. A small mountain landscape, a large Bonsai. But constructed from demolition material. With windows from demolished, historic Chinese buildings. The remains of districts that were flattened during the unstoppable growth of the umpteenth Chinese megapolis. That is what Song Dong created in Bruges.

A garden with a double meaning, to put it mildly. There is the ancient tradition of the Chinese Penjing gardens and there is the relentless urban growth of today's China that dispenses with heritage. In this universe that is both exotic and cruel, beside the ancient Bruges Saint Saviour's Cathedral.

The tension between transience and the urge for conservation is a theme that emerges more often in Song Dong's work. And the theme of nature preservation also penetrates this garden sculpture in Bruges, and this is certainly connected to the artist's interest in Chinese philosophy and Taoism, which strives for Wu Wei, a symbiosis with the forces of nature.

However Wu Wei means 'inaction', a form of passive, meditative oneness with the environment. The fact that this notion stands above the piece as a title in large neon letters also has a double meaning of course. Is he striving for a defenceless meditation on respect for heritage? Or on the disrespectful, aggressive growth of our new cities?

In a former piece, Eating the City, the artist constructed models of cities such as Hong Kong, Shanghai and London out of food. They were edible cities that could literally be devoured, the ultimate primary form of consumption and destruction. At the same time in their insatiable hunger the cities gobble up older cities.