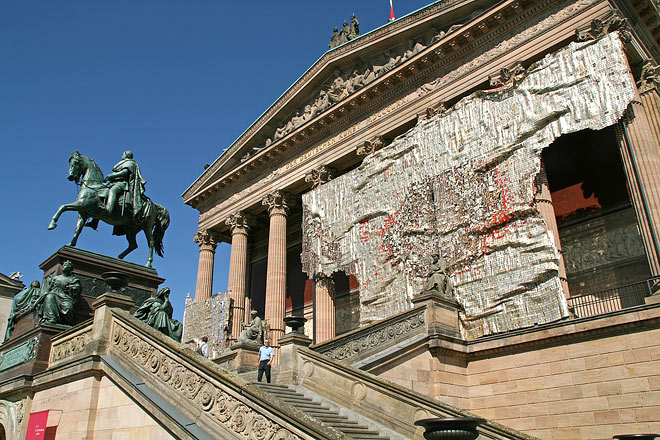 Anatsui's work Ozone Layer and Yam Mounds is a large, site-specific sculpture in the columned vestibule of the Alte Nationalgalerie that is reminiscent of a tapestry. It is mounted directly under the mighty pediment, the cornice of which bears the golden inscription DER DEUTSCHEN KUNST MDCCCLXXI (To the German Art 1871).

With his extremely precious-looking, very light and yet gigantic curtain-like aluminum sculpture, El Anatsui shows an artwork that inscribes an additional story onto this temple-like structure with its great national, virtually "holy" meaning. The work's incredible dimensions, the edifice's monumentality and the implicit range of colonization are presented to the public. The sculpture is knotted together like a net and, thanks to its fabrication technique, contains a metaphor, according to which past and present belong together. This makes clear that we cannot put aside our responsibility for the colonial history. Therefore, the historic discourse about issues pertaining to the presence of German and non-German art in the Nationalgalerie is relevant. It appears that El Anatsui's work under the golden letters not only provokes said discourse but it raises its level to the perception of the reality of our cultural and economic networks and focuses on the African memory.

The Alte Nationalgalerie (Old National Gallery) can be traced back to a sketch by King Frederick William IV from the year 1841. The building was designed by Friedrich August Stüler, and after his death (1865) completed by Johann Heinrich Strack between 1866 and 1876. The inscription at the cornice "DER DEUTSCHEN KUNST MDCCCLXXI" ("To the German Art 1871") refers to the formal unification of Germany into a politically and administratively integrated nation state, in the year 1871.

The building hosts the National Gallery's collection of paintings and sculpture from the time between the French Revolution (1789-1799) and the First World War (1914-1918), between Classicism and Secessions. 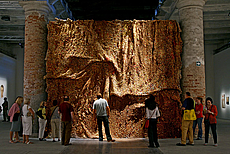 El Anatsui is the recipient of the Golden Lion for Lifetime Achievement of the 56th International Art Exhibition of the Biennale di Venezia, 2015.