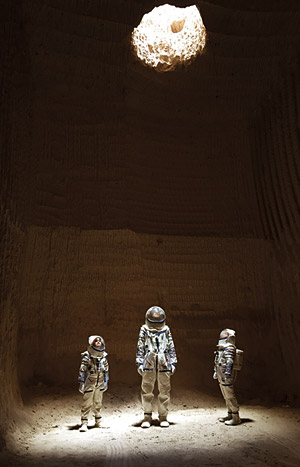 Halil Altındere developed the Space Refugee project for Neuer Berliner Kunstverein, which in the light of European defense against immigrants and at some ironic distance proposes to use the cosmic space as a haven for refugees. One of the exhibition’s key features is a film about the former Syrian cosmonaut Muhammed Ahmed Faris, who in 1987 with the Soviet spacecraft Soyuz TM-3 went on a seven-day journey to the space station Mir. Today the former hero of the USSR and supporter of the democratic opposition movement against Assad lives as a refugee in Istanbul.

The exhibition Space Refugee aesthetically borrows from the art of Socialist Realism and refers to the heroic depictions of Soviet cosmonauts. So there is a kind of hagiography about Muhammed Ahmed Faris in the form of painted portraits, a realistically crafted silicone bust and a documentary video. The vision of a life in space for the refugees is substantiated with specially designed spacesuits from a fictitious "Palmyra"-space mission, a planetary rover and a virtual reality video.

Halil Altındere belongs to a generation of artists, who substantially took part in Turkey’s cultural awakening in the1990s—as an artist, curator and publisher. His artistic practice is directed at the socio-political remodeling of Turkey, the promotion of an emancipatory process and an opposition to repressive and nationalist developments within state and society. His works also receive great attention for their direct and open criticism of the military apparatus and the government policy as well as of the patriarchal and nationalist structures within Turkey. The expectable protest from the state authorities Altındere deliberately takes into account. Migration, identity and gender, but also questions about the influence of Western contemporary art trends within Turkey’s contemporary art scene characterize his work.

The video work Wonderland (2013), for example, which was created just before the uprisings at Gezi Park, addresses the gentrification of Istanbul. The focus of the film is on the Romahip-hop band Tahribad-ı İsyan, who gives a voice to the resistance against the displacement of entire parts of the population from the city. In 2016, Neuer Berliner Kunstverein, together with Nordstern Video Art Center and for the collection of n.b.k. Video-Forum, co-produced the video work Escape from Hell, which was made in Cappadocia and Istanbul and is an allegory of the increasing struggles between secular and religious forces in Turkish society. Wild chases, aspects of queer culture, captive balloon flights and a karate disciple in a mosque, who lifts off during his Koran studies in a Yoga position, these are the elements of Altındere’s absurdly ironic as well as sharp-tongued work. It links to the previous work Angels of Hell, in which Atatürk experiences his rebirth. With black humor Altındere captures the political routine in Turkey at the beginning of the 21st century and enunciates the role of the artist being the critic of social conditions.

Until October 8, 2016 and in parallel with the exhibition at n.b.k., the work Köfte Airlines (2016), which was especially created by Halil Altındere for HAU Hebbel am Ufer’s festival The Aesthetics of Resistance – Peter Weiss100, can be seen, located in front and inside of HAU2. For Köfte Airlines Altındere, in cooperation with refugees living in Turkey, staged a photograph showing a larger group of people sitting on the back of an airplane.

Publication
With the exhibition and as part of the series "n.b.k. Exhibitions" there will be a publication by Verlag der Buchhandlung Walther König, Cologne, with a preface by Marius Babias and articles by Halil Altındere, Kathrin Becker, Marenka Krasomil, Hans Ulrich Obrist, Ana Teixeira Pinto and Misal Adnan Yıldız. 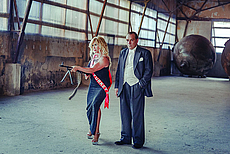 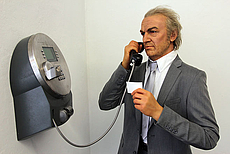