The Pavilion of Iraq at the Venice Biennale 2015 is on view at S.M.A.K. Ghent from 28 May to 4 Sept. 2016. Introduction of curator Philippe Van Cauteren and photos of the exhibition in Venice. 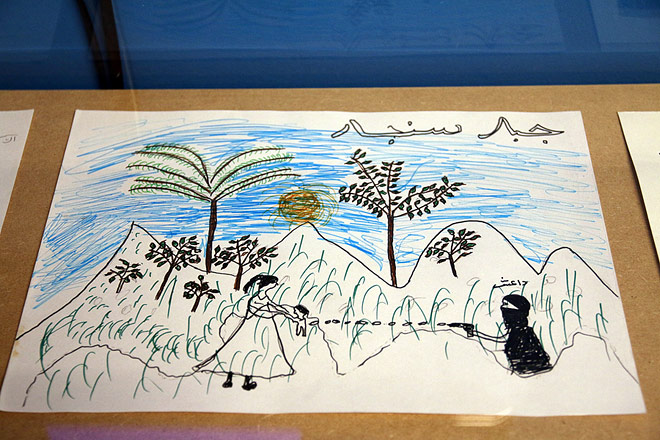 From 28 May to 4 September 2016, the exhibition Invisible Beauty, conceived for the Iraqi Pavilion at the International Art Exhibition of the Venice Biennale 2015, is on view at S.M.A.K., Ghent, Belgium.

Founded in 2012 by Iraq art and culture enthusiasts, the non-profit, non-governmental Ruya Foundation for Contemporary Culture in Iraq embarked for the second time on the realization of an Iraqi Pavilion at the International Art Exhibition of the Venice Biennale this year. Invisible Beauty refers both to the subjects in the artworks and to the persistent invisibility of Iraqui artists in the international circuits. Curated by Philippe Van Cauteren, Artistic Director of S.M.A.K., Ghent, Belgium, it features works by Latif Al Ani (* 1932), Salam Atta Sabri (* 1953), Rabab Ghazoul (* 1970), Akam Shex Hadi (* 1985), and Haider Jabbar (* 1986). They were selected by the curator following a journey to Iraq that was organised by Ruya and carried out in company with Foundation's Chair and Co-founder Tamara Chalabi, as well as visits to artists working in the Diaspora.

The exhibition also features a display of over 500 drawings made by refugees in northern Iraq. Renowned Chinese artist Ai Weiwei was commissioned to select a number of these drawings for a publication that was launched during the Biennale opening. In collaboration with Mousse Publishing, Ruya Foundation also produced a catalogue accompanying the Pavilion's exhibition. In his curatorial text in the publication, Philippe Van Cauteren gives a brief introduction of the artists' works:

The photographs of archaeological sites by Latif Al Ani of the late 1950s and the 1960s rise in significance against the backdrop of current dramatic events. Back in those days, it was the artist’s intention to document a society on the turning point toward the modern era. Today these photographs function as critical agents against the tragedy of decay and the loss of dignity and sophistication. Al Ani’s work is a witness in black and white of a utopian society, a society that is now swept away by the irrationalities of war and religion.

This strongly contrasts with the diary of drawings by Salam Atta Sabri. Letters from Baghdad can be understood as introspective annotations in which the tragic circumstances of a country collide with the personal drama of an artist who feels the imperative to make art in a context that is marked by other-than-artistic conditions.

And these other conditions are often generated abroad by different and other coalitions. By giving a voice to the people, Rabab Ghazoul reflects on the notion of the public and its representatives. Through the simple gesture of recording the voices of anonymous citizens of England as they repeat a speech by the former British Prime Minister Tony Blair, the artist deconstructs notions of truth, guilt, and responsibility.

In the work of Haider Jabbar, faces become mute following the brutal act of decapitation. The artist reflects on the body in pieces by making an archive of decapitated heads, victims of violence. His artistic language betrays a fascination with the work of some of his older artistic peers, but the difference can be found in the way he “translates” what he lived through in an image with universal appeal. Each ductus embraces tragic fragments of reality.

Although it was never the intention to make an exhibition where the current tragic reality of terror is a theme, I am more than delighted to see that the beauty of the works in this exhibition extends to the artists’ courage with regard to engagement. In that sense, one cannot but appreciate the efforts of Akam Shex Hady in which he photographed people fleeing from ISIS in a subtle and delicate manner. The black piece of cloth sneaks into the image as a threatening noose around the people captured in the nudity of their tragedy.

Invisible Beauty gives voice to different generations of artists, all of whom are prisoners of the decay of a country. At the same time, each of them believes that as an artist, one can take a position, one can assume a responsibility that is different from the orthodox belief in pure beauty. These artists are anchoring their artistic practices in a complex turmoil of loss, identity, memory, and beauty. Invisible Beauty is an exhibition that whispers, that gently articulates. Against the apocalyptic background of Iraq’s recent past, artists still find the courage to engage in work where the individual artist is independent from any form of academism, and dependent on a dense reflection on how art relates to society.

Extract from: Letter to Tamara Chalabi, by Philippe Van Cauteren. Published in: Invisible Beauty, Ruya Foundation and Mousse Publishing.
Nafas Art Magazine thanks Philippe Van Cauteren for his permission to include the extract of his text in this feature.
17 image pages, more info

The project looks at monuments, (by) architects, (for) governments, and ideals' tensional relationship to ideologies in times of shifting states. Exhibited at the 56th Venice Biennale 2015.