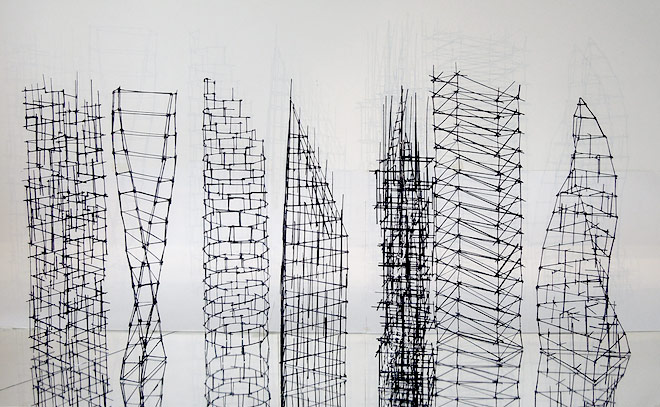 The artist and his public are bound together by collective memory. A work of art only exists in the eyes of its maker and of those who see it and feel its significance. Artists, like everybody else, carry within themselves and throughout their lives memories and emotional patterns which are largely based on geographical, national, tribal and family backgrounds. Historical and personal events interact constantly enriching and shaping life experience, triggering internal processes that have to be defined and formed. The artist has the ability, the skills and mental tools to express, to externalise subjective experience by converting it into creative energy. The artist's work is an act of transformation in which subjective experience is expressed in a form that gives it a wider meaning and generalizing validity. In this process the artist uses his perception of past and present, his reality, as stimulus. His ability to interpret it is at the centre of his creative choices. This position has to be defended again and again against prevailing conventions and prejudices. To reach that inner independence, to find unprecedented forms of expression and to achieve productive coherence, is the result of permanent alertness and search, challenging and probing reality and its manifold variations and possibilities.

Walid Siti was born in Duhok, a town in Iraqi Kurdistan. He began his studies of painting at the Institute of Fine Arts in Baghdad and continued to pursue the art of print-making at the Academy of Fine Arts in Ljubljana, Yugoslavia. He has lived and worked since 1984 in London but remains emotionally attached to his roots being in constant contact with family and friends in his homeland, which was for a long time affected by war and is currently on a hurried but fragile road to recovery.

In his retrospective exhibition at Leighton House of 2008 Siti exhibited paintings reminiscent of the textures of the earth, the weight and colour of rocks and afterimages of the eternal mountains of Kurdistan. "The tragic circumstances of his homeland, the remoteness of the landscape, and the emotional imprint of his early surroundings provide much of his inspiration. In his work Precious Stones he emphasises the mystical importance of stones, sacred, venerated rocks and mountains that have been for centuries the refuge of the Kurdish community, providing sanctuary from submission, massacre, division and destruction." [1] A series of drawings from this period Family Ties (2004-2008) depicted the organic structures of family networks anchored in nature, reflecting the rhythm of the seasons, of life and death. Here he dealt with one of his central themes, namely the individuals' place in the group, the we and me and the them and us. House and family were remembered as places of safety and continuity, but appeared already then threatened by unnamed forces, external stresses and tensions.

Living in permanent exile exposes Walid Siti to the pains as well as the benefits of alienation, which have given him critical perspectives, self-awareness and a heightened sense of identity. "We live in a peculiar time, in one world, but in between many different realities. I am a product of these complexities. Despair, escape, hope and aspiration are reflected in my work. I have lived in different places, under different emotional conditions. This at times transient state of existence, enabled me to be a witness and carrier of memories of many changes and experiences that influenced differing emotions, of fear and despair, of injustice and oppression, but provided also some moments of hope and human understanding."

The artist's identity is frequently tested as he sees in the post-war reorientation and reconstruction of Iraqi Kurdistan, in particular his hometown Duhok, the emergence of atypical social and economic structures based on the capitalist models of Western Europe and the United States. Emanating from the new wealth of the oil-rich states of the Middle-East, a wave of dramatic change has taken hold of an entire region, reaching from the Gulf to the Caspian Sea, embracing Iraq, Syria, the Kurdish region and Turkey. The frenzy of the petrol boom, waste and greed, dictate the shape of present developments and the uncertainties of the future. A sense of discontinuity amid the loss of familiar standards, proportions and values prevails.

Under the banner of modernization, old city neighbourhoods are demolished and populations uprooted. Speculators force gigantic building programmes upon the municipalities. In imitation of Western architectural styles and planning models, foreign systems of social organisation are being imposed, undermining a traditional order of life, taking family cohesion and old social structures to breaking point.

Walid Siti's artistic endeavours stand up against that wilful destruction of the link of humanity with its origins and history. "In the last two decades my work turned towards restraint forms of abstraction, a paring down, a concentration of forms, which derived from cultural and historical references and contemporary phenomena. The old geographical and social landscape of the Kurdish region witnessed in recent times some of the worst devastation in history. In my work I process and develop shapes and forms that may echo those tragedies and pains. Memory and observation have a major impact on how I formulate my ideas."

Siti lives and creates between the here and there, between the possible and the impossible. It is his instinctive knowledge of limits and contradictions within the world we live in that lead him towards a deep search, reflection and visualisation of his inner images, manifest in metaphors, signs and symbols that appear in his drawings, paintings and constructions.

In his latest works he presents alternatives to the destruction he has witnessed. He offers transparency and light as an alternative to the solidity and dense brutality of the city of skyscrapers; he believes in positive action and good examples. He sets the nobility of the mountains and valleys against the artificial dynamics of urban sprawl. In his panoramic painting City Mountain and the installation Cityscape he creates an antithesis to the invasion of nature by architecture of concrete and steel that has first and foremost the purpose to support the financial and political powers that rule the land.

The way the New Babylon competes with the expanses of the ancient landscapes, with the mountains in scale and material presence, is the subject of two large triptychs. Both paintings, like most of Siti's recent works, use a limited range of colours, mainly earth tones, ochre, burnt umber and strong light and dark contrasts accentuated by layers of white and black linear structures. In Things to Come a net of urban construction obscures the mountain, while in the case of Three Points of View the mountain domineers, in fact, seems to re-conquer the city. The physical environment, dictates a way of life observes Siti: "I feel that the population is entrapped in these cities, in the system they represent. People become part of that structure and get more and more detached from the idea of community. Fragmented in small groups of little social cohesion the population submits to the hierarchies of power. The organisation of a historically grown city can symbolise a place which gives space for individual development and society's self-realisation. Architecture from our cultural heritage like pyramids, ziggurats or minarets demonstrates this idea. The relationships formed in our culture reflect a stratified social structure. For this reason I have maintained my interest in the ancient sites, buildings and monuments of the Middle East. I want to understand the historical context in the hope that it may shed light on our current history."

Years of aggression, war and religious infighting have created a state of permanent instability; even the current construction boom is pursued with aggression. In his series of paintings The Seven Towers, one of which is included in the present exhibition, the vertical drive of ambition distorts the traditional spiral form. There are ambiguities that question the stability of the towers: are they under construction or already in the state of decay? Upward Rhythm, shows a tower tumbling. It is propped up by ladders and scaffolds but its internal spine is bending, ready to break. The artist gave it the shape of a leaf, indicating that all human creation will fall, eventually slipping back into the lap of nature. The sculptural installation Seven Towers is a sequence of upright structures of great intricacy, towers or skyscrapers, echoing scaffolds on building sites. Painted black they appear strong, metallic, flexible, but they are made of straw which emphasise their fragility.

Walid Siti constructs his works with forms always reminiscent of the essential relationship of humanity with nature. They are 'constructions of his vision' revealing contrasts and discrepancies of contemporary urban existence. His art demands from the viewer a kind of 'constructive viewing', an active way of seeing, whereby the viewer discovers viewpoints, positions, pathways into the meaning of the works, of closeness and distance, finitude and infinity implied within them. He mobilises and engages the viewer.

Filmmaker, artist and curator from Berlin, based in London.

© Text from the catalogue for Walid Siti's exhibition "New Babylon" at Galeri Zilberman, Istanbul, 12 November 2014 - 10 January 2015.
Nafas thanks Galeri Zilberman and Lutz Becker for the permission to re-publish the text.

Walid Siti is represented by 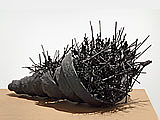 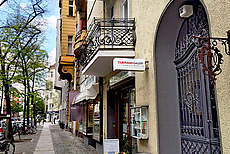 Presentation of the Zilberman Gallery with spaces in Istanbul and Berlin, and some of their exhibitions and artists.