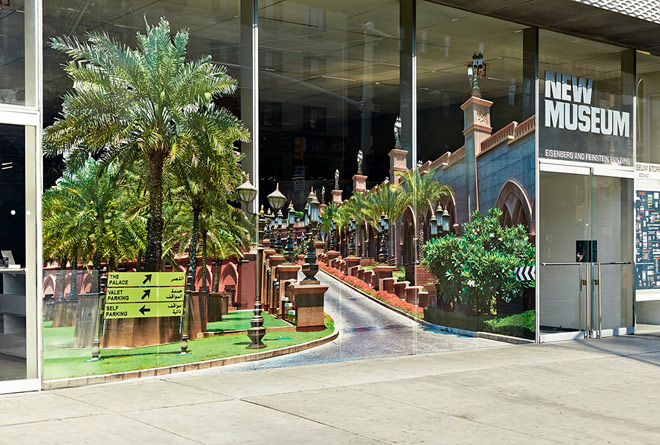 Just a few days after violence broke out again in Gaza, which suddenly turned into the theater of devastating air strikes, the New Museum of New York opened the exhibition Here and Elsewhere, whose title is inspired by Jean-Luc Godard, Jean-Pierre Gorin, and Anne-Marie Miéville's movie, released in 1976. Begun as a documentary about Palestinian revolutionaries, the complex essay questions the role of images in inspiring or annihilating political consciousness. Though the diplomatic situation hasn't changed much in nearly 40 years, the purpose of the show is not political – unless we consider raising consciousness about an underexposed art scene, moreover often observed through a Western Orientalist lens, to be political.

Ala Younis explores this specific question in her project poetically titled An Index of Tensional and Unintentional Love of Land, an exhibition within the exhibition in which she juxtaposes artworks, photographs, and documents of visual culture that undermine stereotypical depictions of the Palestinian conflict and challenge dominant media representations. Her selection includes works from both the Western and the Eastern perspectives, among them photographs by photojournalists Bruno Barbey and Raymond Depardon from Magnum Photos, movie stills, propaganda posters, political tracts, a map of the Arab world printed in Egypt in 1967, and other features of Palestinian popular culture and visual history, local and international. I recently came across an article in the French newspaper Le Monde introduced by "Plasticiens" (visual artists) that I first read "Palestiniens" (Palestinian artists). I wondered if my confusion was provoked by the rest of the title, which continued: "... seeking status".

Expanded to Arab artists, giving a well-deserved status is precisely the point of the exhibition as a whole, curated by the team of the New Museum and spanning the many floors and lobby of the wide white cube imagined by architects Kazuyo Sejima + Ryue Nishizawa. This is a significant step after the museum gave, in 2011, a compelling taste of art coming from the Middle East through its Museum as Hub program, in partnership with the Beirut Art Center. That exhibition was quite small, though, set up in the top floor room of the museum and focused exclusively on Lebanese artists and problematics. A strong statement, Here and Elsewhere defies the temptation to aesthetic generalization and exotic narrative. "Knowing very well what is at stake in representation, both in photographic media, global image circulation, and art world practices, the artists in ‘Here and Elsewhere’ share a critical attitude toward images, a healthy skepticism toward simplified representations, and a commitment to questioning the role that images play in the fabrication of historical narratives," state the curators Natalie Bell and Massimiliano Gioni in the introduction.

There are cultural coincidences, certainly. That doesn't mean homogeneity. The curators challenge the meaning of evident recurrences by using war as a frame – Ala Younis’s curatorial piece is installed on the top floor, while the second floor (the first real exhibition floor) exclusively features works on the subject. The latter approach war mainly as a personal story, focusing on individual memories rather than on facts. Lamia Joreige notably videotaped testimonies from people recounting their experience of the war, sometimes in terms that nearly become abstractions: "I thought it was food cans exploding, and it was actually shooting," "I could barely follow the events of the day except for the shelling I'd hear," they describe. Each memory is triggered by an object, and the effect reaches a paroxysm when an interviewee shows a child’s naïve drawing, titled The Sky, that depicts a large plane above a bright orange fire devouring the skyline. Fouad Elkoury somehow makes use of the same process, choosing as activating objects his own photographs documenting the devastation of downtown Beirut.

The relevant curation unwinds a subtle thread to convey a strong sense of diversity, alternating similarities of practice, thematic coincidences, and correlations in methodology. Joreige’s and Elkoury’s series, on the second floor of the museum, are the first pieces to be seen after the introductory sculptures by Hassan Sharif, installed in the first floor lobby. There is seemingly no transition from Sharif's to Joreige's works, made of mundane objects and everyday materials. Sharif's consumerism piles question the making of art and the boring redundancy of mass-production in our over-industrialized society. In his ongoing series, initiated in the early ’80s when he started looking for an alternative to contemporary painting and sculpture, modest objects serve as metaphors. Though engaged in radically different aesthetic and political directions, Sharif’s and Joreige’s works share the same title (and primary material): Objects. Just like the word "Arab". "The social and political meanings of ‘Arab’ are plural and contradictory in different locales... ‘Arab’ resonates with the criminal in France, whereas it resonates with arrogant hegemony in Amazigh Maghreb, or with the defeated oppressor in Kurdish Iraq," Rasha Salti notes. Diversity characterizes the meaning of "Arab" as much as it defines the Arab art, the curators remind us with such a scenographic choice.

Following their disruptive curation, the exhibition continues with a vast array of variations on the theme of memory that respond to Elkoury's archival photographs – from historical memory, as in Simone Fattal’s sculptures referencing ancient Syrian history, to personal memory, as in Hrair Sarkissian’s work Execution Square, which depicts public squares where, regularly until recently, criminals were hung in Syria. As a teenager, Sarkissian witnessed by mistake such a traumatic scene and shot the squares empty and quiet, in an attempt to clear his memory of the haunting image. The floor features other cathartic works meant for the citizens, such as those by the Syrian documentary collective Abounaddara, Jordanian photojournalist Tanya Habjouqa, and Iraqi artist Jamal Penjewy. "In my village growing up we didn’t have electricity so when I was a child I brought all the old people to my house to tell stories about life and the beautiful things in life. That is where I got all the beautiful images in my mind and all of my art comes from that. Last night I dreamt about them and my childhood. I miss them," he writes.

Being art before being Arab, Arab art draws from self-expression. The third and fourth floors deploy the scope of this field for aesthetic experimentation and provocation, applied to commercial, documentary, or conceptual practices. The works here range from the famous provocative studio portraits by Van Leo and Hashem el Madani from the 1940s to 1970s, to Yto Barrada’s abstract approach to documentary forms and Ali Jabri’s collages. Jabri’s artistic practice was rooted in his sketchbooks and scrapbooks, filled with notes and musings, impressions from everyday life, excerpts from his readings, and discussions of history, archaeology, and architecture, which channel the ardor of both T.E. Lawrence and Jean Genet. Also exhibited are Anna Boghiguian’s paintings, which investigate mutual relations between image and sound – in the late 1960’s, she composed musical pieces based on the sounds of the city and translated them into paintings – and Marwan’s paintings, which bring together European modernity and ancient Oriental wisdom. These are the only few works in this large section that are not based on photography or video – a ratio that is also applicable to the entire exhibition, since, for the past 50 years, technological disciplines have been those most widely used to shape opinion. Presumably more faithful to the truth, they obviously haven't brought the end of Orientalism with them.

Featuring more than forty artists from over twelve countries in the Arab world. 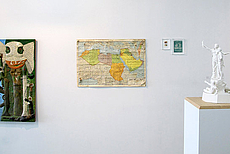 The impact of the Palestinian struggle on ideals, efforts, discourses across times and geographies, traced in artworks and documents of visual culture. 16 July - 28 Sept. 2014, New Museum, New York.