Review of the Biennial of Young Artists from Europe and the Mediterranean, 6 June - 7 July 2013, Mole Vanvitelliana, Ancona, Italy. 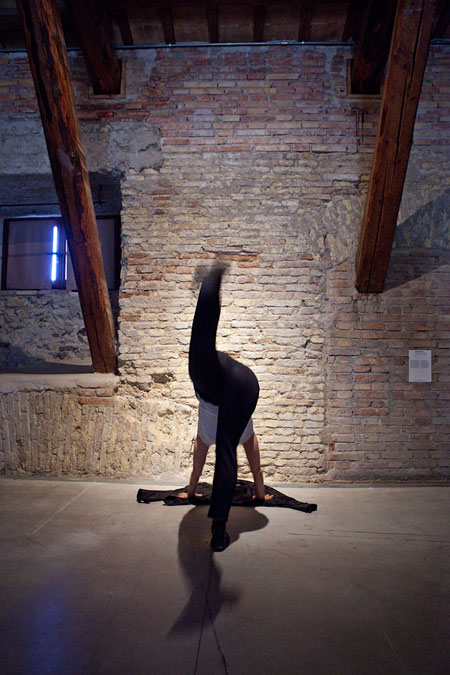 Blue-Eyed Alì
one of many sons of the sons,
will go down from Algiers,
on sailing and rowing boats.
Thousands of men
will be with him
with little bodies and eyes
of fathers' poor dogs
on boats launched in the Kingdoms of Hunger.

From this "Prophecy" by Pier Paolo Pasolini comes the title of the installation by Gian Maria Tosatti (* 1980 Rome, Italy), The Kingdoms of Hunger, one of more than 200 works on display at Mediterranea 16, the Biennial of Young Artists which takes place in the enchanting Mole Vanvitelliana in Ancona, on the 2400th anniversary of the city foundation.

Some teeth emerge from the concrete floor made by Tosatti, like in a sea. They are the only remains of existences that every day leave their countries in hope of a better life on the other side. To this empty surface corresponds Voice of the Invisibles by Charbel Samuel Aoun (* 1980 Beirut, Lebanon), an installation made of old phones in various models: each one spreads the recorded voice of people the artist met during his travels across Mediterranean, telling, in different languages, a painful moment of their lives.

By removing the vision, paradoxically, both artists make visible the stories of migrants, the words of outcasts, the routes of hungry people. In that way, they shape their own artistic experience not as a still image, but as a travelling space, a sketch of lines that intersect and entangle the maps of the classical visual representation.

This is the moving image of Mediterranean and, at the same time, of Mediterranea 16, whose vocation, since 1985, is to be itinerant and to favor the intersection of cultures facing this sea that unites but also divides.

This is what the performance of Virginia Zanetti (* 1981 Fiesole, Italy), Walking on the water, reminds us: a walk on the rock of "Trave" off the coast of Ancona, a particular geological formation issued from the encounter of two faults which extends for about a mile, in part emerging out of the water. Legend says that once the "Trave" extended to the other side of Adriatic sea, as a symbol of fraternity, but then the fury of elements destroyed it and gave it the aspect of a collapsed bridge. Zanetti investigates therefore the concepts of Miracle and Utopia as unreachable and unrealizable extremes, out of the rules of common logics; but she also allows to make direct experience of Mediterranean as a crossing and, simultaneously, as a barrier or a limit.

If you live on the wrong side and you don't get a visa, this could be an obstacle to freedom of movement and to artistic cooperation in this area of the world. That's what happened to the contemporary dance company Sareyyet Ramallah, active from 2005: it couldn't perform during the opening days because one of the dancers wasn't allowed to get out from his country. In this case too, paradoxically, the invisibility of the performance to the public sounds like a further denunciation against the effects of industrialization and colonialism on human beings and their surroundings. What the dancers are trying to do, through self-organization and self-knowledge, is to find a strategy in order to get out from this "Ordinary Madness" of present times by building a free performative situation in Palestine. A kingdom of art, out of the society's structures.

They who never wanted to know, they who had eyes only to beg,
they who lived like murderers underground, they who lived like bandits
under the sea, they who lived like crazy in the sky,
they who built
laws outside the law,
they who adapted themselves
to a world under the world.
Thus spoke Pasolini again in 1965 about migrants, thus could be defined today artists and curators of Mediterranea 16. By building a kingdom on the ruins, they restore the ancient meaning of Mediterranean: being a basin that embraces, a meeting point, a sea whose waters are really trans-boundary and not under jurisdiction of any State. Their work could be summarized by the gesture of Randa Maddah (* 1983 Majdal Shams, Syria): in her video Light Horizon, an actress meticulously tidies up the room of a ruined house in the village of Ain Fit in the Syrian Golan with the aim to creating a familiarity in the midst of tragedy and destruction.

This is also how the Mole Vanvitelliana looks like: a kingdom of art precisely, a free zone where everything is allowed, even errors, a "Tiers-Paysage", from one of the eleven sections' names inspired by Gilles Clément and by his concept that abandoned and uncultivated lands, free from mankind's exploitation and aside from power, guarantee most productive wealth and biological diversity.

Initially, the "Mole" was a lazaretto, designed by architect Luigi Vanvitelli in the 18th century on an artificial island in Ancona's port. If nowadays it is used for temporary exhibitions, its fortified architecture had different functions in the past: place of quarantine, warehouse, system of protection against waves and, during the world wars, military stronghold. Today it becomes almost the symbol of Biennial. Its being aside from the city center, isolated but simultaneously connected to the mainland by three bridges seems to express the principles that have guided the eight curators in choosing the works on display: from a position at the edge of institutions, those works try to build not only an esthetic experience but also a critical vision, an art which is not self-referential but tightly related to the present political, cultural and social questions and which finds exactly in the error a new way of transmission.

It therefore seems like an odd coincidence that, on the one hand, this Biennial is organized in Ancona during local government's resignation, then in a climate of suspension from laws and, on the other hand, that it occurs within a former lazaretto which also reminds us how much disease, opposing the idea of a perfect and healthy body prescribed by the society, is contrary to the rule. As Antonin Artaud said, the plague is a model for an art whose communication should be made by contagion, horizontal and transversal, and not by imposition from above. [3]

The documentary work Arabian Walls by self-taught artist Rana Jarbou (* 1982 Saudi Arabia) who runs through all Islamic world countries to photograph graffiti refers us to an important dimension of the Biennial: the research, the construction of self-knowledge outside traditional systems and through a more direct and dynamic access to information, and, finally, the communication of such knowledge through informal participative devices, as platforms for exchange and discussion. The example is Measuring permanent research program on inobjectivity, a survey on the relationship between man and space led by Simone Frangi, Alessandro di Pietro and Pietro Spoto and based on regular round tables where everybody can freely discuss and share its artistic practice, thus enriching it of new collective contributions.

All this reveals a profound criticism to classical ways of learning, to formatted regimes of knowledge: for this reason, self-education could represent a powerful form of resistance. A cry of protest, in fact, seems to rise from all the works presented at the Biennial and it is very palpable in the documentary videos by artists coming from Balkan area: for example, The Blockade by Igor Bezinovic (* 1983 Rijeka, Slovenia) on the occupation of the university in Zagreb in 2009 against the commercialization of education. In its exhibitions, public actions and open debates, the collective Mreža Solidarnosti, active from 2012 in Split, tries as well to consolidate broader public with powerless workers in troubled Croatian factories, breaking media censorship.

The interest has now shifted to making art, to action, to time and not to the finished work that actually seems to fade away. On a Sculpture, an installation made of video and printed media by Dustin Cauchi (* 1981 Malta) and Paolo Tognozzi (* 1990 Ponte dell'Olio, Italy), is an attempt to visualize the dialogue between them around the creation of an undetermined artwork that could, incidentally, never be accomplished. What is visible here is what would have been instead dispersed in the final artwork: process, experiments, rejects, errors.

Showing the invisible is also an act of protest. With his video Permanent Exhibition, Fabian Bechtle (*1980 Berlin, Germany) presents a guided tour in the abandoned and empty Museum of Contemporary Art in Belgrade. The curator makes visible through words what is invisible in the image and Bechtle produces, by removal once again, a condemnation of cultural policy in Serbia and a resistance against what is disappearing.

Going through Mediterranea 16, one gets the impression that a short-circuit in vision, a shift in one's view, continuously occurs. Kaskada TV is the title of the video by Bujar Sylejmani (* 1981 Prishtina, Kosovo) and, in Serbian-Croatian, it means precisely TV malfunctions resulting in warped and cropped images. The artist realizes his experimental film thanks to these errors, creating a documentary narration which is also very personal and irrational. Hertaforming by Ana Vuzdaric (* 1983 Zagreb, Croacia) tries to reconstruct lives of unknown women. It's a very poetic and ghostly installation consisting of X-ray prints where audience must do a further effort and reorganize its vision starting from the negative, from what is opposite or absent.

Up to the photographic series of Ahmed Kamel (* 1987 Cairo, Egypt), emblematically called Sight, showing people who have been injured during Egyptian uprising and partly or totally lost their eyes. This time sight is blind and looks straight at us, the audience, and we become then invisible. So, not only these young artists' works escape the standardization of the image, but finally the public of Mediterranea 16 too.

More than 200 artists selected through an international call by BJCEM with partners in Europe, Middle East and North Africa.