The 9th African Photography Biennial in Mali. Review, including photos of the event and works. 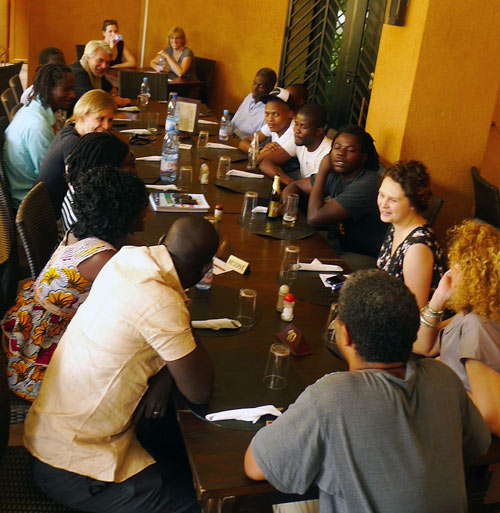 The 9th edition of the Bamako Encounters / African Photography Biennial is one of the most interesting biennials ongoing at this moment. The exhibitions are good, and the many artists / photographers exhibiting represent diverse positions. Although the biennial shuns a deeper reflection on the medium of photography itself, it definitely offers an international network to artists and photographers based in Africa.

The theme of this year’s biennial, For a sustainable world, could hardly be more directive. It puts urgent subject matters on the table: environmental problems in Africa, ranging from flooded residential areas to endangered peoples and depressed human conditions, from polluted cities and deltas to open-air dumps, refugee camps, ship wrecks and deserted buildings. But there is also room for less obvious topics. Environmental issues, in the end, can also function as a springboard for showing what actually needs to be sustained and taken care of, like the beautiful animals portrayed by Daniel Naudé or the paradisiacal photo essay by Lien Botha in which urbanism and nature meet. (One of her photos serves as the eye-catcher in the biennial’s publicity campaign.) The deeper one penetrates the exhibitions, the more versatile and diffuse the sustainability theme becomes. The biennial includes a section on Arab Spring with a profusion of ultra short video works from Egypt (compiled by artist Khaled Hafez) and Tunisia (by Faten Gaddes), as well as a tribute to the late Cameroonian artist and entrepreneur Goddy Leye, to name just a few side trips from the main path.

Unlike the contemporary photography in the Pan African Exhibition at the National Museum, which is treated quite conventionally in separated rows of prints, with here and there a short video on a flat screen monitor, the historical photography is mixed in with the permanent displays in the other two wings of the museum. The studio and street portraits by the Malian photographers Soungalo Malé, Abderramane Sakaly and the well-known Malick Sidibé from the '50s, '60s and '70s make a smashing appearance in the galleries of the traditional wooden sculptures, masks and other objects. The black-and-white prints manage to breathe life back in the objects taken away from the society that was once their natural habitat, while for their part the sculptures and masks on display in showcases add that necessary touch of spirituality to the realistic human portraits. It is an exhibition that will make many an ethnographic museum jealous.

The other wing is dedicated to an exhibition of the Sindika Dokolo collection. Stemming from the collection of the late Hans Bogatzke, a German, the collection changed hands to the Congolese Sindika Dokolo, who currently resides in Angola. Since then a large part of it has been dismantled and new acquisitions added, notably a significant share of the Revue Noire collection in 2008. Simon Njami, the main protagonist of Revue Noire, is an advisor to Dokolo, along with the artist/curator Fernando Alvim. Njami compiled the exhibition for Bamako. He focused on historical photography, ranging from remarkably informal studio portraits from the '30s by Mama Casset, up to Abderramane Sakaly, who tended to blend portrait with fashion photography, Jean Depara, whose work adds some nightlife glamour to that, Philippe Koudjina’s paparazzi shots of the jet set in Niamey, and Samual Fosso’s ego documents from the '70s. They are hung among the museum’s collection of textiles, an environment which has the quality of turning any of the black and white prints into stylish, vibrant fashion reportage. The smaller section of contemporary work is less fortunately hung in darkness. The announced video works are missing from this scene. It is a pity that the exhibition lacks any profound contextual information. The aim of the Sindika Dokolo foundation, said Njami, is to have works like these travelling over the continent, funded by the foundation itself. This aim of cultural charity to Africa should be enough to counter the criticism of the lack of transparency surrounding the Dokolo enterprise, but a sound educational environment such as a more insightful website than the current one, would surely help that process.

Presentations like this make a difference between an exhibition and an assembly of mere images, moving or still. As such, a few works stand out in the relative monotonous presentation of the Pan African section. For instance, Michael Tsegaye’s large format photographs show gravestones in Ethiopia that bear photo portraits of the deceased, whose portraits are - like the corpses underground - subject to deterioration. We become witnesses of this uncanny second death. The series Parrot Jungle by Lien Botha is also outstanding, as it evokes an urban diary with every single print unfolding another experience of nature in what obviously are urbanized environments.

But the smaller presentations elsewhere in the city add the spice to the biennial. For his solo exhibition From the Edge to the Core Nii Obodai travelled through his native land, Ghana, and photographed, among other things, sites that were of historical importance during the revolution years as well as an illegal galamsey mining village. The heyday of colonialism is thus related to a current excess of neo-liberalism. The series evokes a passage over land and through time. A poetic and historicizing patina is obtained by the use of old cameras, their specific qualities and the resulting, carefully printed and framed photographs in different tones of black and brown. The arrangement is a narrative by itself, regardless its subject matter, although the latter is present enough to catch attention. It is a photographic installation.

That is exactly what differentiates such a presentation from the ‘mere images’ at the Encounters, although their content too is often highly interesting. Take the photographs of the Agbobloshie Market in Accra, Ghana, by two artists in the biennial, Pieter Hugo (in the Pan African exhibition) and Nyaba Léon Ouedraogo (with a firm solo in one of the other venues). Their subject is neo-liberal excess too: an open-air dump of e-waste, where boys and young men reclaim the copper from computers ‘imported’ from the West by melting out the plastics in smoky fires. Some of the photos are identical, although Hugo is slightly more conceptually orientated in his strong focus on the portrait. But Ouedraogo captured the scene two years before him. The similarity is remarkable, and it would be instructive to compare the situation of Hugo, from South Africa, who is backed by Michael Stevenson Gallery and others, with that of the less-known photographer from Burkino Faso. But it would be even more instructive to compare their work with that of others who visited the same market and whose work, as seen on internet, looks exactly the same. So much for the originality of the photographic image.

The Bamako Encounters neither touches the issue of the incredible global flow, reproducibility and quick emulation and appropriation of the photographic image, nor the issue of distribution and publication of these images outside the realm of the exhibition format. As the Agbobloshie case proves, such images are not at all reserved for Africans only. But on the other hand, the biennial is probably one of the best incentives for Africans to get a firm grip on the continent's imagination via the global medium of photography. More than only exhibitions it organizes photography workshops in various African countries and through all kinds of means the biennial offers the participants the opportunities of an international network. The biennial is a form of distribution in itself, as parts of it travel to all kinds of venues in Europe. But surely none of those will beat the completeness of the Bamako experience itself.