The artist died of gunshot wounds inflicted by snipers on Tahrir Square in 2011. His art projects, teaching, and last days. 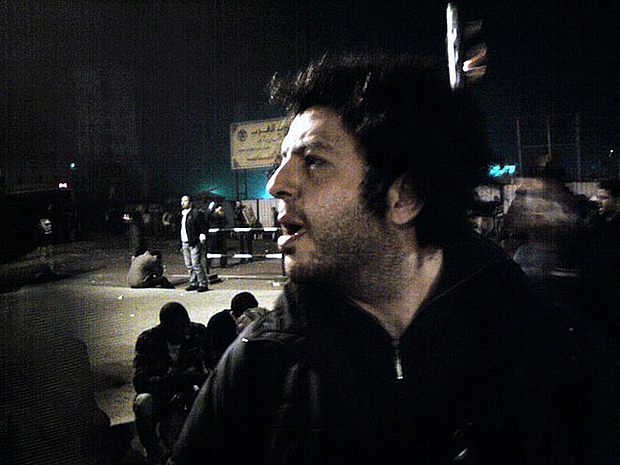 On January the 28th, Ahmed Basiony died of gunshot wounds inflicted by snipers from the Egyptian Police Forces on Tahrir Square during the start of the 25 January 2011 revolution. He leaves behind a wife and two children (6 and 1 years old).

January 26 at 10 pm
I have a lot of hope if we stay like this. Riot police beat me a lot. Nevertheless I will go down again tomorrow. If they want war, we want peace. I am just trying to regain some of my nation’s dignity.

January 27 at 12:09 am
It is necessary to be fully equipped while participating in the revolution: a bottle of vinegar to overcome the tear gas, protective masks and tissues to inhale vinegar, self-defense sprays, athletic shoes, Pradoral tablets, food and drinks… It is prohibited to use violence against security agents and to insult them. Vandalism is also forbidden for this is our country. Bring a camera with you and don’t be afraid or weak.

Ahmed Basiony graduated from the Faculty of Art Education at Helwan University in the year 2000, where he then worked as an assistant teacher in the department of drawing and painting. After acquiring his master’s degree in Creative Potential of Digital Sound Art, he was working on his PhD Thesis on The Visual Aspect of Open Source Programming in relation to the concepts of digital art.

He is considered one of the most important artists of the new generation of contemporary Egyptian artists. His practice varied greatly and evolved rapidly in the past 10 years. His early large-scale expressionistic paintings won him the first prize in painting in the 2001 Salon of Youth. Then his work took a turn in a more experimental direction involving new media and multimedia installations between the years 2001 and 2005.

Basiony focused his academic study on digital sound art during the preparation of his master’s thesis between the years 2002 and 2006. At the same time, he started organizing the independent experimental workshop for digital sound art at the faculty of Art Education at Helwan University in 2006, as one of the experimental workshops for media and creativity supervised by the artist Dr. Shady El Noshokaty. Basiony had already started participating in 2000, when he still was a student. 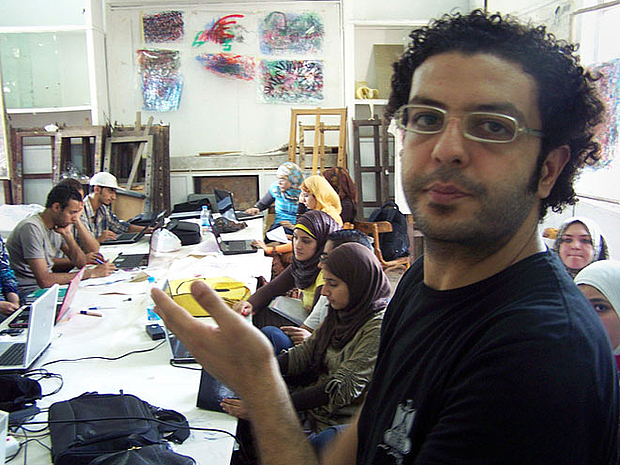 In his independent workshops, Basiony introduced the first academic program in sound art experimentation to Egypt. He created this program that gives the students a chance to acquire the creative skills that are important to perceive sound as a raw material in relation to imagination, as well as the methodology to merge the audible material with virtual images whose state and nature students can manipulate and change using digital audio equipment and software.

Basiony depended on the weight of his personal performance to attract a great number of students to this new medium in Egypt. He was a catalyst in the evolution of the concept of sound art in every new workshop that included live sound performance in the summer of 2009 and 2010. During those two workshops he taught the students the power of compound natural sounds and how to transform environmental ambient sound into abstract shapes and forms in the mind of the audience, which would acquire an almost architectural nature built up in direct live performance in front of a live audience utilizing all available technologies of live sound performances.

He paid close attention to the power of group learning, the importance of interaction and the merging of experiences as well as experimentation in the execution of ideas. Most of the ideas were a result of direct brainstorming evolving through group interaction into a sound piece that tickles the mind and senses when heard in a live performance studio. 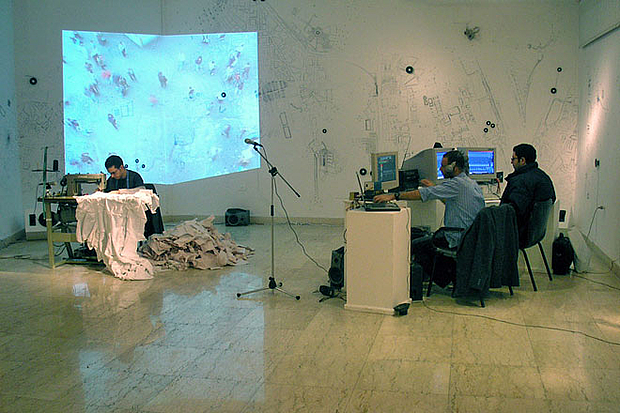 In parallel, Basiony's creative production resulted in a series of artworks that depended mainly on the language of interactive art; this appeared in his first joint project with fellow artist Magdi Mostafa, titled Madena in March 2007. This project won them the Grand Prize of the 13th Salon of Youth. The work was exhibited in the hall of Mahmoud Mokhtar Museum. The project included many levels of multimedia, starting from projections within an installation that were fuelled by an interactive live performance between the visitors and the artists throughout the duration of the exhibition. Madena is an audiovisual journey that transposes the real experience of being on Cairo's streets into a virtual realm inside the exhibition space. Each part of the real Cairo map is translated topographically onto the walls and through recorded environmental sounds coming from strategically placed speakers on the virtual map. The viewers are invited to interact in an audible dialogue with the artists. The dialogue is captured by microphones and processed digitally by the artists. In the centre of the room sits a live performer sewing bits and pieces of the city map, creating a new city. In general, the artwork is an experience that must be perceived through all the senses and reconstructed by the subjective experiences of the viewer.

In 2007, Basiony produced his first interactive digital media experiment in his independent project, which was part of Stammer an Interactive Experiment, a group project organized by Shady El Noshokaty for the exhibition Occidentalism, curated by Karim Francis. In this project, Basiony introduced an idea that depends on the visitors’ interaction with their own personal portraits as captured by a surveillance camera and projected onto hundreds of unlit light bulbs. As soon as the visitors enter the hall, they are able to control the amount of illumination of the light bulbs by means of the volume of their voice. If they speak at a high volume, the lamps illuminate brightly, thus overshadowing their image projected onto the same bulbs, fuelling a power struggle between the viewer and the system. The viewers have to choose either to remain silent and let their personal image appear or to produce any sound, making their image disappear in the great brightness of the lamps.

Basiony participated in an exhibition titled The Body Invisible Presents in December 2009 in the Mawlawiyah Palace with a conceptual performance titled Symmetrical System, in which he covered a large area of the ground stage with a liquid rubber material mixed with pigments to simulate human skin. Basiony appeared on stage wearing a blue overall, like what slaughterhouse workers wear, alongside a female performer wearing a dark Baroque-style dress with very intricate details. Basiony started to develop a surrealistic dialogue with the rubber surface. Sometimes the interaction was calculated precisely, at other times it became purely expressionistic as if his body were trying to recreate itself to become one with the surface, inspired by the architectural nature of the stage that was originally intended for ancient Sufi dancers. On the other hand, there was a tension in the relation with the female performer, who moved slowly like a puppet around him, trying carefully to invade his space. The work alluded to the nature of the contradictory relations between two different realms that might want to secretly unite to discover a common language through the virtual body.

Basiony grew more and more interested in the study of digital interactive media, thereby becoming one of the very few people working in this field in Egypt’s contemporary art scene. This is due to the lack of any academic programs that teach this specific field of art and to the vast amount of software and hardware knowledge that is required to practice interactive art.

He participated in the first Egyptian/Spanish interactive art workshop, then in the "Egypt Lab" workshops in cooperation with Medrar Contemporary Art Foundation in Egypt and the Hangar Foundation for technological production in Barcelona in 2008-2009. These workshops focused on multimedia interactivity through the use of open source programs like Pure Data and the integration of external hardware circuitry like the Arduino electronic platform. Open source programming is based on sharing experiences between different programmers to develop free-of-charge software in an attempt to counteract the influence of huge software production companies. These programs have immense flexibility in controlling and mixing different types of sensors and haptic and audiovisual equipment. 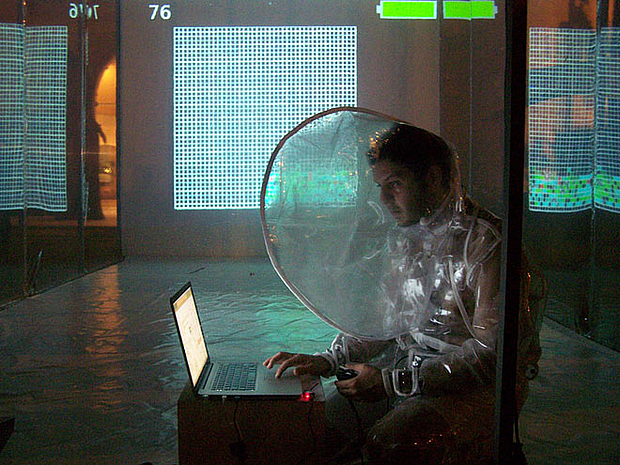 Basiony produced two of his major art projects using open source programming. The first was Thirty Days of Running in Place, which was presented in the exhibition Why Not in January 2010 in a specially constructed room outside the Palace of Arts in the garden of the Cairo Opera House. The room was enclosed in transparent plastic sheets. In it, Basiony performed daily for one hour wearing a plastic suit, designed especially for this project, that covered him completely with digital sensors to calculate the amount of sweat produced and the number of steps taken while he jogged around the room. The data was then transferred wirelessly to the computer that projected it onto a large screen with a graphic grid and geometrical coloured shapes that changed in accordance with the physiological changes in his body as he moved, creating an interactive relation between the living body and the digital system in an aesthetic manifestation of colour and shape.

Ahmed Basiony's last project was an interactive piece titled ASCII Doesn't Speak Arabic, exhibited at the Cairo Documenta in December 2010. This was a large independent art show organized by a group of young Egyptian artists for two weeks in one of the old hotels downtown. ASCII Doesn't Speak Arabic was also produced using open source programming to control the interactive process. The viewer's moving image was projected live in the form of ASCII code onto one screen, but this time in the Arabic alphabet; the system assigned Arabic letters to each viewer's head within the screen parameter. The viewer could then choose to push the letter assigned to him and project it onto the other screen by swinging his head to the side in a process that could include several viewers who had to synchronize their movements to compose coherent words or sentences onto the opposite screen. This project examined the relationship between body language and verbal communication. On the technical level, Basiony had to overcome the obstacle of ASCII applications, which are not compatible with the Arabic alphabet, with the help of one of the famous Spanish programmers who specialize in this field.

As a creative musician, Basiony was invited to participate in one of the most important festivals for digital music and sound art in Egypt, the Live 100, in May 2009 and 2010. Basiony's musical vocabulary varied from a minimalist approach to a conceptual one when he presented his work in cooperation with Egyptian folk singer Abou Asala, creating a hybrid type of music fuelled by the cultural contradiction between folk song and the digital minimalist music of the electronic age. Audiences and critics alike received this experiment well when it was performed at the Darb Foundation for Contemporary Art in 2010. It was also planned to perform it in June 2011 at Sónar in Barcelona, one of the most prestigious digital music festivals in the world. The radio station 100radiostation.com - Electronic music from Egypt, the Arab world and International - has dedicated this month's program completely to Ahmed Basiony's music, commemorating his death and acknowledging his unique talent.

No one would argue how uniquely talented an artist, a teacher, a musician, and a revolutionary Basiony was. His talent developed relentlessly in all directions. He was one of the most dedicated people to his gift and to his students. And on a personal level, he was one of the kindest, gentlest and endearing people I have ever known. You may not be with us in person today, but you will live in our hearts and minds forever. Rest in peace, our beloved brother. (S. El Noshokaty, 13 Feb. 2011)

Visual artist, Professor at the Faculty of Art Education, Hellwan University and American University in Cairo. For his thesis "Media Art and New Egyptian Identity", he was awarded a PhD in philosophy of art education in 2007.