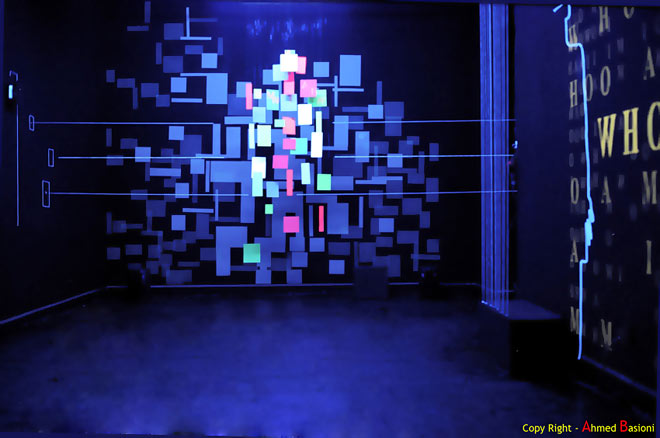 Ahmed Basiony is considered one of the most important artists of the new generation of contemporary Egyptian artists. His practice varied greatly and evolved rapidly in the past 10 years. His early large-scale expressionistic paintings won him the first prize in painting in the 2001 Salon of Youth. Then his work took a turn in a more experimental direction involving new media and multimedia installations between the years 2001 and 2005.

In parallel to his experimental soud art workshops, Basiony's creative production resulted in a series of artworks that depended mainly on the language of interactive art; this appeared in his first joint project with fellow artist Magdi Mostafa, titled Madena in March 2007. The project included many levels of multimedia, starting from projections within an installation that were fuelled by an interactive live performance between the visitors and the artists throughout the duration of the exhibition. Madena is an audiovisual journey that transposes the real experience of being on Cairo's streets into a virtual realm inside the exhibition space.

In 2007, Basiony produced his first interactive digital media experiment in his independent project, which was part of Stammer an Interactive Experiment, a group project organized by Shady El Noshokaty for the exhibition Occidentalism, curated by Karim Francis. In this project, Basiony introduced an idea that depends on the visitors’ interaction with their own personal portraits as captured by a surveillance camera and projected onto hundreds of unlit light bulbs.

Basiony participated in an exhibition titled The Body Invisible Presents in December 2009 in the Mawlawiyah Palace with a conceptual performance titled Symmetrical System, in which he covered a large area of the ground stage with a liquid rubber material mixed with pigments to simulate human skin. Basiony appeared on stage wearing a blue overall, like what slaughterhouse workers wear, alongside a female performer wearing a dark Baroque-style dress with very intricate details. There was a tension in the relation with the female performer, who moved slowly like a puppet around him, trying carefully to invade his space. The work alluded to the nature of the contradictory relations between two different realms that might want to secretly unite to discover a common language through the virtual body.

Basiony grew more and more interested in the study of digital interactive media, thereby becoming one of the very few people working in this field in Egypt’s contemporary art scene. This is due to the lack of any academic programs that teach this specific field of art and to the vast amount of software and hardware knowledge that is required to practice interactive art.

Basiony produced two of his major art projects using open source programming. The first was Thirty Days of Running in Place, which was presented in the exhibition Why Not in January 2010 in a specially constructed room outside the Palace of Arts in the garden of the Cairo Opera House. The room was enclosed in transparent plastic sheets. In it, Basiony performed daily for one hour wearing a plastic suit, designed especially for this project, that covered him completely with digital sensors to calculate the amount of sweat produced and the number of steps taken while he jogged around the room. The data was then transferred wirelessly to the computer that projected it onto a large screen with a graphic grid and geometrical coloured shapes that changed in accordance with the physiological changes in his body as he moved, creating an interactive relation between the living body and the digital system in an aesthetic manifestation of colour and shape.

Ahmed Basiony's last project was an interactive piece titled ASCII Doesn't Speak Arabic, exhibited at the Cairo Documenta in December 2010. ASCII Doesn't Speak Arabic was also produced using open source programming to control the interactive process. The viewer's moving image was projected live in the form of ASCII code onto one screen, but this time in the Arabic alphabet; the system assigned Arabic letters to each viewer's head within the screen parameter. The viewer could then choose to push the letter assigned to him and project it onto the other screen by swinging his head to the side in a process that could include several viewers who had to synchronize their movements to compose coherent words or sentences onto the opposite screen. This project examined the relationship between body language and verbal communication.