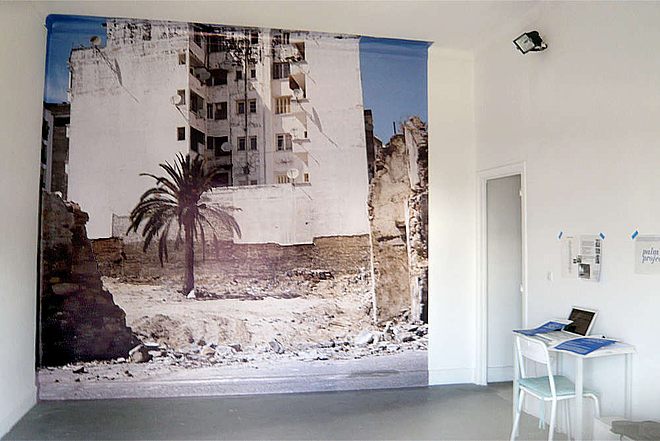 Yto Barrada's first exhibition at L'appartement 22 is "a modest proposal" in which the artist develops her vocabulary using photography, publications, film, and interventions in the urban and exhibition spaces. Cinema and graphics amplify the artist's activist approach that navigates between historical reality and ecological projection.

BEAU GESTE [BEAUTIFUL GESTURE]. This 16mm film depicts a commando group of three men – hired by the artist – in a vacant lot who attend to a wounded palm tree. It is a gesture through which the artist seeks to render its disappearance more difficult while nevertheless failing to prevent its removal by the lot’s developers.

The film begins with the artist’s voice-over – "Some 5000 building permits were issued in the city this year" – and later expresses hope that the tree will have a 50% chance of survival. It is an uncertainty that warns of fatality more than it offers a civic or ecologically conscious lesson. The spectator is hooked by the film’s plot with the image of people passing by who watch and comment on this "illegal" act taking place in broad daylight. It is cinema that acts on the real, and image validates gesture.

The second work in the exhibition is wallpaper spanning two walls, the floor, and the ceiling. The image is once again of a vacant lot with a palm tree at its centre, this time surrounded by visibly recent buildings. It is a trace of what was perhaps the garden of a villa, levelled to allow a new, multi-unit building to be erected in its place.

The figure of the vacant lot is an element that interests the artist, who engages the relationship between the urban and natural landscape: "A vacant lot only functions when it is inhabited. It is a space of play, abandon, or waiting. It is a space that only exists through that which is projected upon it. We are going to build something new there one day! But we wait during the period in which the construction is not finished, the time of projection." [1]

Vacant lots appear frequently in guerrilla gardening. Beyond form, vacant lot, or process, guerrilla gardening is also articulated in Yto's documentary work that addresses urban development in Tangiers, one of the cities most affected by building speculation in northern Morocco in the last decade. Yto reveals these spaces as being between ruin and becoming something else. The urban landscape emerges from these spaces that are hidden and veiled by temporary walls and signs bearing frozen images of a Dubai-ified dream. It is a country transforming itself not only socially and culturally, but also through its urban landscape.

The artist ascribes central importance to the peripheries, to the image of corners in her photographs. "What also interests me is the insubordinate gesture. It is the perspective of its action. We set ourselves in an interesting place between poetry and politics. It is this place in which I like to work. I give information, but I am not a journalist. I give poetic things, but I am not a poet either. My work exists at the periphery of these three. I like to inform, I like to inform myself." [2]

The exhibition’s third element is the publication of the Palm Project Manifesto. This fanzine was distributed first during a picnic as part of the 3rd Marrakech Biennale. The publication includes a poster listing a hundred varieties of the best known palm trees, the same image of the vacant lot, and the film’s technical rider. At its centre is a pink, typewritten "modest proposal" in Arabic and English authored by a certain Yahya Sari’. Yto commissioned a text with the same ironic tone as that of Jonathan Swift, given a new content here by the imaginary Yahya Sari’ as "A Modest Proposal to Modernize Morocco and Maximize its Resources and Efficiency." [3]

Even in a context in which taboos and certain conventions prohibit us from speaking about realities, the artist formulates fictions that speak to them and creates a new language. The appearance of plants reveals issues of urban development. Through the figure of the palm tree, the artist denounces the standardization of landscapes and cities whose streets are lined with the same trees and paved with the same marble and granite. The Rif’s iris disappeared in the city at the same time as the mountain inhabitants arrived in the urban periphery. [4]

There is a political dimension and a pedagogical engagement in these works that reflect the exhibition’s urban location [5] where one hears the daily cries of protesters. An artist who lives in society is forcibly confronted with its structures and delusions. The political is very present in this exhibition. It is an approach almost imposed by where one lives! In a context in which artistic creation is perceived as dangerous to power, now more than ever it is time to call for the engaged vision of artists – fine artists, dancers, filmmakers, weavers, bricoleurs – and their participation in constructing a society that is ecological and generous. Disobedient, Yto Barrada’s work proposes a possible diversity through the figure of the palm tree, the iris, and the vacant lot. A gesture or a proposition, no matter how modest, participates in an ecology of this world in transition.

Independent curator and art critic. Founder/director of L'appartement 22 in Rabat, Morocco. Lives there and in Paris, France.