Not Easy to Save the World in 90 Days 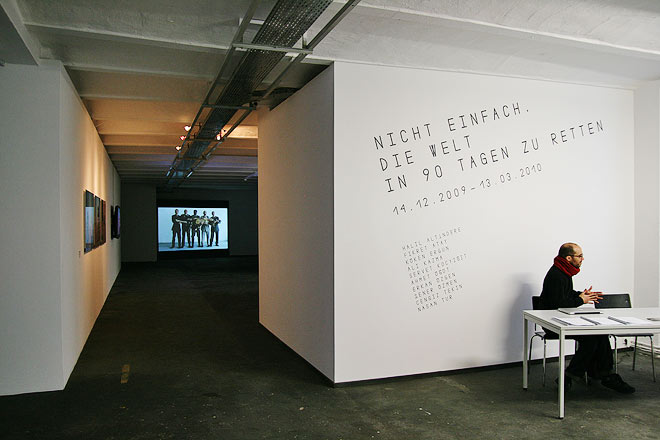 When this exhibition in "Tanas", the Berlin project space for Turkish art, ends in March 2010 after 90 days, the world will certainly not have been saved. Nor can that be expected at the next station, the art association on the Danish Baltic Sea island Møn. But as René Block suggests, of course ironically, with the title of his catalog text, "…but one could attempt it…"

A year and a half after the opening of "Tanas", this is the first exhibition for which the director himself takes conceptual responsibility. In conversation, René Block said that the preceding program was under his aegis as well, of course, but because of his close collaboration with the artists, he didn’t want to call himself the curator of such solo exhibitions.

This current project is something different, he says, because it is based on a broader curatorial concept that was long under development. Block had two primary interlocked intentions. First, he wanted to draw more attention to the fact that Turkey’s contemporary art scene extends beyond Istanbul and that interesting artistic positions can be found on the other side of the Bosporus. Most of the artists comprised in the exhibition are of Kurdish descent and come from southeastern Turkey. Four of them live in the city of Diyarbakir and in nearby Batman. Among the participants from Istanbul, Halil Altındere is an important link between that city’s art scene and his friends in his southeastern Anatolian homeland.

René Block said his second and surely more important intention was to present a younger, critical generation of artists. He wrote on what unites them: "All of these artists share a clear aesthetic language since after all, their work involves a critical reappraisal of conflicts and prejudices, opposition to authoritarian structures, or the unmasking and breaking of cultural and political taboos that still exist in Turkey. Another commonality among the artists is that they advance their critique subtly through the icy bite of irony, through exaggeration to the point of absurdity, or simply through the poetic feel of allegory." (Booklet text)

In a photo tour through the exhibition with aids to understanding the background of individual work, we show what the curator means.

>> Photo tour
24 pages of pictures, in part with commentary

On the Tanas project space and René Block's almost 20-year close relationship to the art of Turkey, see the interview by Sabine Vogel in the Nafas Art Magazine of August 2008.
>> Interview with René Block