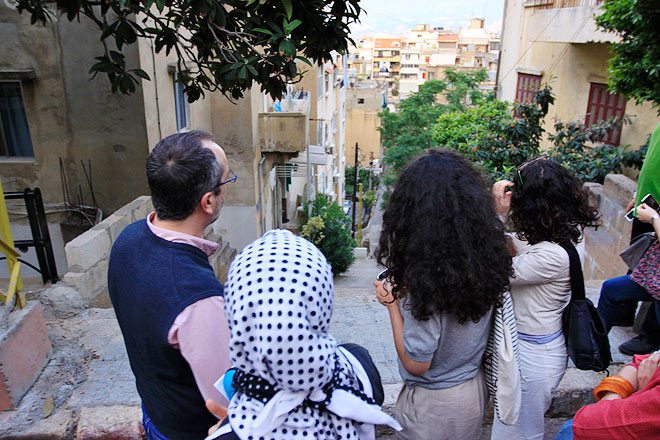 During the preparations leading up to Home Works 5, the general attitude in Beirut – nearly uncanny in its matter-of-factness – was best exemplified by one question: will it again be necessary to delay this year’s Forum due to a political conflict, as was the case by each and every edition thus far? Again and again in the preceding months, moments presented themselves in which reciprocal provocations between Lebanon and Israel could have escalated. Again, the "neighbor to the South" sent its fighter jets circling over the city. Yet, the situation remained tautly slack and Home Works 5, the forum on cultural practices organized by Ashkal Alwan, could go ahead and take place as planned.

This year’s program was arranged around five broadly-composed thematic fields, spanning education, sound, and the 60s all the way to Saadiyat Island and militarism. The exhibitions, lectures, performances, panel discussions, artist talks, concerts and screenings scheduled to take place at various locations around the city for ten days were intended to relate to these very themes. Considering the fact that Home Works had managed without any programmatic focus up till now, the Forum appeared this time around noticeably overstretched. As always, Christine Tohme, the Director of Ashkal Alwan, had striven to ensure that Home Works not become yet another spectacle in the calendar of global art events. This effort notwithstanding, Home Works in the meantime seems to have outgrown its earlier character as an introspective "family reunion" of sorts, homey atmosphere and all. Not only has the Forum gained regional significance and influence, it has concomitantly extended its radius internationally outwards. Indeed, this year saw an increase in artists invited whose roots did not lie in the region. Such an opening was unavoidable. However, what could have had the potential to bring with it new impulses instead turned into a watering-down of the actual substance.

Home Works 5’s ambitious programming left some of the thematic focal points in the dark as unrealized, inert matter. A simple concentration on one or two of the proposed themes would have been enough to span the entire frame of possible contributions. Over the course of the Forum it was quite obvious that in any case the focus lay on the question of education, exemplified by this year’s motto: "Beirut Our Campus". In place of a productive exchange amongst specialists and those interested, it seemed more like everyone was being held after school, a sort of collective detention.

There were also stimulating moments, such as the theater piece Photo-Romance by Lina Saneh and Rabih Mroué as well as Tony Chakar’s and Ashkan Sepahvand’s tours. Another highlight was the colloquium moderated by the collective Pad.ma (Public Access Digital Media Archive). Here, the results of a workshop preceding the Forum were presented by each of the participating artists and researchers, all of whom had adopted the format of an online archive as a tool for their diverse working methods.

Photo-Romance tells a love story through black and white photographs projected onto a canvas screen situated center-stage, these acting as an accompaniment to a sketch-like dialogue between Rabih Mroué and Lina Saneh. The play is based on Ettore Scola’s 1977 film A Special Day, in which a young woman and her neighbor come closer – all the while the entire neighborhood has stormed the streets of Rome to celebrate Hitler’s state visit. Saneh and Mroué have transferred the scenario, along with plenty of self-irony, onto the events in Beirut in the spring of 2005, when after the fatal attack on the late Prime Minister Rafik Al Hariri hundreds of thousands of people gathered in the city center to demonstrate against the Syrian Occupation.

Tony Chakar uncovered multiple layers in the urban historical development of Beirut during his walking tours, weaving together subjective memories and historical facts to compose a psychogeographical mind-map of the city.

Similarly engaging with the relationship between memory and history as well as how both enter representation, the Iranian-American author Ashkan Sepahvand led a series of tours in the National Museum of Beirut under the title Other than someone, there was no one. Supported by a professional museum guide and a local theater group, Sepahvand developed a narrative thread throughout the museum in which a selection of exhibited objects acted as departure points for individual associations, moving beyond their standard perception as objective witnesses to a past reality. Such a mixing of fact and fiction not only made the construction of history evident, rather it allowed for dynamic discussions spanning a range of topics to open up – on, for example, how a nation identifies itself vis-à-vis its cultural heritage.

If the original intention behind the three panel discussions on the theme of education was to discuss possible unconventional teaching methods and thereby offer a set of perspectives for the Ashkal Alwan Academy slated to open in the autumn of this year, the theme’s urgency was unfortunately mired down by the complacency of its protagonists. Ranting was accompanied by cliché. It remains to be seen, however, what form the Academy will take on in the end. There is no doubt that Ashkal Alwan will face many hurdles along the road. State supervision and censorship offers its own challenge; yet, the dependence on NGOs for operational costs is another obstacle. On the one hand, this puts Ashkal Alwan and other, local not-for-profit institutions in competition with one another; at the same time, such NGOs have their own agendas, designating a set of canonical, "region-specific" themes as relevant.

Moderated by Walid Raad, the panel discussion on Saadiyat Island’s Cultural District, currently under construction in Abu Dhabi, further clarified the adverse circumstances the region faces. According to Raad, the District – designed by a slew of star architects and stockpiled with internationally established and market-friendly art – does not represent yet another mere tourist attraction. Indeed, Abu Dhabi is planning an infrastructure that will involve universities, magazines, art prizes, Western as well as regional collections of modern and contemporary art, galleries, critics, archives and libraries. Instead of speculating on the Sheikhs’ motives for such an undertaking, it seems as it were more productive to read present and future developments in between the lines set by the facts at hand. Despite such efforts towards more rigorous content, one felt during the panel that the discussion failed to go beyond a general critique of the Emirati leadership’s megalomania, philistinism and profit-mindedness. In the end the panel succeeded to point out the clash between an intellectual willingness for discourse and a neo-colonial Disneyland mentality, as the author and news reporter Mishaal Gergawi from the United Arab Emirates duly underscored in his brazen aside: "I can call Christine and ask her to do Home Works in Dubai or Abu Dhabi. Of course, she’ll refuse. But then I can find someone else who’s left Ashkal Alwan and we’ll do something close. We’ll call it, I don’t know, House Works, instead of Home Works."

The Lebanese Association for Plastic Arts, founded by Christine Tohmé in 1994 in Beirut.
Nafas