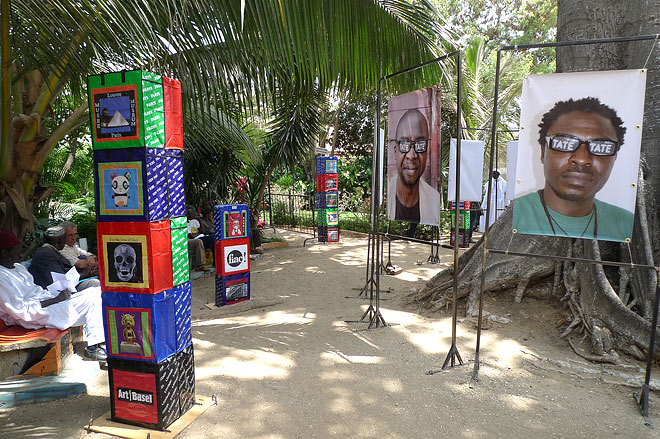 One wonders whether the decision to divide the 9th edition of the Dak'Art Biennial into an "international exhibition" and a retrospective was fortunate. The retrospective featured recent works of artists who had won the Grand Prix Leopold Sedar Senghor in previous biennial editions, such as Mounir Fatmi (2006), Viyé Diba (1998) and also the late Moustapha Dimé, who in 1992 was the first to win this prize, valued around 7,500 Euros. It was good to see the works of those who are considered the best of Dak'Art in an attractive multi-disciplinary presentation, but the consequence of this division was a relatively small international exhibition featuring only 27 artists. Moreover, the jury committee in charge of the selection decided to focus exclusively on those who hadn't shown before in Dak'Art, using the open call to artists of African descent as their main beacon (the open call is typical for this biennial). Though such a procedure could have turned the show into a fresh signal, all the criteria adopted in the selection process were negative in nature: no documentary photography, no (abstract) art works that needed written explanation, no design or sculpture that exploited "recycling" [1]. And so the hope for an adventurous exhibition was gradually rationalized away during the jury’s deliberations. There was no particular focus on any artistic issue whatsoever, no curatorial spark, making the international show look like a bad art fair rather than the thrilling event one would expect, pressing its mark of ignorance on the biennial as a whole.

A few projects are nevertheless worth closer consideration. This year's winner of the Senghor Award is Moridja Kitenge Banza, a Congolese artist living in Nantes, France. He presents an installation that, among others, features the not so original idea of a united African currency as well as a romantic take on slave vessels. Most memorable though is his video projection Hymne à Nous (Hymn to us). It shows the artist himself, naked and in plurality, his manifold figure arranged like a choir, singing a French paraphrase of the anthems of Congo and Belgium based on Beethoven's Ode an die Freude, the European anthem. It kind of happily connected slave history, Giorgio Agamben's concept of Homo Sacer and the spirit of revolution into a very catchy piece of art. One of the rare photographic contributions to the show came from Hasan and Husain Essop, a pair of twins from Cape Town. They describe themselves as fundamentalist Muslims and explore the meaning of this statement through their work: a series of staged photographs showing the artists practicing their religious rituals at surprising locations in and around their South African hometown. Also, one documentary photographic project made its way to the exhibition, by Patrick Gaël Wokmeni, who portrayed Cameroonian rappers in the rough urban environments of Douala.

Though the recycling of objects was banned from the main show, it is ubiquitous elsewhere, especially in the no less than 130 Dak’Art OFF projects. The third part of the official biennial programme is an exhibition of Haitian artists that partly responds to the recent devastating earthquake with a large, immersive media installation by Mario Benjamin and Maksaens Denis – again, quite experimental if compared to the international exhibition. More intriguing perhaps are the modest sculptures by Jean Hérard Céleur which combine wood-carved figurines with scrap metal. Recycled objects are also to be found in a small but elegant off-site show at Avenue Hasan compiled by the National Gallery of Nigeria. Here Kainebi Osahenye presents Casualties, a large wall of empty cans that extends into the exhibition room itself. It might be accused of using the obsolete academic principles of informal art but on the other hand, it is an impressive feature in the exhibition that also includes James Uche Iroha's documentary photographs of water carriers in the city of extremes, Lagos. Mounir Fatmi's contribution to the biennial's retrospective show can also be accused of recycling: in the video Beautiful Language of 2010 he sampled scenes from Truffaut's Wild Child (1970) in a staccato edit, adding disruptive electronic sounds and Arabic titles without translation. He thus transposed the topic of the film – the child found in the wild in late 18th century France – as well as Truffaut's emphasis on portraying moments of mutual communication and misunderstandings to the worrisome "clash of civilizations" thinking of today. These are only three examples of completely different forms of object recycling among many others to be found in Dakar. Researching them might serve any curatorial enterprise perhaps better than refusing categorically the readymade aesthetics, as did the jury in the international exhibition.

But what's perhaps more surprising is the way art is advertising its "Africanism" in this biennial. In the main show, and elsewhere, many works of art carry references to slavery, migration issues and violence, which fit perfectly with Western media stereotypes whenever Africa is subject of interest. In a lecture that was part of the biennial's program Salah Hassan accused Western museums of profiling Islamic Art one-sidedly by focusing on "good Islam" or how the West would like Islam to be. But the more radical art, the one that digs into "bad Islam", is often excluded from these shows. One might say the same of this African art biennial: it indulges on generalities and stereotypes of Africa. It makes one wonder whether there aren't more specific stories to deal with, local stories for example, either modern or ancient. There's a lot to tell the world about Africa that is less common but surely much more interesting than the typical clichés. It is no coincidence that documentary photography from Africa is currently quite successful because it shows the versatility of life on the continent. Could art then perhaps open up to a more versatile historical consciousness? Could an open call to artists try to move the submissions on that direction? No matter what came out of it, it would at least offer a topic to this biennial.

Dak'Art is rooted in the Pan-African aspirations of Senegal’s first president Leopold Senghor and his comrades; and Pan-Africanism – no matter how dead its utopianism – is still a strong factor in the populist politics of the current president, Abdoulaye Wade. He is himself the sole creator of African Renaissance, a monument of totalitarian proportions recently erected on Dakar's west coast, the bad taste of which might decide upon the biennial's future, if one takes into account that the organization of this event is primarily in the hands of the State. For strategic reasons, the choice of this year's biennial is to look back: budgets are cut down and one might fear for its future. The necessity of introspection has transpired through almost all the essays in the accompanying biennial catalogue. But when we look back at this year's edition we truly fear for its future, unless it finally decides on a curatorial artistic ambition that aspires to a next level of thinking about African art.