With its expressive minimalism, the group opens up a promising direction for the arts in Morocco. 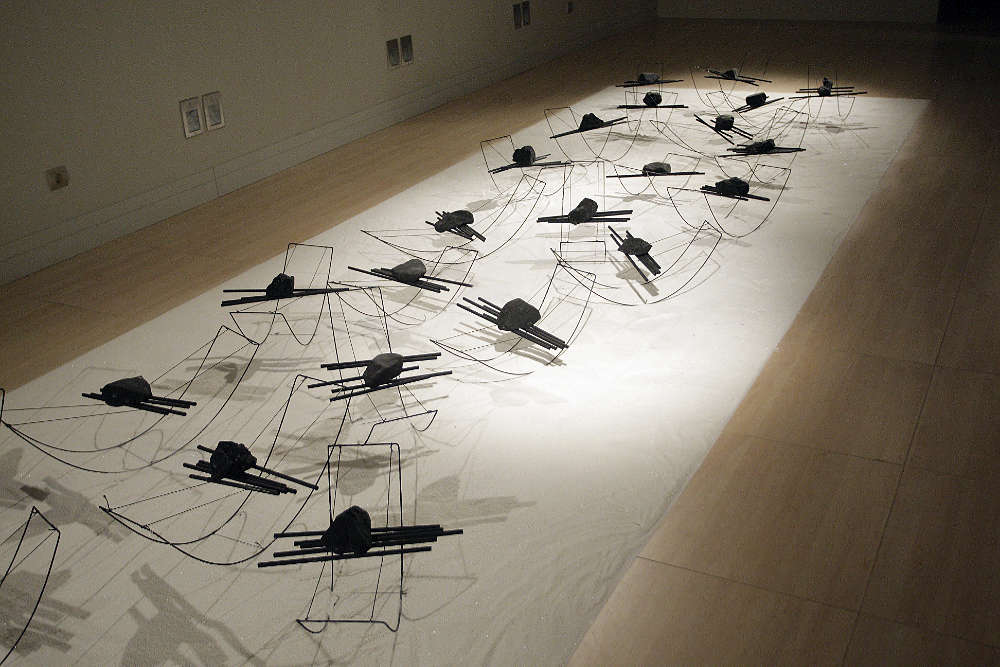 Two main currents can be observed in contemporary Moroccan art: one is born out of continuity, with traditional art as its starting point, while the other, clearly innovative, seeks its expression in the radicalism of a personal creative adventure

The exhibition of Collectif 212 in the Casa Árabe de Madrid (Arabic House) did not aim to provide a comprehensive overview of the art of Morocco, a country with an extremely complex history. This decision was based on personal engagement and complicity. I left it up to my memory to select the pictures. Of course, mine is a Western-molded memory, but I strove to forget the mirroring of a Europe that is blinded by the holy hallucination that ubiquitously dominates its art trapped in narcissism. It is a gaze also contaminated by the present-day acceleration of communication and by a haughty ethnocentrism. I’m sure I will find agreement that a visual vocabulary is developing in Morocco that is directly tied to the production of the youngest generation of Western artists and that gives the impression that there is already fundamentally a single visual language all over the world. The paths of communication between the continents have shortened in unprecedented manner, and interdependence continues to increase. Western art is opening itself to the refreshing external impulses because the works coming from elsewhere have a very special attraction.

Collectif 212 contributes identity and personality to the art of our day. The names of the members of the group are appearing more and more frequently in the international art scene, because their works are being included in major exhibitions and biennials. In this group, which can serve others as a model and reference point, all benefit from this fruitful connection. Viewing the works of the individual artists, one notes that the latest forms of expression cannot be attributed equally and in every case to all, and that mutual influences are not always obvious. Although no particularly tendency predominates in the group, there are correlations that can in no way be regarded solely as generational coincidences. The group members all exhibit, among other things, the “expressive minimalism” described by Bernard Collet. They developed it when forming their critical consciousness and have expressed it in various statements. Collectif 212 is open for all artistic manifestations. One of its aims is to join forces to bring Moroccan art out of a period of limitations and mediocrity primarily caused by a pessimism resulting from the social, political, and economic situation. These are representatives of a new generation of Moroccan artists who are advancing, questioning, and entering into dialog with their culture. When viewing their works, one is immediately struck by those created with contrasting media, techniques, and forms of expression and tied to the ability to convey a kind of energy that is connected directly with life today and projected into the future: the artistic creation of a special, unique form of life that places itself in relation to other individual ways of living – that of the viewer – as well as to what one regards as collective and social life.

Beyond the members’ artistic ambition, Collectif 212 wants to be a movement with ethical anchoring and activity oriented toward shaking up creativity in Morocco, activity that takes new and promising directions. The artistic rank of the participants passes every test; and even more important is that these artists are co-actors on the highest level in a process of change in Morocco. One of their most important messages is that an artistic renewal is always possible when it takes place as the collective effort of those who are ready to share their experience and set off in new directions.

(Article published in cooperation with Casa Árabe de Madrid. English translation by Mitch Cohen based on the edited German translation from the Spanish by Haupt & Binder)