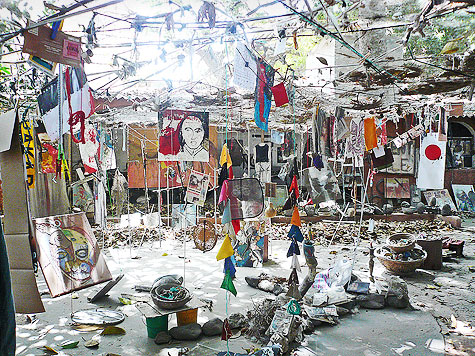 But for us observers from the undercooled West, the longing for magical Africa is first fulfilled in a hidden interior courtyard, off the official biennial maps. Behind an old iron gate in a side street, a bizarre Gesamtkunstwerk opens itself up. Under the high roof of a huge rubber tree hangs a web of strings studded with slips of paper and signs, expressionistic-abstract paintings and worn-out pieces of clothing, all held in place by clothespins. ... For decades, the artist Issab Samb, alias Joe Ouakam, has created a universe in which the signs of everyday life are transformed into altars of a private obsession.

In the 1960s, Ouakam, along with filmmaker Mambeti and others, belonged to the founders of the group Laboratoire AGIT-Art. Their multi-media actions were directed against the formalism of the Ecolé de Dakar; out of the "socialization of the aesthetic" developed an aesthetic of the social. This installation could function as a didactic piece for present-day artists – all that’s missing is a sign reading "National Museum" on the gate.