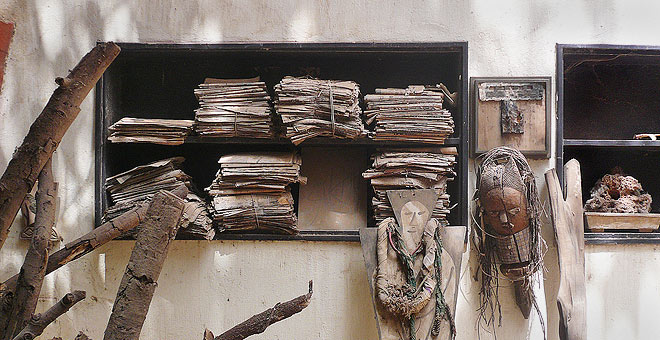 The state gives high priority to art. No longer to the degree it did under the first President of freshly decolonized Senegal, but still demonstratively. In his day, Leopold Sédar Senghor, the Paris-educated intellectual, poet, and philosopher of "negritude", had devoted 25 percent of the government budget to promoting culture. It is no longer possible to speak of such economic priority, but current President Abdoulaye Wade did not pass up the opportunity to personally open what is now the 8th "Dak’Art" biennial.

For the ceremony in the garden of the National Museum on the Place de Soweto, the red carpet is rolled out and a huge sheet of plastic shades the rows of chairs for the guests of honor. With flashing sabers, gold-braided cloche hats, and long red tunics, the operetta guard provides historicizing glamour and pomp. A handful of security personnel with loosely shouldered machine pistols are discretely strewn around the sandstone-colored balustrades. Schoolchildren, eyes wide with expectation, line the gravel path; chic young women in wildly ornamented robes usher the uninvited guests to their seats. The protocol of a presidential appearance is seldom so casually handled.

Artists, curators, Africa groupies, and critics from the international biennial circus stand at the margins and, before the highest "protecteur of the arts" appears with his entourage to the jingling sound of cymbals, use the time to socialize. That’s what’s most important, anyway. In the environs of these recurrent major exhibitions, the primary interest is in weaving, renewing, and maintaining networks. And because Dakar, like Venice, is sunny, cheerful, and at the ocean, the Afrophile art scene congregates every two years in Senegal’s capital as at a family gathering. If the art is sometimes not top-ranking, it’s easy to be philosophical about it in this friendly ambience of (for Europeans) reasonably-priced five-star hotels and "sister taxis" subsidized with women’s credit from the Ministry of Families.

While the President is still greeting the Francophone ambassadors, notables, and sponsors, a dozen guests of the Goethe Institute confer on the new strategies, ideas, and necessities of fostering culture in Africa. The Goethe Institute has an additional five million euros for Africa projects this year. But the dominant topic is the new emergence of African art collectors. The loaded Angolan-Congolese businessman Sindika Dokolo, for example, whose collection of contemporary African art already represented Africa at the last Venice Biennial, purchased and fostered African art and artists with the sum of about three million euros last year alone. This is a pure blessing for the African artists, but Western critics and museum people problematize it as the threat of the privatization and monopolization of art. For unfortunately, in far too many African countries, art and culture are not top state priorities at all, and national museums and publicly accessible archives are not a matter of course.

This year’s "Dak’Art", by contrast, suffers under the thumb of state care and functionaries. The energetic mood of new beginnings of past years’ "bush biennials" has made way for a passionless drabness, an arts-and-craftsy, smooth-polished paralysis. This although almost all of the few artists whose applications prevailed with the selection committee from the Culture Ministry focus on urgent political problems. With a tableau of padlocks and newspaper clippings, Babacar Niang (Senegal) illustrates the massive dimensions of illegal emigration. A playful video clip by Soly Cissé has the stars of the European Union flag dance the rondo of exclusions from "Fortress Europe" to the sound of computer-game squeaks. Three oversized suffering figures à la Käthe Kollwitz made of wood blackened by fire (Jems Robert Koko Bi from Ivory Coast) stand for "Darfur". Headless female figurines with pregnant swollen bellies made of rusty spoons, forks, and cartridge cases (Freddy Tsimba from Congo) symbolize the hopeless migrations of refugees. And an expansive arrangement of scraggily iron trees with begging branch hands (Ndary Lo) protests the dying of forests.

The social-critical kitsch is as one-dimensional as it is ambitious and well-meant. The Senegalese Ndary Lo won the biennial’s first prize – together with Mansour Ciss. The latter Senegalese, who lives in Berlin since a long time, won over the jurors with his "Laboratoire de Deberlinisation": the Brandenburg Gate and the outline of the map of Africa are pictured on two oversized matchbooks. In front of them are burnt and not yet ignited matches. The "de-Berlinization" alludes to the Africa Conference held in 1884 in Berlin, where the European colonial powers divided Africa up among themselves; the fire seems to stand for the ambivalence between destruction and liberation. For the artist in Berliner exile, his homeland’s prize is also a recognition of his lived multi-culturality. And since two homelands are meanwhile no longer enough, he also received a 3-month stipend in China.

But for us observers from the undercooled West, the longing for magical Africa is first fulfilled in a hidden interior courtyard, off the official biennial maps. Behind an old iron gate in a side street, a bizarre Gesamtkunstwerk opens itself up. Under the high roof of a huge rubber tree hangs a web of strings studded with slips of paper and signs, expressionistic-abstract paintings and worn-out pieces of clothing, all held in place by clothespins. In the corners and niches, neglected wooden sculptures, animal skeletons, and faded canvases play hide-and-go-seek with the rays of sunlight. Cognac glasses filled with dust on a garden table and the iron chairs in a backyard circle await visitors from the past. For decades, the artist Issab Samb, alias Joe Ouakam, has created a universe in which the signs of everyday life are transformed into altars of a private obsession.

In the 1960s, Ouakam, along with filmmaker Mambeti and others, belonged to the founders of the group Laboratoire AGIT-Art. Their multi-media actions were directed against the formalism of the Ecolé de Dakar; out of the "socialization of the aesthetic" developed an aesthetic of the social. This installation could function as a didactic piece for present-day artists – all that’s missing is a sign reading "National Museum" on the gate.