Makan - The House of Expression

The multiple activities of the alternative art center in the context of the art scene in Amman, Jordan. 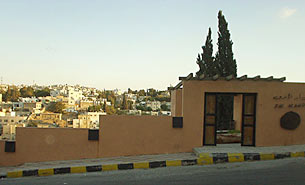 In Arabic, the word "makan" means place. The word is basic, broad, and rather general, but it insinuates something spacious, open, and free of conditions. This is what Makan - The House of Expression strives to be. It occupies the top floor of a two-story building a few steps below street level, and were it not for its new orange sign at the entrance, one might have difficulty finding it. No sooner you go down the steps and enter the space, you find yourself welcomed into a casual set up sometimes flooded with music, sometimes crowded with people attending a workshop or opening, and sometimes quiet and relaxed when groups of artists are just enjoying the sun on the balcony.

It was founded by Ola Khalidi in the spring of 2003. During her working years, after completing her master's studies in management at the University of Surrey in England, she had been active in the cultural scene. She worked with the Beirut DC, a film institution in Beirut, Lebanon, and was also involved with establishing "Blue Fig," a cultural café in Amman. As she says: "I felt the need to get more in touch with the artists themselves, and to play an active role in Amman’s developing cultural scene, which is young and has great potential. Slowly but surely I envisioned Makan; it was created from the dream I had of such a place."

"Art in Jordan is making huge leaps in techniques and styles. The artists are venturing deeper into the use of new mediums, incorporating various technologies in their artistic expression, and also tackling new topics, which address society, politics, sexuality, and other themes," continues Khalidi. Art in Jordan is still very much influenced by the overriding conservative approach towards all aspects of society. However, along with the many dramatic changes that the urban society is experiencing on all levels, art-making and art appreciation are changing as well. Today one finds here an increasing number of national and private art institutions for showcasing art. The local foreign bodies (such as the French, Spanish, and German cultural centers, or the British Council, for example) play a major role in introducing international artists to Jordan. At the same time, through their extensive traveling Jordan’s artists and cultural managers win more exposure and knowledge to sharpen their role in the local art scene with. Now audiences are more aware of different art forms - and more receptive to them. The number of people attending film festivals, concerts, exhibitions, and theater productions is steadily increasing.

In this context, Makan - or The House of Expression, as Ola Khalidi prefers to call it - not only provides a space for showcasing contemporary art in various forms, it offers an atmosphere for networking and support, as well as the chance to exchange ideas and to brainstorm, so that art projects can materialize.

Makan is situated in an apartment referred to architecturally as a "three-bay house," a typical structure of this region. The central room is the public space, used as the main hall for exhibitions, films screenings, and concerts. Via its doors, this room opens out onto other functional spaces: an office, an artist’s workroom on one side, a multipurpose room, a bathroom (which doesn’t escape being used as an exhibition space), and a kitchen, which, when necessary, converts into a photography lab on the other side. Makan also makes two of these spaces - referred to as "Artists' Incubators" - available as studio and/or working spaces. For example, the artist-musician Ala’ Diab has occupied one of these spaces for months, and has meanwhile become a member of Makan, as well as its graphic designer. At the end of the house's main bay is the balcony, also used as a meeting space, smoking area, and at times as an exhibition space. The balcony serves as Makan’s "eyes" watching the city, and the dramatic terrain of Amman provides a dynamic scenery with complex perspectives, allowing whole layers of the city to expand across the view.

Makan is located in Jebal al Luweibdeh, a neighborhood which first came into being at the city’s center during the forties and fifties of the last century. Its beautiful stone villas and lush gardens bear witness to the architecture of that time, as well as to the cultural and economic status of its inhabitants. Today, Jebal al Luweibdeh welcomes a variety of people of different cultural backgrounds, from small ethnic minorities to transient residents awaiting their immigration visas. This engenders an atmosphere of tolerance and acceptance, and provides the quite streets with a colorful sense of diversity. This area is developing into a hub for the arts in Amman. The Darat al Funun, an art complex of exhibition spaces, includes a library and artist’s quarters [1]; the Jordan National Gallery with its two buildings likewise exhibition spaces, a café and graphic studio that skirt a beautiful park [2]; the Artists’ Association and Dar al Anda Gallery, as well as several artist studios, workshops, crafts workshops, and additional exhibition spaces, all of which is only a few minutes walk from Makan.

During the first years of its young life, Makan has taken part, hosted, and organized a variety of activities, including exhibitions, music performances, international and local workshops, photography workshops, film screenings, and more. In cooperation with the Young Arab Theatre Fund, it held the "Amman Meeting Points" in October 2004, a large-scale art, film and music event held at five different venues, featuring artists from Jerusalem, Beirut, London, Amsterdam, Copenhagen, Cairo, Paris, and Amman. It focused on the issues of borders and travel, Amman being a relevant backdrop because of its historical role as a crossroads territory. The visitors walked from one place to another, and, in doing so, could experience the urban texture of the city.

Sharif Waked from Jerusalem, for example, presented with his video work "Chic Point", his understanding of the oppressive Israeli check point in a humorous fashion. [3] Amal al Kenawy, from Cairo, shocked her audience with two video installations about women and their bodies, in which love stories and social concepts are projected directly onto them. The Amman photographer Oraib Touqan covered a wall with a large black-and-white photograph of two Palestinian refugee women living in a camp in Beirut. In a clashing contrast with the photograph, the long neon lights arranged across a pink wall, and projections on the porcelain surface of a sink in the room, alluded to night life in the same city. The Rotterdam-based artist Lidwien Van de Ven displayed her photographs of different borders in the Middle East on large public billboards normally used for advertisements.

Currently, Makan and the Young Arab Theatre Fund are in the process of organizing this event’s second edition, scheduled to take place in November 2005, and intended to develop into an annual festival shown, in turn, in several neighboring Arab countries and possibly in other locations.

An important part of Makan’s activities are devoted to children fostering their self-expression as a part of their character development. For example, in July 2004, it organized a summer art workshop in six deprived areas of Amman, in cooperation with the Amman Municipality and its local libraries. Conducted by 6 artists, 270 children participated in three different types of workshops for a month: painting and drawing, music, and theatre. They were introduced to the works of young professional artists, exposed to various art genres, trained in different techniques, and informed of a wide range of materials and styles.

In April 2005, a five-day animation workshop was held in Makan, sponsored by the Swedish International Development Agency (SIDA). The participating artists specialized in different fields such as visual arts, theater, and television. They were trained by animation-film specialists from Sweden. The underlying objective was to train these artists to become trainers themselves for children and young people. One workshop was already held in Amman, in a community center for the children of economically disadvantaged areas. Makan is now pursuing the idea of conducting others in the Palestinian refugee camps.

At present, Makan also initiates projects for children outside of the city of Amman, in cooperation with local organizations. Since art is taught in schools in such a formalized and standardized manner, the goal is to encourage the self-expression of these children. The first art workshop, held in the village of Samma, in the North of Jordan, was conducted by the artists Diala and Alma Khasawnih, who volunteered their time and skills in order to work with these children, but also to expand the horizons of their own art-making processes.

Alma Khasawnih, who until recently was the third member of Makan, is now on her way to the United States to study Community Arts Education. Alma is a strong believer in the power of art and art-making. "Creating art is an empowering act. Those people whose whims, desires, opinions, and ideals have been conducted for them by their parents, schools, and governments, if given the chance - and discover in themselves the ability to use a sheet of paper and paints, or maybe scissors and glue, to create from nothing a piece that is admired and acknowledged as art - come to realize a sense of freedom, namely an individual, personal, and self-actualized freedom."

Makan continuously explores new ideas and ventures into alternative areas of art. It consistently contributes to the local scene, creating bridges between Jordanian and international artists through exchanging works and experiences, inviting artists and their shows, and by providing opportunities for exposure.

Studied architecture and interior design. She currently resides in Amman, Jordan, where she does art and writes.