Cairo-based gallery, a center of alternative art in the context of the contemporary Egyptian art scene. 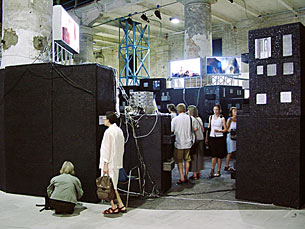 The Townhouse Gallery was founded in 1998 on the first floor of a rickety monument to pre-revolutionary aesthetic in the heart of Cairo's mechanics' district downtown — an area that was once a bohemian stamping ground for the city's bibliophiles, art students and beyond. While director William Wells had no sense of the direction the gallery would eventually take, the reaction to Townhouse's opening was a considerable one — the momentum born of it even greater.

And Wells' timing was an important one. Historically, lack of funding in Egypt outside government channels (the state has long been the primary patron of the arts), a dearth of rigorous critics and the closed nature of venues to alternative media among countless other factors have proven debilitating, engendering the maintenance of a status quo in the arts, old-guard-style. Given such realities, the novel infusion of energy in the visual arts naturally found a home amidst a handful of private galleries (Townhouse among them), spaces that defy the decorative and commercial variety which have long dominated Cairo's posher districts and, to a great extent, have characterised the collectors' market. The grounds were set for one of the most exciting and novel movements in contemporary arts – one that defies the dictates of culture brokers or post-modernism's massive inclusion project(s).

The Nitaq Festival, held in both 2000 and 2001, would serve as perhaps the most palpable sign that the Egyptian art scene as we knew it had been shaken up. An initiative of three independent galleries (Karim Francis, Mashrabia and the Townhouse), the downtown arts festival was unprecedented in the degree of excitement it created in the city, and importantly, the view it provided as to the tendencies of a new generation of artists working within idioms that defied prevailing notions of contemporaneity. Engineered to start on the very day of the 2001 Cairo Biennale's opening, the second Nitaq in particular served as an “off” version in every sense of the term. While the Biennale was characterized by a reliance on tradition both in concept and curation, Nitaq would prove most unconventional, shaking up stagnant conceptions surrounding the use of space, medium and the potential for dematerialization of the art object. Like true post-modernists, the preferred avenue of expression for the artists at Nitaq was multi-media installation executed with conceptualist tendencies. A number of the Nitaq artists, Lara Baladi, Amina Mansour, Hassan Khan, Wael Shawky and Mona Marzouk among them, have since gone on to exhibit widely internationally.

While the Nitaq initiative fizzled after the second year amidst ambiguously messy cultural politics, a number of events have been initiated that have recreated that energy — Townhouse's PhotoCairo and Open Studio Project (the latter a two-week international residency programme) prominently among them. PhotoCairo, as Egypt's first exhibition programme dedicated to photography, has served as testament to the power of photography in this context — hitherto largely unexplored. Initiated in 2002, and held again in 2003, the programme's mission is to bring attention to the enormous potential of the photographic medium and its value as a tool for self-expression. The gallery is in the midst of preparing for the 2004 versions of both PhotoCairo and the Open Studio Project.

In the meantime, Townhouse itself has evolved in the six years since its inception. Never a traditional gallery space, Townhouse has largely grown in relation to the needs of the community around it. It is here that the term space is crucial to the gallery's self-conceptualisation as above all else, Townhouse serves as a platform for those who would otherwise not have access to one —from theatre groups who are in need of rehearsal space to film and videomakers whose entries make it into the monthly film programme, or even children hailing from refugee backgrounds (the gallery has been running regular arts workshops in this realm for the past year). At the moment, the gallery is in the midst of establishing an ambitious arts reference library.

Geography. Geographic location is central to the operation of Townhouse as a space. Situated at the junction of two lanes in the midst of the aforementioned auto-mechanics' district, the gallery is a small piece of an urban microenvironment. The gallery's relationship to the lane and its residents has engendered a near-anthropological approach to its operation. The young men who run and maintain the gallery on a daily basis are from the neighbourhood in question, while the gallery draws upon the lane's services in ubiquitous fashion — whether for electrical work, construction or other artisan activity. Meetings with residents of the lane are held regularly surrounding decisions that may have an effect on the local dynamic, while the ground floor of the gallery serves a prayer room for the neighbourhood. Indeed, the surrounds inform the gallery and its sensitivities completely — and vice versa.

And while the Townhouse Gallery has been the focus of much of the activity in Egypt, there are an increasing number of initiatives going on within the city independent of space. During 2003's PhotoCairo event, for example, a number of students from the city's art colleges initiated their exhibitions in creative fashion — using street facades, internet cafes and abandoned studio spaces to showcase their own works.

A number of new cultural institutions, the El-Sawy Centre and Al Mawred Al Thaqafy among them, have mandates that incorporate the visual arts in some manner. All of this independent activity bodes well for the arts scene.

In the meantime, collective heads have turned; art magazines are devoting entire issues to the Arab world (a convenient, if not naive umbrella), artists are being picked up by galleries in Europe and America and even for the first time in history, Egypt boasted of three independent selections at the last Venice Biennale (Sabah Naiem, Moataz Nasr and Shawky). Curators, blue-chip and lesser-knowns alike, continue to make their way over the Mediterranean — albeit at times in criminally quickie fashion (read: canonical shopping trips).

But despite the marked momentum, obstacles remain in Egypt and the greater region. Perhaps most prominently (among obstacles), politics remain intimately tied to the arts — perhaps inevitably the case in a state in which there is a premium placed on expression. As a result, the Egyptian art scene in particular lies visibly bifurcated, arguably split between the official art realm … and everyone else. Everyone else usually translates to the handful of independent galleries, as well as isolated initiatives from artists and the occasional cultural centre. While the noted schism has been exaggerated at times (doubtless to suit particular interests), it is undeniably there.

Nevertheless, cultural actors press on. Artists continue to engage in novel, enterprising ways. And while the access and platform afforded a new generation of Egyptian artists is undeniably linked to the seductive cultural politics of a post 9/11 world, questions remain as to whether this activity and interest is in fact a passing fancy, or instead, if the foundations are being built for something bigger than that. I would tend toward the latter.

Graduate student at Harvard University. She worked as curatorial assistant at the Townhouse Gallery from 2002-2004.