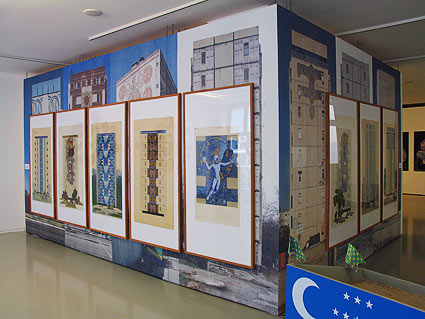 Following an earthquake in 1966, during which Tashkent - capital of independent Uzbekistan since 1991 - was largely destroyed, the city became an experimental laboratory for industrial architecture. The designs for façade decorations by Nikolai Scharski and others present political propaganda of the Soviet Union clad in traditional Islamic forms.

Nikolai Scharski
* 1931 Belfort, France. The family moved to the Soviet Union when he was 16; he has been living in Tashkent since 1970.

Tour through the exhibition of art and architecture in Central Asia, ifa-Gallery, Berlin.