From the Red Star to the Blue Dome

Tour through the exhibition of art and architecture in Central Asia, ifa-Gallery, Berlin. 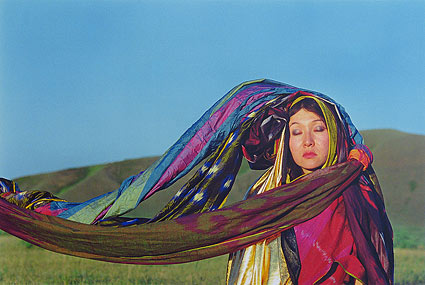 With this exhibition in the ifa Gallery Berlin, the Institut für Auslandsbeziehungen (Institute for Foreign Relations) continues its series "Islamic Worlds". This includes the show "Love Affairs", which we reported on in August 2003.

The focus of the exhibition "From the Red Star to the Blue Dome" is on artists who are dealing with "issues of the new religiousness and re-Islamization of society and their effects on people's lives" (from the press release). In installations, photographs, and videos, the artists address principally the relationship of modern life to tradition and the role of women. They pursue autobiographically the roots of their origins and, in new and contemporary ways, make the rituals of shamanism, other religions, and pre-Islamic cults their own. They sarcastically satirize the bogeyman image spread by western media.

In addition, the exhibition encompasses a documentation of about 50 contemporary architecture projects in Central Asia. They clearly draw to mind the old Islamic traditions and the associated search for identity, proving that such already existed, even during the era where these countries were part of the Soviet Union.