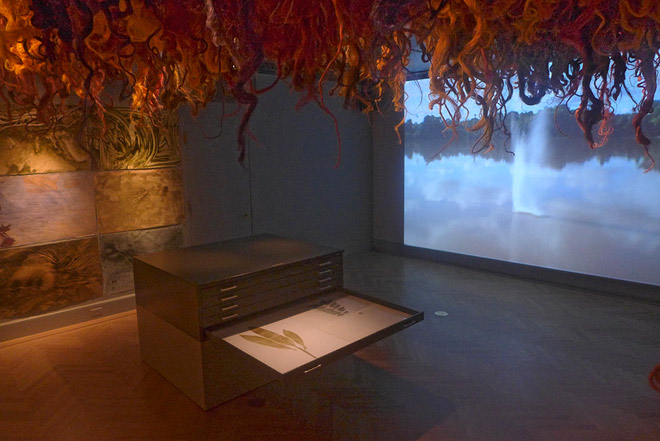 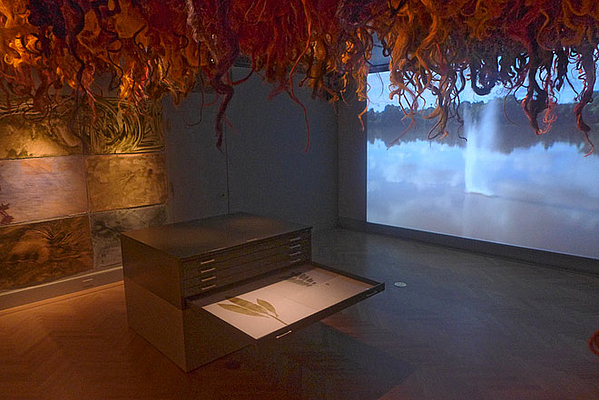 Color Amazonia. 2006-2013
30 papers and 220 bundles of fique fibers tinted with natural dyes, flat file with 10 monotypes
Color Amazonia is the result of seven years of ethnobotanical research on natural pigments in the Colombian Amazon rainforest conducted by an interdisciplinary team led by artist Susana Mejía. The installation consists of papers and fibers dyed with natural pigments and monotype prints made directly from plants. Tinted fibers from the fique plant, which is native to the Andean regions, hang from the ceiling, mimicking the way they were originally left to dry in the jungle. Color Amazonia introduces the theme of the natural environment of the Amazon River, particularly the plants that grow on its banks and the natural fibers and pigments that are used by communities alongside it.

Río (River). 2005
Video, 1:50 min.
The video Río (River, 2005) by Alberto Baraya (* 1968 Bogotá), filmed while he was documenting a naval patrol ship’s trip down the Amazon and Putumayo Rivers, presents the troubling world of contrasts that is the river environment of Colombia. A work of great poetic and political resonance, Río depicts the massive rivers that serve as primary tributaries for drug trafficking, waterways that are home for the guerrilla groups that, in the absence of a strong state, control the turbulent outlying territories.