His ethical and political commitment, as well as the contemporary aesthetic relevance of his work where the reasons given by the Jury of the Venice Biennial, when he was awarded the Golden Lion in 2007.

Born in Buenos Aires in 1920, Ferrari initiated his artistic production in Rome, as a self-taught sculptor, making works in terracotta. Back in Buenos Aires, he worked in ceramics, plaster, cement, wood, stainless steel wire, collages and drawings.

Since 1962, he started to a introduce conceptual strategies in his work, connecting drawing and writing. He went back to work in metal esculpture, and also experimented with photocopies, mail art, heliography, video-texts, musical instruments, printmaking, collage and assamblage.

All these ressources were useful for Ferrari to strongly criticize the political and religious power.

In 1965, he did his most emblematic artwork, La civilización occidental y cristiana [Western and Christian Civilization], a Christ crucified on a fighter jet, a fundamental piece in history of political art.

In the last years his production had reached great visibility and international recognition.

See in Universes in Universe:
León Ferrari - Brailles and Rereadings of the Bible
Exhibition at Malba - Fundación Costantini, Buenos Aires, March - July 2012. Text by curator Florencia Battiti and a visual tour through the show. 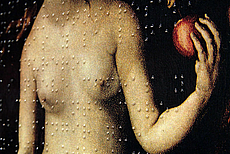 Brailles and Rereadings of the Bible, March - July 2012, MALBA. Text by curator Florencia Battiti, photo tour through the show.