Features about the archaeological site in Mexico, which was the first metropolis of the Americas between 100 B.C. and 650 A.D.

When the large touring exhibition "Teotihuacan - Mexico’s Mysterious Pyramid City" 2010 was on view in Berlin in 2010, Universes in Universe published several features about the archaeological site, which is one of the world's most impressive places.

Teotihuacan was the first, largest and most influential metropolis on the American continent, between 100 B.C. and 650 A.D. In its heyday, the city reached an area of about 20 square kilometres, with a population of more than 150.000 people. It is still not known, who were the inhabitants of Teotihuacan, and why the city was abandoned around 650 A.D. Not even its original name is known.

In-depth explanations and information as well as lots of photographs can be found in the following features:

Teotihuacan
Photo tour and introduction: History, the city, main divinities, system of rule, trade, war, downfall.
Teotihuacan Exhibition
Photo tour through the presentation in Berlin, July - Oct. 2010. Including information about the exhibits.
Collection in Berlin
Objects from Teotihuacan at the Ethnological Museum Berlin, selected and commented by Dr. Maria Gaida.
Tunnel in Teotihuacan
The entrance to galleries under the Feathered Serpent Temple where ancient rulers might be buried was located in 2010. 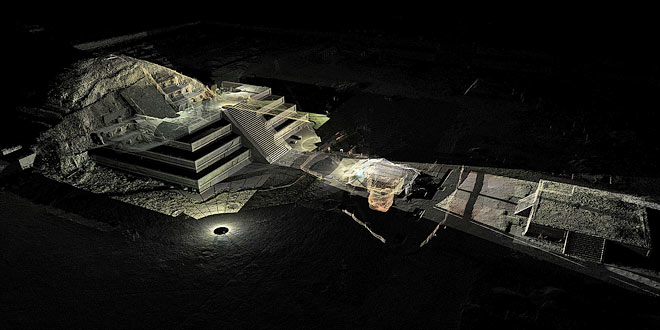 aprox. 50 km to the north east of Mexico City