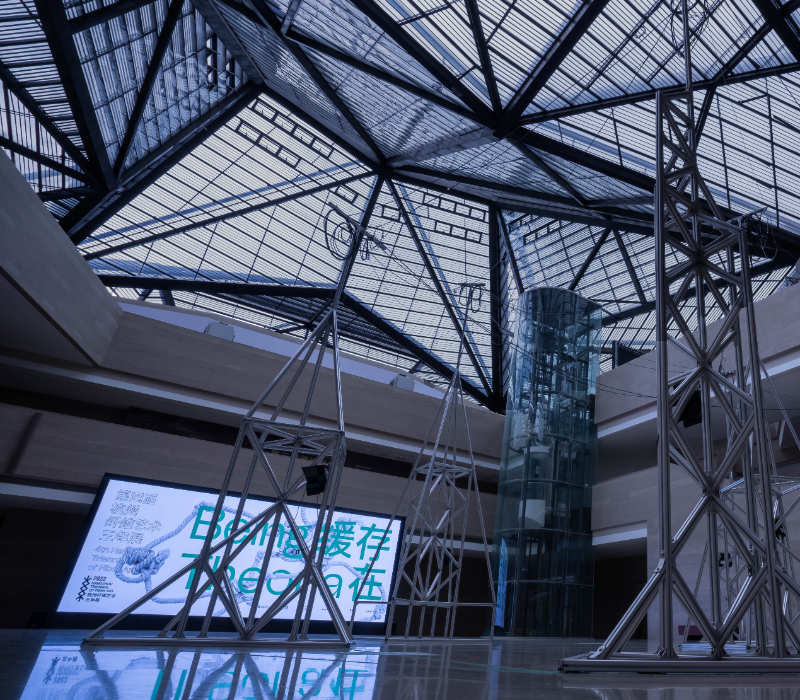 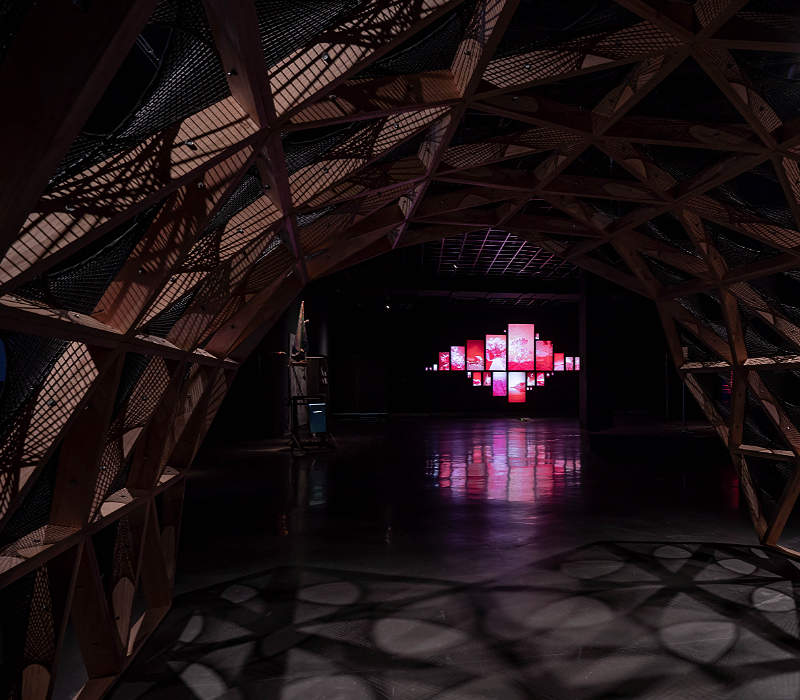 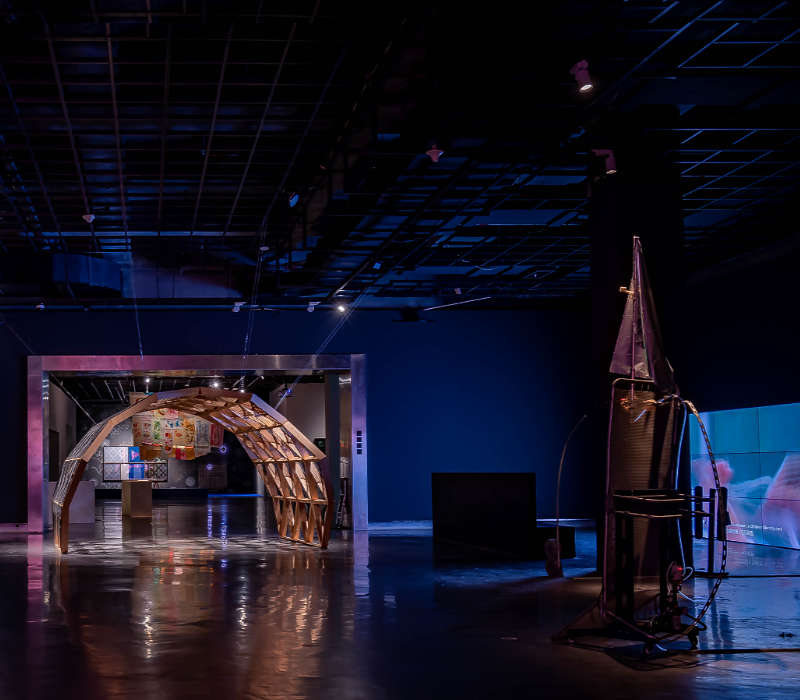 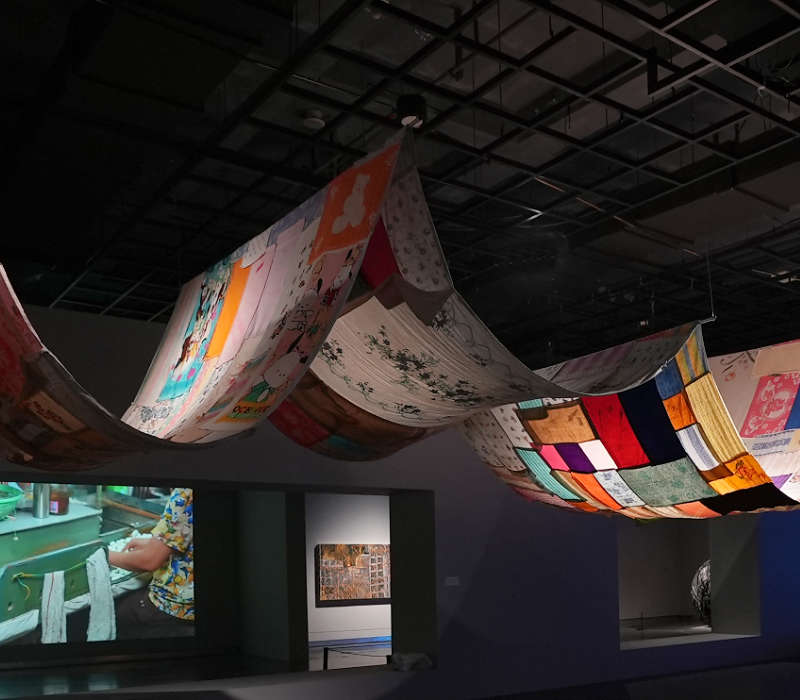 Photo tour
a selection of works with information

There is a "cosmotechnics" inherent in Mì/Sī (糸/纟), the radical for "silk" in the Chinese language, such as the archetypes in conceptions of "relation": clue (Xiànsuǒ / 线索), organization (Zǔzhī / 组织), web/network (Wǎngluò / 网络), system (Xìtǒng / 系统); the general name of colours: red / 红, green / 绿, purple / 紫, scarlet / 绯, crimson / 绛; and "Wén / 文(纹)", which means, together in one word, text, texture, culture, and civilization. These come from the form of silk since the time of ancient China, alert us that fiber/textile is the basic construction of the world, as well as the phenomenon of and universal metaphor for human thought.

Drawing inspirations from fiber/textile, the curatorial team of the 4th Hangzhou Triennial of Fiber Art propose the term "缓存在 (Huǎn Cún Zài)" to suggest a redefinition and a re-interpretation of "art": the way "art" occurs and exists is a kind of "theoria-being".

This is echoed in the English translation, "Being Theoria", which itself derives from Aristotle’s "theoria" (contemplation) from the time of ancient Greece. Poesis (techne) / praxis / theoria come from the "three activities" categorized by Aristotle. "Being Theoria" reacts to the divide between art emphasizing production (techne) and art emphasizing participation and intervention (praxis) today.

There is also an intertextuality between the Chinese and the English titles. "Huǎn Cún Zài / 缓存在" is a combination of two words: huǎncún / 缓存 (cache) and cúnzài / 存在 (being). Huǎn / 缓 (with the silk radical) means slow, moderate, or postponed; it belongs to the radical of Mì. Meanwhile cúnzài / 存在 is the equivalent of the philosophical term "being". Huǎn Cún Zài could be understood as "postponed-being" or "cached-being", and huǎncún is the translation of "cache" in computerese but could literally mean "storing / existing slowly", which is the daily life situation of the pandemic.

From the initial moment, the curatorial team has defined itself as "weavers", inviting artists and scholars to join in and establish connections, and form a network of Research Weavers responding to a reflective fiber-world. The triennial is not segmented but linked up through several "clues", viz. characters with the silk radical: "Wén / 文" (text / texture / culture / civilization), "Xù / 绪" (emotion / thought), "Xiàn / 线" (lines / trajectory), "Zhī / 织" (weave / labor), "Wǎng / 网" (net/web), "Jié / 结" (tying knots), and "Zōng / 综" (diversity / complexity). These clues are intertwined in space and are presented as a series of immersive "Theoria Space" for people to linger in and meditate. 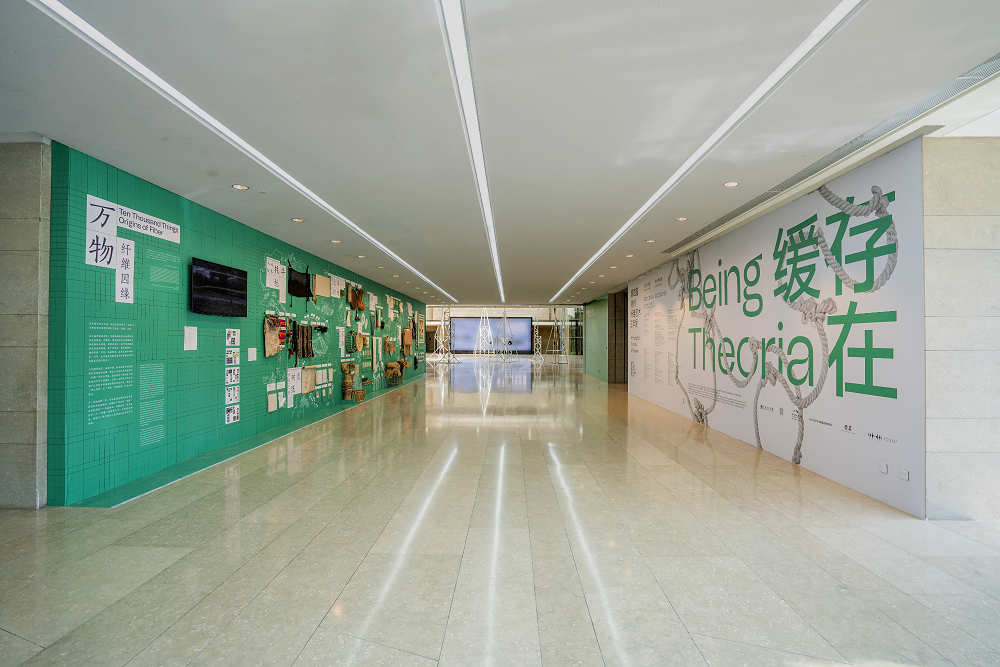 A selection of works with information

Taking place from 30 September to 4 December 2022 at the Hangzhou Museum, as a special project of the 4th Hangzhou Triennial of Fiber Art in 2022,"净因|Pure Reason" invited 12 worldwide artists/groups to create works in the museum's open-air and indoor non-exhibition spaces around the Five Dynasties "Jingyin Temple" stone pagoda pedestal housed in the collection of the project partner Hangzhou Museum.

"净因 | Pure Reason" is a public project taking place in the museum, an urban project dedicated to Hangzhou, and an experimental project exploring the boundaries of the Hangzhou Triennial of Fiber Art. It seeks to extend the theme of the Triennial, "缓存在 / Being Theoria", by establishing the connection between the Buddhist doctrine "Jingyin" (literally means pure cause [hetu]) and Kant's "Pure Reason", and asking in a more focused way what "fiber" is an archetype of "thinking", especially the experience process from the concrete matters to the thought archetypal: "thin/fiber (纤 , xian)", the thin silk; "dimension (维 , wei)", the carriage cover; "thread (绪 , xu)", the end of the silk; "memoriam (缅 , mian)", micro silk; "deduct (绎 , yi)", draw silk... The exchange and translation of meanings from different cultural traditions not only reflects the tolerance and connotation of Hangzhou, the Asian Games City, but also shows the experimental spirit of this edition's HTFA to break through the traditional definition of fiber art.

Hangzhou is situated in Zhejiang Province; it has a very deep historical and cultural heritage. The history of silk production in Hangzhou can be traced to the age of the Liangzhu Culture (circa. 3400 – 2250 BC). The surrounding West Lake Cultural Landscape is named on the UNESCO World Heritage List, the only Lake District in China to have been so honoured. In its history that goes back over 2,200 years, Hangzhou is not unlike a pearl on the Southeast Coast of China, with a natural shimmer as well as humanistic gloss. The ancient proverb says, ‘Suzhou and Hangzhou, Earthly Paradise’.

Historically Hangzhou has been an area with significant agricultural output. Marco Polo, after visiting the Yuan Dynasty Hangzhou, has proclaimed it to be "the most glamorous city in the world." In the long course of history, the ancient capital, surrounded on three sides by 'cloud-capped hills' and on the fourth by the city, has attracted many emperors and aristocrats as well as droves of men of letters, whose sojourns here have inspired a wealth of odes to the Jiangnan (i.e., the area south of the Yangtze River). While keeping watch on the ink and water landscape characteristic of the Jiangnan, it also composes a unique, human story.

The site of the current campus of China Academy of Art, by West Lake, was established in 1928. It was the first comprehensive national institution for higher education in art. China Academy of Art is a pioneer in contemporary Chinese art education and has a unique and distinctive position within art at a national and international level.

In China, research in contemporary fiber art started with the establishment of the Varbanov Tapestry Research Centre at the Zhejiang Academy of Fine Arts (the predecessor of China Academy of Art) in 1986 and in collaboration with Zhejiang Art Carpet Factory. In 1987 three tapestry works created by the Research Centre were selected for the Biennale Internationale de la Tapisserie in Lausanne, Switzerland and became international renowned. This saw the advent of a new era for research in Chinese contemporary fiber art. Influential exhibitions were then held in Shanghai in 1987, Hong Kong in 1988, and than in 1989 in USA and Japan.

China Academy of Art leads the way in the development of contemporary fiber art in China. It maintains this position by combining people, location and a high-end education. There is a number of very experienced faculty staff that is fully engaged in international activities, exchanges and events.

In addition, the Varbanov Tapestry Research Centre has been expanded into a Fiber and Space Art Studio, then transformed to Department of Fiber Art and Contemporary Fiber Art Research Institute of CAA, that is fully incorporated into the educational system of the academy. Fiber art education has been renewed with courses at undergraduate, postgraduate and PhD levels.

Zhejiang Art Museum (ZAM), with a coverage of 35,000 square meters, is located on No.138 Nanshan Road, Hangzhou, against Wansongling and opposite to the West Lake. In the museum, there are 14 exhibition halls of different sizes, taking up 9,000 square meters, including 6 exhibition halls with constant temperature and humidity. Besides, the museum is equipped with multiple supporting facilities such as the Central Hall, Skylight Promenade, International Academic Reporting Hall, Multi-functional Hall, Hall for Assessment and Appreciation, Center for Art Books and Documentations, Children’s Fine Arts World, Arts Bookstore, Store of Arts Materials and Supplies, and Coffee Bar.

Since its opening in August 2009, the museum, on behalf of the nation, is dedicated to the exhibition, display, solicitation, and collection of art works and art literature, with which it aims to provide and present academic research, education promotion, international exchanges and public cultural services. ZAM is committed to collecting and exhibiting art works, cultural relics and documentations that reflect the development of arts in Zhejiang, especially those created by modern and contemporary artists who are either Zhejiang natives or engaged in significant artistic events in Zhejiang.

Hangzhou Museum is located in the West Lake Scenic Area, adjacent to Hefang Historical and Cultural District. Hangzhou Museum has a collection of archaeological and cultural relics, that inherits Hangzhou’s history and local memory.

In October 2001, Hangzhou History Museum was established and opened to the public. At the end of 2011, it was renamed as Hangzhou Museum. Hangzhou Museum covers an area of 13,000 square meters with exhibition area of 7,000 square meters, which constitutes of two Quartiers: the North and the South Quartier. The main exhibitions are: "Archaeological Relics in Hangzhou", "Historical Monument and Cultural Heritage in Hangzhou", "Chinese Calligraphy and Paintings Collection", "Furnishings and Supplies of Chinese Scholars", "Stamps Collection of Hangzhou Museum", and a General History of Hangzhou, "The Memorable of Hangzhou".