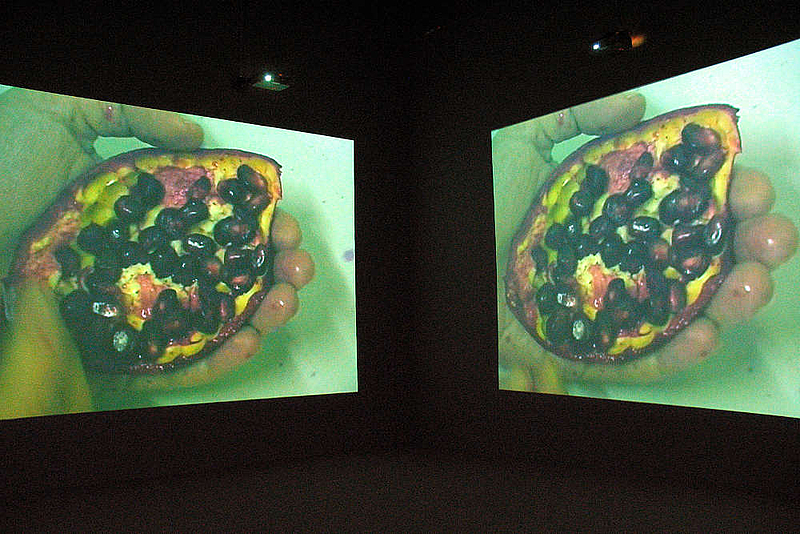 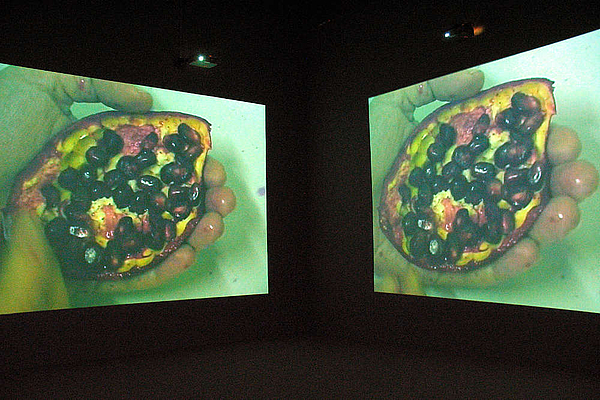 The artist about the work

With the pomegranate (the skin and seeds) as the central image, this video is an attempt to reflect upon the human need to find that perfect niche to fit into as well as that need to return to our origin, all of which is to satisfy the desire to belong.

The seeds are displaced; their displacement is to be found in the fact that they exist outside of their skin (nest, home, nature), and there is the desire to 'un-displace' them, to secure them in their proper pockets. Can a piece of thread be re-sown into the fabric through the very same holes that it was taken out of? The Pomegranate is an emblematic work that poses this question, this maddening, ritualistic behaviour, with the fruit utilised as a representational object reflecting upon the absurdity found around the entire issue of belonging. It is absurd because to belong (whether to any social order, cultural belief, or to physical territory) is not without its demanding paradox, its special kind of torment.

It is similar to the calculative pace of an operating room, where the 'body' (of the fruit) is etherised, opened, and dissected. Which organ of the body is being operated on? Is it the heart once removed from its hollow and now daring to heal its wound, to reinstate it into familiar territory? Returning to our skin, our core, finding the 'perfect' skin to fit into, to nest in, or nestle in, is everybody’s desire. It is an ambitious desire for homecoming that sheltering home, or comforting embrace yet it has potential suffocating elements as well, necessitating a ritual of things to tear apart and things to put back together again, demanding self-analysis and introspection; and we are found striving to collect our many scattered parts in order to ultimately reassemble the fragments of our identity.