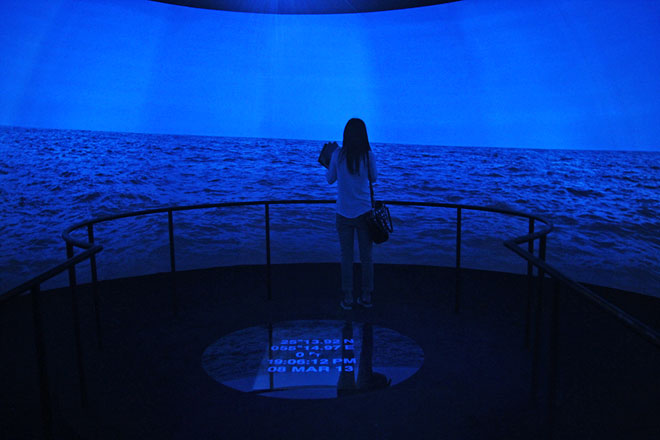 Video sequence
A video walk through the UAE pavilion

Commissioner:
Dr. Lamees Hamdan
Member of the Board of Directors of the Dubai Culture and Arts Authority.

The 2013 National Pavilion of the UAE features a specially commissioned work by Mohammed Kazem from the Directions series which seeks to address the challenges of creating both "institutional" type artworks for Emirati artists as well as (re)creating a unique experience for the Venice audience.

"The Directions series is a conceptual project that Mohammed Kazem has constantly revisited for over a decade to create various bodies of work. In this series, he is well known for utilizing Geographical Positioning System (GPS) coordinates to suggest 'documentation' of his location. He replicates and represents the coordinates in various multimedia installations and photographic series. Natural elements feature predominately throughout this work, with an additional emphasis on water and the sea," said curator Reem Fadda.

From her curatorial concept, Fadda stated: "Mohammed Kazem, a pioneering contemporary artist and thinker from the UAE, represents a generation that emerged from an avant-garde legacy of arts and artists in the UAE and the surrounding region, one that has thrived since the mid-70s with advocates such as his mentor artist Hassan Sharif. The curatorial research for our pavilion's presentation in Venice will see Kazem as the leading individual artist and thinker he is and highlight his contribution to the local artistic heritage."

"By engaging the work of Kazem, we can witness the urban modernity of an emerging nation through the eyes of its individual artists. In pursuing this initiative we hope to demonstrate that the developments we see in the region today do not come from a void, but rather evolve from the contemporary thought and practice of artists and intellectuals like Kazem, whose work has consistently interrogated the relationship between the individual and his/her social, urban, and natural environments," elaborated Fadda.

Initiated and supported by His Excellency Abdul Rahman bin Mohammed Al Owais, UAE Minister of Culture, Youth and Community Development, the National Pavilion has been developed and presented for the third time under the leadership of its Commissioner, Dr. Lamees Hamdan, and is supported for the first time by the Sheikha Salama bint Hamdan Al Nahyan Foundation.

The National Pavilion has appointed the Emirati design house, Fikra, lead by Salem Al Qassimi to produce the visual elements related to both the organization and the exhibition.