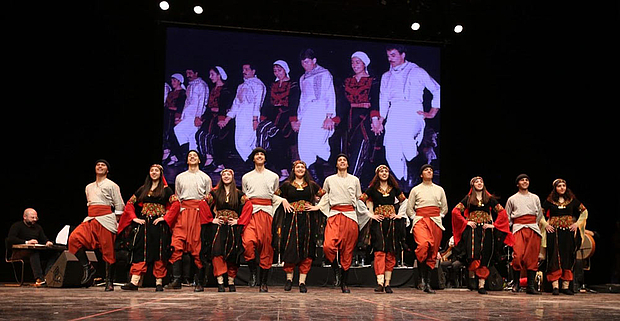 El-Funoun Palestinian Popular Dance Troupe was established in 1979 by a small number of enthusiastic, talented and committed artists. Since then, El-Funoun has been crowned as the lead Palestinian dance company in Palestine and throughout the diaspora. With an impressive track record of over one thousand performances across the globe, it has also produced fifteen productions and over ten dance scenes. Over the years, El-Funoun has received several awards and commendation certificates for its work.

El-Funoun has always aimed to express the spirit of Arab-Palestinian folklore and contemporary culture through a unique repertoire comprising folkloric dance forms, called dabke, combined with more elaborate choreography that embodies El-Funoun’s own unmistakable vision of Palestinian dance. El-Funoun is widely recognized as the cultural entity that has played the most significant role in reviving and reinvigorating Palestinian dance and music folklore.

Since its founding in 1979, El-Funoun has realised the importance of enhancing the connectedness of Palestinians wherever they are through their roots, culture, and history. After the group’s remarkable first performance at the Dabke festival in Birzeit University in March 1979, the collective decided to adopt the name “El-Funoun Palestinian Popular Dance Troupe”.

Led by these convictions, El-Funoun continued to develop and grow despite the banning and expropriation of any form of Palestinian cultural expression by the Israeli occupation. In the 1980s more enthusiasts joined, believing in the crucial role of arts and culture in countering systematic attempts to suppress the Palestinian national identity. “Folkloric Scenes” in 1982 and “Wadi a-Tuffah” in 1984, followed by “Mish’al” in 1986 emphasised these convictions. They carried both artistic and political messages and received unprecedented popular reception.

Moreover, El-Funoun role in reviving Palestine’s rich heritage of music and dance was not limited to its productions but also by initiating events such as the “Palestinian Folklore Day” in 1986 as an annual celebration every October 7th, which continues to be celebrated today all over Palestine. In 1987, El-Funoun played a key role in establishing the Popular Arts Centre, a community organisation committed to raising awareness about the arts, as well as opening opportunities for community members to participate in artistic activity and expression. Through the Centre, El-Funoun’s message has been able to reach and affect many schools, organisations and localities.

In Palestine and across the diaspora, the Troupe has achieved unprecedented popular recognition; in fact, many of the El-Funoun’s songs have become household tunes. El-Funoun’s community work has continued to thrive, welcoming hundreds of members from diverse social backgrounds across Palestine. To many, El-Funoun has become their second home and an arena where various generations meet: dancers, members, artists, administrators, and board members, all motivated by the vision of the Troupe. Over the years, a strong sense of belonging to and ownership of the Troupe has developed and still endures today.

From the Archive Room