Research and exhibition project by the ifa, with the collective KUNCI from Yogyakarta that transforms the gallery into a radio station. Ifa Berlin, 15. April - 15 May 2016. 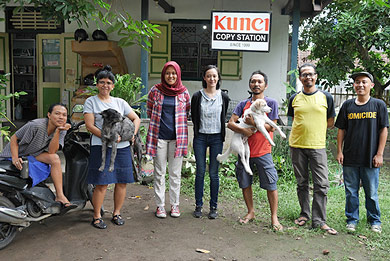 What does sharing mean today, and under which conditions does it take place? What are the spaces and places of community, and how can we maintain and revive them? From which concepts of community and collective knowledge can we learn?

The research and exhibition project by the ifa in cooperation with the Artspace NZ Auckland, New Zealand, brings together artistic and sociological positions from the Pacific region with European perspectives, projecting manifold points of views on the practices of sharing, collaborative modes of production and collective knowledge systems.

Open Space: Radio KUNCI @ ifa Gallery Berlin
As a kick-off, the ifa Gallery Berlin shares its space with the transdisciplinary collective KUNCI Cultural Studies Centre from Yogyakarta. In a four-week research project, KUNCI will transform the gallery space into a temporary radio station, in which the Indonesian practice of “numpang” will be collectively questioned as a politics of sharing space, place and time. The notion of “numpang” refers to spatial positionings and vernacular social interactions that demand the consent of others. Be it car sharing, temporary shelter, or the occupation of public spaces: Which values are being exchanged? How are values and profits defined, how does this problematise notions of real estate? And how does the practice of “numpang” undermine the relation between individuality and collectivity?
Local and international actors and initiatives are invited to negotiate their perspectives on sharing in different geopolitical situations. Radio KUNCI will broadcast programmes about weekly topics.

KUNCI Cultural Studies Centre acts as an independent, transdisciplinary collective at the interface of theory and practice. Since its foundation in Yogyakarta, Indonesia, in 1999, KUNCI is dedicated to researching, producing, and sharing critical knowledge—by means of publications, cross-disciplinary encounters, research, artistic interventions, and educational practice.

About the ifa
The ifa is committed to a peaceful and enriching coexistence of people and cultures worldwide. It promotes artistic and cultural exchange in exhibition, dialogue and conference programmes. As a competence centre for foreign cultural and educational policy, the ifa connects civil societies, cultural practices, art, media and science. It initiates, moderates and documents discussions about international cultural relations. The ifa has a global network and counts on long-term cooperation. It is supported by the German Federal Foreign Office, the state of Baden-Württemberg and the city of Stuttgart.
With the opening of this project, the ifa welcomes Alya Sebti as the new head of the ifa-gallery Berlin. 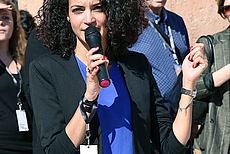 The Moroccan-born art historian will be in charge of the gallery of the Institute for Foreign Cultural Relations (ifa) in Berlin as of 1 April 2016.