Original drawings for the much-noticed graphic novel by the Syrian artist, presented in an exhibition at Crone Gallery Berlin, 9 April - 18 June 2016. 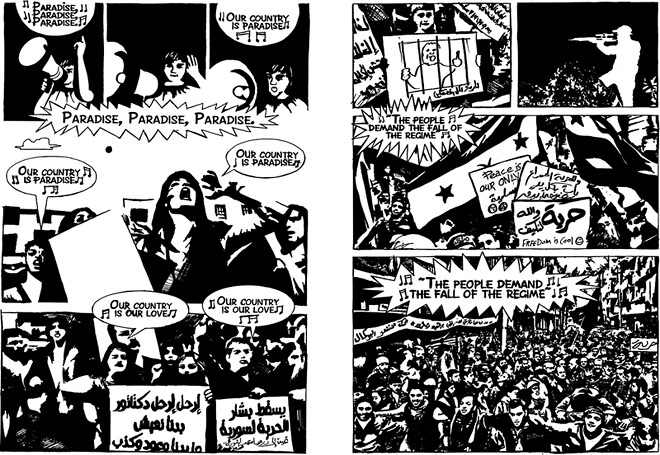 Hamid Sulaiman is a Syrian artist and cartoonist. Born in 1986, he lived his entire life in Damascus. After studying architecture, he started to work and exhibit as a graphic artist in his home town. When the revolution began in 2011, he immediately became involved, publishing drawings to protest against the use of torture, and trying to organise media coverage of the demonstrations. Officers of the regime quickly arrested him and threw him in prison for a week. There, Sulaiman faced three choices: revoking his revolutionary ideals and pleading allegiance to Bashar al-Assad, being put on trial, or leaving the country. He chose the latter and fled to Egypt, where he started his application procedure to obtain a visa for Germany, which later allowed him to settle in Paris.

At that time, he thought his exile would be brief: "I believed I'd stay away for a few weeks, or maybe a couple of months. All revolutions of the Arab spring had managed to overthrow dictatorships in a relatively short time. I thought it would be the same in Syria." The story of his graphic novel Freedom Hospital begins during the same period and his main character shares the same hope. Her name is Yasmine, she's a student in pharmacology who has set up an underground hospital for wounded revolutionaries to be treated safely. She believes the war will be over within 10 months and is waiting, eagerly, to see the fall of Bashar al-Assad, after which she intends to leave for the United States where she has been accepted for a PhD. This genuine optimism clenches the heart of any reader aware of the incessant atrocities that have been going on in Syria for the past five years.

In Freedom Hospital, those years are translated into five seasons: spring, summer, autumn, winter, and spring again, during which the humanitarian crisis worsens as the political situation becomes increasingly intricate. For every narrative ellipsis, Sulaiman writes at the top left corner of the page to indicate the amount of time that has passed and its equivalent in the number of casualties: "two days and 176 victims later, three months and 12,469 victims later …" A terrible countdown that continues unabated.

Yasmine is a strong female character. Coming from a moderate Sunni family, she appreciates the history of Islam but lives her life in a rather secular way. In the Freedom Hospital, however, we encounter Syrians from all ethnicities and faiths: Sunnis, Kurds, Alawites, Assyrians, Christians, Agnostics, supporters of the Muslim Brotherhood, and Sophie, a journalist who was born in Syria but grew up in France, and with whom Western readers can easily identify. As the story unfolds, we witness the way in which each of these characters comes to grips with the surge of bombings, the divisions within the revolutionary factions, the involvement of foreign powers and the rise of the Islamic State.

The story of Freedom Hospital is fictional. Hamid Sulaiman composed it from scenes he witnessed and people he knows, such as his friend Hussam Khayat, who was tortured to death in a Syrian prison and to whom the book is dedicated. However, the artist has also depicted several images from authentic footage of the war and incorporated them to his narration. As we recognise those horrifying YouTube clips that circulate on our social networks, showing refugee camps, ISIS propaganda or Russian air raids, his narrative gives us the opportunity to see those scenes from the viewpoint of those directly affected and to understand their real impact: "People watch those images on their television or computer screen, but it’s very difficult to make sense of it – to understand how one thing influences another – when there are so many different powers at stake. By associating them to anecdotes and personal stories, I wanted to create a link that binds everything together, that humanises the repercussions of the conflict."

The artist manages to deliver the same intrinsic perspective in his exhibition at the Crone Gallery, which displays some of Freedom Hospital's original sketches. Most have been stripped of their text, leaving the characters of the book speechless, much like the viewers who are confronted with the tragedy of their suffering. This allows us to focus on the work of Sulaiman as a graphic artist and the techniques of drawing he chose to convey his perception of the war. His black-and-white pictures are figurative, but his brush often turns into a game of light and shade where objects become pared-down silhouettes. This style creates utterly poetic images that contrast with the harshness of the topic. "I like to draw in this slightly abstract way to leave space for the viewers’ imaginations," explains the artist. "This war is extremely difficult to describe, especially to those who are not familiar with Syrian culture and history. I find that, sometimes, very realistic images hinder people’s comprehension by imposing a strict vision. I want people to fill the gaps between shadows with their own sensitivity in order to emphasise their empathy."

The pages exhibited are not organised in chronological order. Sulaiman selected them for their ability to provide a direct understanding without the help of narration. Walking around the spacious and luminous room of the Crone Gallery, the viewer is confronted with images of demonstrations, executions, amputations, wounded children, and destroyed neighbourhoods. These are images that we see too often and they need the work of artists such as Sulaiman to prevent us becoming too accustomed to them. However, in between those sombre illustrations there are also images of love, hope, tolerance and friendship, as Freedom Hospital and its occupants still stand and fight to free Syria from all forms of despotism.

The book Freedom Hospital is published in French by çà et là / ARTE Editions. A German edition will be published by Hanser Berlin.