While revealing the many possibilities of seeing the city (Cairo), she raises profound questions about the very practice of photography itself. Curator: Maha Maamoun 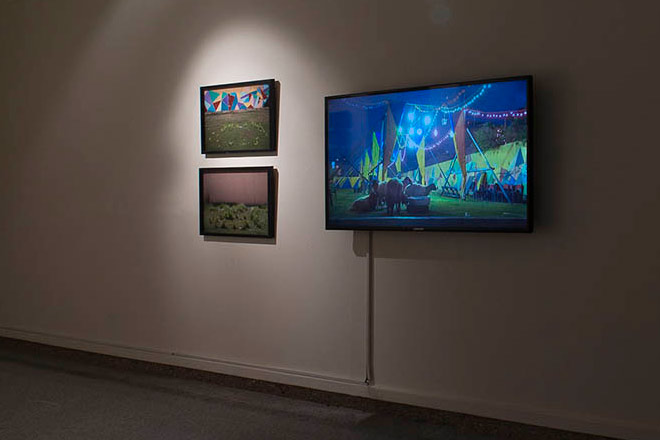 "With cities, it is as with dreams: everything imaginable can be dreamed... Cities, like dreams, are made of desires and fears, even if the thread of their discourse is secret, their rules are absurd, their perspectives deceitful, and everything conceals something else." [1] Perhaps it is Calvino’s description of the city that most closely echoes the practice of Rana ElNemr. From her photographic series of extravagant and often kitschy resort gates on the Mediterranean coast in Coastline (2005), through her installation/collage of the fronts of residential balconies all over Cairo in Telekinesis (2007), to her visual escapades as she drives through the city in Giza Threads (2011), ElNemr sets out to explore the many ways we relate to, understand, and ‘see’ the city. In doing so, she not only reveals the many possibilities of seeing the city and creating all kinds of scenarios to visually perceive it, she also raises profound questions about the very practice of photography itself. ElNemr’s practice hinges on the dual process of expanding our visual and conceptual understanding of space (immediate space, such as personal residence or studio space, to more abstract notions of space, such as the city or even imaginary space) and experimenting with the materiality and meaning of the image.

In her latest exhibition, Assembled in Streams of Synonyms (2014), curated by Maha Maamoun for the Sharjah Art Gallery, ElNemr couples her exploration of spaces, in their many forms and meanings, with a curiosity about new materialities and formats that reflect her artistic interests and preoccupations. She uses photographic prints on archival paper as well as vinyl, 16mm film, 8mm film, animation, audio, and a sculpture to share with the audience the different ways she negotiates meaning through her personal experience of space and of the different mediums that visually translate her ideas in ever-changing and distinctive ways. She investigates the layers of meaning that each medium carries and the connections and overlaps between such meanings and her own artistic and subjective experience.

The Sharjah Art Gallery at AUC is a two-storey space, with a peculiar hexagonal front and a semi-square that ends in a slanted passage in one corner. The exhibition consists of 11 elements or sequences, five on the ground floor (Map, The Dictionary of Imaginary Places, It Became Known That King Mariout Now Has a Library, The Living Object, The Shaft) and six on the first upper floor (Depot, Assembled in Streams of Synonyms, Extent, Department of Squares and Roundabouts, The Khan, It Became Known That King Mariout Now Has a Library). Together they are fragments that work by association between image, text, and various formats of the moving image. Each sequence can stand by itself, reflecting ElNemr’s artistic general interests and questions, but also echoing other connections and links with other sequences and elements, thus serving as building blocks for multiple stories and narratives as experienced uniquely by each audience member.

One enters and is met first with two pictures, a photograph of a hand-drawn map of a garden and a photograph of the book The Dictionary of Imaginary Places on a shelf, suggesting a shelf in a library or at someone’s home. The two images set the tone for the exhibition as an exercise in imagining and re-imaging space. Around the corner, a life-size lamppost lights the triple-height exhibition space. To all intents and purposes, it is a regular lamppost, yet on closer inspection one notices the intervention of the artist, the tilted position of one of the heads (and upon a closer look from the upper floor balcony, more details of the lamppost are revealed, including a resident plant inside the slanted head, reflecting yet again the ways, not immediately perceptible, in which nature infects and cohabits spaces in Cairo). The lamppost casts light and shadows upon two other works inhabiting the main space: 1. a flock of pigeons perpetually taking flight in a looped 16mm video. Their continuous flight with no clear end or beginning brings to mind the metaphor of "flight of fancy". 2. Across the video, a huge night shot of what we learn is the library that King Marriot now has. This second reference/encounter with books will ricochet in different works in the exhibition.

This cohabitation between nature and the most urban of spaces or the periphery of the city is echoed in the six other sequences on the first floor, once in relation to large pipes in what looks like the periphery of the city. And in little hedges abutted by walls. And again in between unfinished high-rise residential buildings, with multiple perspectives showing a secret patch of green. The sequences go hand in hand with the themes of nature, the construction of spaces, and meditative texts that provide an ethereal dimension in how we perceive space and its relation to fiction and its relationship the city. Even the mysterious shelf and the library reappear as a series of small frames of photos of the street leading to and the entrance to a library and in the recorded conversation with an anonymous character who speaks about his passion for nature and libraries.

The play on imaginary spaces was reiterated in large photographs of a fairground and what looks like an abandoned themed park. The juxtaposing of various formats of the moving image (8mm videos, animation… etc.) with the still nature of photography and the contemplative bent of the texts adds a depth and intensity that transforms all these elements into an open space that allows different ways of seeing and various ways of creating and recreating meaning.

Writer and researcher based in Cairo. He has been writing on contemporary artistic practices since 2007.