Conversation with the Tunisian artist about his drawings and installation exhibited at All the World’s Futures, 56th Venice Biennale 2015, curated by Okwui Enwezor. 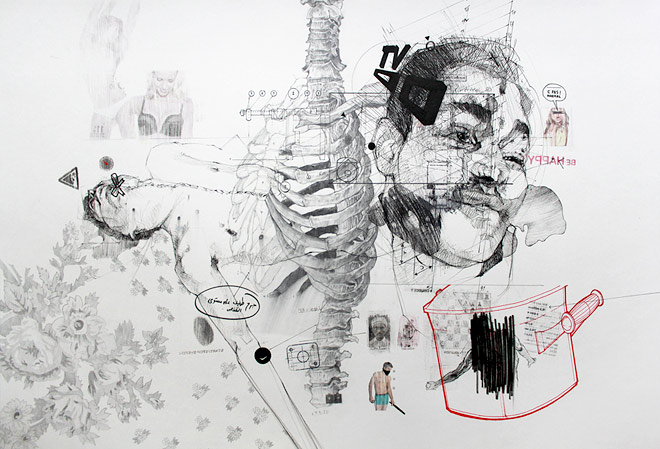 Born in Dahmani, Tunisia, in 1985, Nidhal Chamekh studied fine arts in Tunis and Paris, where he now lives. Chamekh exhibits two works in All the World’s Futures, curated by Okwui Enwezor for the 56th Venice Biennale 2015: De quoi rêvent les martyrs? (What do martyrs dream about?) 2012, a series of twelve drawings completed over two years, and The Anti-Clock Project (2015), a new work produced for the exhibition and comprised of a three-dimensional model and eleven drawings.

Emma Chubb (EC): Can you tell us about the two works that you are exhibiting in All the World’s Futures?

Nidhal Chamekh (NC): De quoi rêvent les martyrs? is a group of twelve drawings made in the form of studies. Each is a drawing in its own right but elements in it refer to the others such that together they make a series. These elements —images and other forms— are taken from here and there, from the Internet via social networks, from newspapers as well as from archives, and then arranged in different ways. Even the transposition varies and refers to different graphic techniques and many “styles.” As a result, each drawing is a complex fabric of images, signs, references, and temporalities, with only one thread that connects and consolidates each drawing: the question posed by its title.

The Anti-Clock Project is a much more recent work that was produced specifically for the Biennale, although I was working with the idea behind it for almost two years. Central to it is the model, which illustrates the project to destroy an urban monument using another architectural element found at the other end of the space. The intervention takes place in the center of Tunis and the model reproduces places from this part of town that seemed important to me. The eleven drawings, hung on the facing wall, extend the project symbolically, historically, and formally. Other elements, such as texts, drawings, photographs, or even construction studies, will certainly be added in the future.

EC: Your work displays great technical mastery. What was your training as an artist?

NC: I studied at the School of the Fine Arts in Tunis and then continued at the University of Paris 1. Above all, my studies allowed me to intensify the rhythm of my practice and to meet others who are also interested by it. But in reality, the School of the Fine Arts in Tunis is an austere place, ruled by an archaic and castrating pedagogy… the disciplines are the same as those put into place more than a century ago by French colonization with some modernizing “reforms.” Luckily during my time there, there were several professors who tried to give these academic courses another flavor. What really saved me was drawing endlessly, because at this particular moment, there were several of us who drew everywhere and all the time.

EC: You distinguish between figuration and representation, saying that your work is figurative but not representative. Can you explain what you mean by this distinction?

NC: It is very difficult to express succinctly the relationship my work has to figuration and representation. It comes from a very subjective understanding, even more so because the two terms largely imply one another and are sometimes confused, which has certainly enriched interpretation while rendering these terms so complex. The Aristotelian heritage and that of Western art history have made it such that these two words are confused under the single term of mimesis. Thus the figure dissolves into the concept of representation; it is that which gives itself to be thought of according to a mimetic process, a narrative that makes history visible.

The figure and figuration are at the heart of my work, and I work from real images. Yet I don’t see any imitation of the real, nor do I see narrative or a form of representation. If I insist on this distinction, it is to attempt other relationships to figuration, such as those explained by Jean-François Lyotard or Georges Didi-Huberman who return to the figura and the attempt to “represent” the unrepresentable by oscillating between lack and surplus, between too few and too many figures. Of course this is without attaching oneself to another closed idea: that of figuration in opposition to representation, especially because the latter is perceived differently in Arab-Muslim cultural heritage in which the very idea of representation is strange. There are two texts on the development of these ideas of figuration, witnessing, and representation that for me are key: Didi-Huberman’s L'image ouverte: Motifs de l'incarnation dans les arts visuels and the work of the young philosopher Arafat Sadallah, notably “Le témoinage du trait” [1].

EC: What difficulties did you encounter when making the model in The Anti-Clock Project, and how were you able to resolve these challenges?

NC: The biggest problem was finding a digital map of Tunis detailed enough to visualize the most minute details. Google Map and Google Earth images of so-called “Third World” countries like Tunisia are of poor quality and there is no “Street View” that allows surveying the streets virtually. Nor are there any accessible high-resolution maps, even out-of-date ones. In Tunis, I contacted the Minister of Facilities and Planning as well as the city’s Wilaya (governorate) and the only digitized maps they had —maps that state architects and planners use— were at least ten years old. Nor was it possible to obtain aerial photographs from the Center for Cartography, part of the Ministry of Defense, which would have required permission from the Ministry of the Interior, questioning, and months of waiting. These efforts only got me one part of the material but it was really insufficient. So I had to do it myself: scan the space for the model by photographing each architectural element and with the help of friends and friends of friends, it was possible to have a useable plan and begin the 3D modeling.

EC: I imagine that sometimes interpretations of your work see its engagement only in terms of the very recent history of the highly mediatized and so-called Arab Spring. Could you explain how you integrate this recent history into a longer one that is generally less well known and perhaps harder to grasp?

NC: It’s true that it’s a constant ever since politics have been at stake in artwork. The fact of the “Arab Spring” is exemplary but I think that such simplistic readings are more global. There is a general dumbing down of the spirit with the reduction of politics to simple events or anecdotes, to ribbing and bundles of information. At the same time, contemporary art plays its part in this simplifying tendency by reducing the artwork to the rapid and direct absorption of an often sarcastic idea. In my work, the question of the complexity of images is central. It is always about opening a priori “direct” forms to the irreducible depths by connecting them to one another and to other forms, contexts, and space-times. I believe that it is the natural progression of the spirit, a free spirit that searches, observes, analyzes, projects, and creates links between contemporary realities and the archive, between the personal and the sprawling nature of human history. And its in this sense that The Anti-Clock Project could be understood: not as something to be instantly consumed but through which each viewer can project his or her gaze, culture, and sensibility. The effort to seize it, which, for me, defines a certain intelligence of looking. More precisely, Tunis, like any other city, is a concentration of histories and signs, with each urban element referring to the historical complexity of human life, to the domination and control of the city as well as to attempts at liberation and emancipation. As a result, in The Anti-Clock Project, there is this unfurling of architectural and political elements: national banks, the central bank, the Place de l’Afrique [Africa Plaza], the Jardin des droits de l’homme [Garden of Human Rights] cohabitating with the seat of the former regime, run-down hotels that bear witness to failing economic politics, the Cité de la Culture [Culture City] with its conservative architecture, the statue of Ibn Khaldun, the precursor of modern sociology and history, here hemmed in by the other side of the downtown, facing the Clock of November 7… together, these elements make a street that is witness to a society.

EC: Like history, the archive is fundamental to your work. How do you use archives and found images to “compose in fragments,” as you describe it, and how do you see your role as an artist compared to that of a historian or architect? Might art be able to propose other methods for understanding the past and its recounting?

NC: I don’t have a specific method in my work because each time I take a different path. But often I begin with an image or a specific element —call it a fragment— because amputated from its source, it is more open to other associations. It’s in the practice itself that everything takes place, in the sense that I don’t have a preliminary sketch nor a selection of already prepared images. Elements are added little by little over time, according to ideas I have or a detail or motif that inspires me. It often happens that I stop drawing in order to find references, texts, or photographs, and since these details refer to this world of references, it creates many worlds.

I think that the artist’s role is above all to create forms of uncertainty, gestures that break with a certain methodological assurance and that are open to wandering. In a way, a primordial place is given to the power of the imagination and to the richness of associations and combinations. At the border of naturalism, art and nature find themselves meeting within almost hallucinatory associations. Undetermined like a sketch, they allow the imagination to roam freely, mixing with the irreality of the sketch and affirming the imagination’s priority in every observation and capture of the world.

EC: What are your current and future projects?

NC: Right now I’m continuing a series of drawings that I began a few months ago. I’m returning to some landscapes that are strange, to say the least, and advancing my graphic research towards an immediate and disinterested relationship to the things of the world. At the same time, I’m conducting research on the mediatized image and on the relationships of its own internal components, of what might found a liberated point of view.

(Translated from the French and edited for space.) 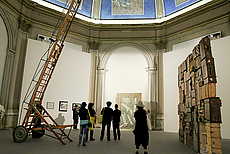