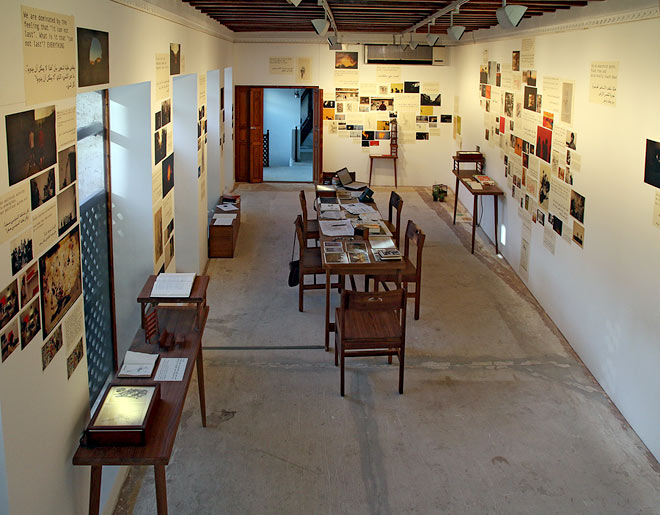 Mixed-media installation, 2012 - 2015
Partial commission by Sharjah Art Foundation
Exhibited at:
Sharjah Biennial 12
5 March - 5 June 2015
Sharjah, UAE
Venue: Bait Al Serkal
A three-part installation that spatialises a contemporary search for a new political language and imaginary. The project positions the ‘incidental insurgent’ as both a foil for present deficiencies and a protagonist in the pursuit of new formations of self-determination.

In SB12, The Part about the Bandits (Part 1) (2012) and Unforgiving Years (Part 2) (2014) are presented across a screening room and in an artist’s studio turned meeting area. In the latter, a variety of original and appropriated materials entwines an unlikely group of protagonists: the Marxist revolutionary Victor Serge, Abu Jildeh and Arameet, the bandit in Roberto Bolaño’s The Savage Detectives (1998), the publishing house Manshourat Salah El Din’ and the artists themselves. The installation’s suspended state reflects the challenges of leveraging prior political gains in the face of current configurations of power and capital.

When the fall of the dictionary leaves all words lying in the streets (Part 3) (2015), commissioned for SB12, comprises a four-channel video installation driven by an experimental audio track. Perhaps giving palpable form to the potential of the incidental insurgent in its myriad manifestations, Part 3 draws from reality, imagination and memory to move toward a direction that cannot be seen but feels possible.

(Text: From the SB12 Guidebook)

Statement by the artists about their three-part installation The Incidental Insurgents, unfolding a search for a new political language and imaginary. With photos and video extracts.