A critical look at indebtedness and impoverishment in the West Bank. Artist's statement, and photos of his show at Darat al Funun, Amman, 27 May - 16 Oct. 2014. 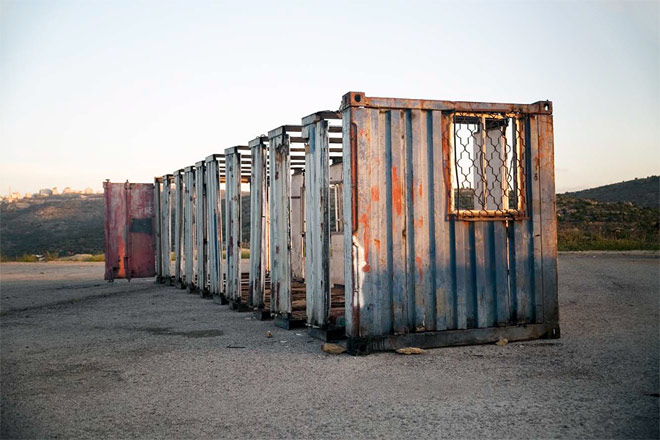 In the Book of Jonah a great whale swallows the prophet whole for defaulting on a promise made to God. While in the belly of this great fish Jonah pleaded for forgiveness and vowed to repay his divine debt. After three days and nights, God commanded the whale to spew Jonah out. But how shall we escape from the pathological debts that hold claim on our lives? Who shall give the command to spew us out?

Sheep, it is said, know the future. They can read the signs of the time. Every Palestinian child has sung the morbid rhyme Ya Ghanamati. One child yells the refrain while all the others bray in unison. The closing call, sem yahreekoum, has the leader promising to decimate the flock with poison. One sign of the times are billboards that advertise mortgages available to purchase condos in the innumerable real estate projects that monopolize the West Bank. The response is unchanged. No protest.

Camels, like sheep, were once revered as a store of wealth, a divine gift. A caravan of camels made even the most inhospitable of climates negotiable by offering shelter and security. In Palestine such caravans are a thing of the past. The nomadic Negev Bedouin are all but extinct, forced into prefabricated urban dwellings. Caravans today are little more than the name we give to shipping containers whose circulation ends permanently as settlements and offices in West Bank construction sites.

Caravans, the first solo show of Nida Sinnokrot in the region, features 12 new works relating to the rise of neoliberal politics, terraforming and social engineering that is sweeping the West Bank today. Drawing on past and continuing efforts to turn the Bedouins of Palestine into an urban proletariat indebted to Israel, Caravans takes a critical look at indebtedness as a form of impoverishment and the mechanisms of its promotion used by the Palestinian Authority in the West Bank.
Speaking to the divine origins of debt and marking a daring contribution to the history of the ready-made, Jonah’s Whale, a shipping container once used as an Israeli settler caravan and later repurposed as a Palestinian construction site office, stands in eleven cross sections, carefully hand-sliced through layers of steel, gypsum, insulation, wires, carpets and a mattress.

Ya Ghanamati - Billboard no. 2, a full-sized 6- meter long mechanical tri-louvered billboard partially surfaced with musty sheepskins pulled and squeezed between its rotating, reflective aluminum surfaces, is an emblem to the mechanisms of commercial debt. Hanging impossibly between tradition and modernity, Failing to Levant, a mirage of pulleys, steel cable, stone tile and a construction site chain-lift hanging from the gallery ceiling in an impossible equilibrium, suggests the Levant’s inability to flee its debts to tradition.

Precarity is nothing new to Palestinians; it's a foundational component of their modern experience. But bubble economics, consumer debt and real estate speculation are the contemporary ingredients of that experience in the West Bank. Perhaps Incense, the least assuming work in the exhibition ̶ a piece of frankincense carved into a nondescript dwelling positioned above a coffee cup ̶ says it all by inviting us to burn down the house. Refusal to pay is our only promise. 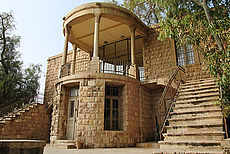