22 May - 22 Aug. 2014, Beirut Art Center, Lebanon. Attia's works raise questions on what binds and separates nature and culture in different spaces and times. 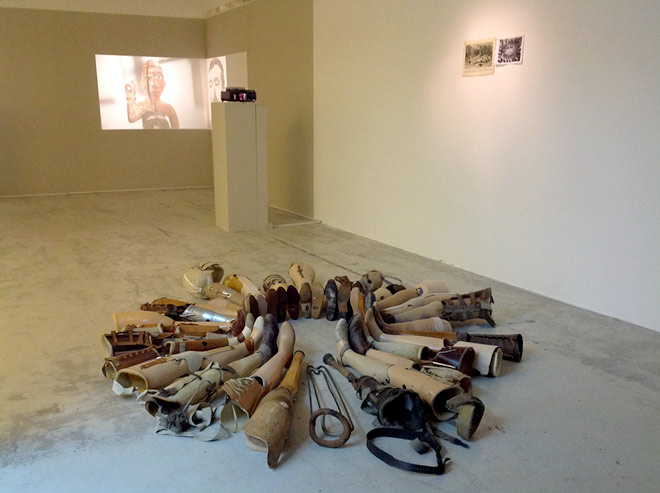 From 22 May - 22 August 2014 Beirut Art Center presents Contre Nature, a solo exhibition by the Berlin-based, Algerian artist Kader Attia. This exhibition is the result of an ongoing, extensive, interdisciplinary research around the polysemous notion of 'repair.' Through unexpected modes of re-appropriation and repair, Attia's works raise fundamental questions on what binds and separates nature and culture in different spaces and at different times. Contre Nature consists of works produced in several forms and media, including installations, sculptures, collages, videos, slides projection, photographs, newspaper clippings, and objects.

The exhibition opens with Mimesis as Resistance (2013), a video installation that introduces the practice of 'mimicry as camouflage,' one of the many forms of repair. Attia showcases the lyrebird's unique ability to mimic any sound that exists in nature or culture. Imitating the noise of chainsaws emanating from deforestation activities and the cracking sound of falling trees, this bird embodies nature's agency for survival, a process that Darwin and Wallace called "natural selection."

The notion of repair is equally pertinent to monumental, "cultural" projects. The artist is reproducing Kasbah (2009), a large-scale, site-specific installation that unfolds in the central hall of the center. In a process that is similar to the reconstitution of a «kasbah» almost 60 years ago by Algerian labourers for their home in colonial construction sites, Kader Attia has built his installation with material 'left-overs' from Beirut and its surrounds. They are collected, assembled, and laid on the floor in reference to ephemeral, social architecture such as a shantytown. This re-appropriation of urban waste is another form of repair that allowed for the construction of free, minimalist, and highly functional residential units, the measurements of which inspired a generation of architects like Le Corbusier and Roland Simounet.

At the last Congrès international d'architecture moderne (1959), a group of architects, inspired by Simounet's ideas, challenged the dogma of architectural modernism — embodied by Le Corbusier, Mies van der Rohe, and Walter Gropius—which aimed to export Western building methods to the rest of the world. A year later, some of these architects formed Team X, and started a movement that adapted architecture to the environmental and social specificities of its context, thus re-instating the practice of building culture from nature.

Attia also draws attention to the divergent approaches to reparation in modern, Western civilization and traditional, non-Western communities. In modern societies, repairing an object consists of bringing it back to its original state, or to make it look new. However, a series of found objects from different locations attests to a desire to make the act of repair as visible as possible. The repair of the bodywork of a scooter using fiberglass and pieces of cardboard packages, or of an 'oud using the helmet of a French soldier from the colonial army becomes an "artistic" signature of the repairer, as well as a political gesture of re-appropriation. Even though they are dissimilar, these practices must be understood as manifestations of man's trans-historical desire to dominate nature.

A part of the show will also be dedicated to the body, a site of repair where political stakes are very high. Attia's works engage with plastic surgery and prosthetics, African masks, the injured faces of soldiers who fought in the Great War, and transgender liminality. The visitor's itinerary of Contre Nature ends with a repair intervention on the walls of Beirut Art Center.

In the context of the exhibition, Kader Attia will give a conference entitled From Material to Abstract: the Red Queen Hypothesis convering music and the notion of repair on Friday May 23 at 7 pm.

in partnership with:
Institut Français 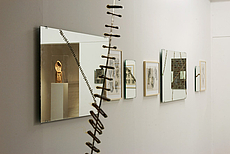 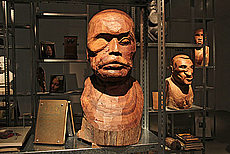 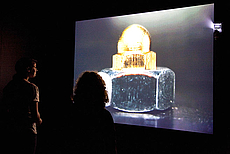 History of a Myth: The Small Dome of the Rock. Poetry and reflection in a contemplative space.