The third issue of the Digest series, published by the collective of curators and editors Peeping Tom, is dedicated to the art scene in Lebanon. 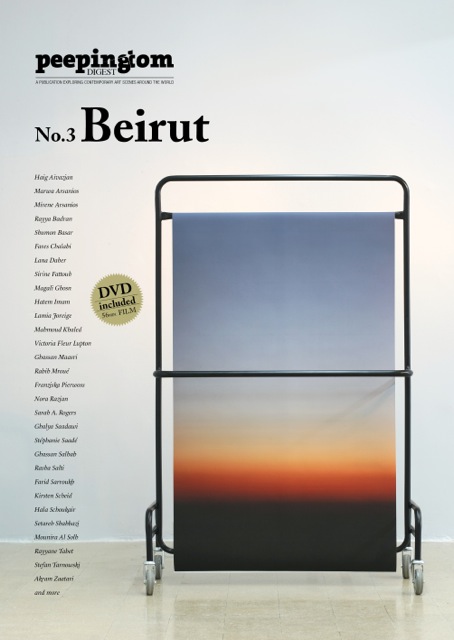 Founded in 2006 by Caroline Niémant & Stéphane Blanc, Peeping Tom is a collective of curators and publishers, and a non-profit organization.

Peeping Tom's Digest is an experimental and subjective publication exploring contemporary art scenes around the world. Each issue focuses on trends and movements of a particular geographic area and highlights the artists and initiatives represented within it.

After Berlin (2009) and Mexico (2011) the third issue focuses on the art scene in Lebanon, including a dvd film co-produced by the art film production house, Anna Sanders Films.

The starting point for both the film/roundtable and the editorial content of the book is a list of 46 quotations. These series of statements were asserted to the Peeping Tom collective by art practitioners during their first individual meetings and interviews which took place in Beirut in the fall of 2011. The sentences are deliberately taken out of context and will remain anonymous to respect the confidentiality but also to broaden the spectrum of interpretations and reactions. They include statements such as:

"The power of Lebanese art doesn't necessarily lie in the production itself. Rather its power can be located in the ambitions, efforts and vitality of the different actors within its scene." (#10)
"The war as a subject of continual scrutiny seems to be a comfort zone for many young artists here." //// "It appears, at times to be a response to an expectation from the market abroad." (#11)

"The sudden and relatively recent presence and interest of curators, journalists and editors in/ for the Middle East is annoying and suspect." (#38)

For the film shooting, the Peeping Tom collective invited 8 actors of the Lebanese art scene to convene together for a filmed round-table discussion at Ashkal Alwan. The event took place on february 8th 2012, and was moderated by Mirene Arsanios from 98weeks. The starting point for this conversation is the list of quotations. Out of 46 original quotations, 18 were debated during this roundtable and 9 made it into the final cut. The DVD presents a 56 mn possible montage of the 3h13 mn conversation. The 56 mn film is conceived of as an autonomous document in its own right, which allows for it to be potentially screened at various locations and on various platforms at galleries, art centers, museums, festivals and specialized web sites.

For the purpose of the book, Peeping Tom wanted to transfer the film protocol into a different form and and have it confronted with additional perspectives. In that regard, they asked 22 persons from diverse horizons- local and international writers, curators, art historians, researchers, filmmakers, editors, anthropologists, philosophers - to respond to the complete list of 46 quotations. Only this time, the responses were generated individually and in written form. Contributors were free to respond to one affirmation, several of them, each one of them, or to consider them as a whole. The responses generated could take shape as an answered questionnaire, in essay format... or in any other manner they wish to develop further.

Not forgetting what this is all about, Peeping Tom selected some artworks, projects and images that caught their attention during their Beirut trip and related researches. Emblematic of an artist's practice or absolutely anecdotic and/or personal, they form a rapid and non-exhaustive way to iconographically plunge into the "local production" and beyond, potentially, to give some ground material for further research, and eventually to highlight the inconsistency of many of the quotations.

Authors and participants include: