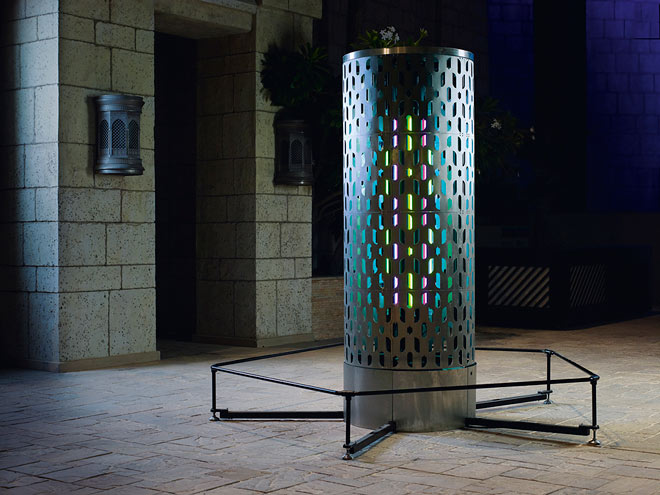 Sharmini Pereira: The New Dream Machine Project is inspired by the British-Canadian painter Brion Gysin's 1960's kinetic light sculpture Dream Machine. The unique 12 foot sculpture is fabricated by engineers in Slough and has been the centerpiece of a music event involving The Master Musicians of Jajouka and rock guitarist Duke Garwood at the Cinémathèque de Tanger in 2011. It has led to a set of multiples created by craftsmen in Morocco, using recycled local tinned foods and turntables picked up in a souk in Fez. New Dream Machine Project is a work with many influences and trajectories. How would you define what it is?

Shezad Dawood: I was very interested from the outset to make this project an open-ended one, hence calling it 'New Dream Machine Project', rather than New Dream Machine. Given that what I wanted to trace was a set of multiple histories and narratives, which embraced various locations as well as Sufism and proto-cinema, it was important from the outset that the project was framed as a series of possible iterations, rather than a finite object or series of 'things'. For me what was always more important about this history around Gysin, Tangiers, Mohamed Hamri and The Master Musicians was its series of liminal encounters that extended beyond and between the borders of a more tidy or linear art historical narrative. Concurrently, I wanted my own research and work in Morocco, and elsewhere, to be present, alongside my own liminal encounters in order to conflate the time periods the project was referencing. So I wouldn't say it is one thing or another, but a series of events and encounters, that might be experienced as a film (Harris Museum & Art Gallery, Preston,17th September-26th November 2011), a performance (Cinémathèque de Tanger, Tangier, 12th February 2011), a sculpture (Abraaj Capital Art Prize, Dubai, 16th-19th March 2011) or a workshop (Production : Postproduction, L’appartement 22, Rabat, 12-15th December 2011), or an interview for that matter.

Sharmini Pereira: When Gysin went to Tangiers it was Mohamed Hamri, the Moroccan painter that introduced him to The Master Musicians. It was Gysin who in turn introduced The Master Musicians to Rolling Stones member Brian Jones, who went on to introduce The Musicians to international critical acclaim. What events, liminal encounters, introductions or conversations led you to develop the New Dream Machine Project?

Shezad Dawood: I've always been quite interested in the mystical experience. My father was a rock music photographer in the US in the 60s, and I saw some of his photographs of psychedelic 'happenings': the interplay of light and sound have definitely been absorbed into the work through my encounter with these images when I was younger. On a more professional level, it was while researching in Morocco some years ago that I first met Abdellah Karroum. I'd heard about his work, and was interested to meet him, and walked into a bar and there he was. And that conversation is still going on today. We are currently working together on a new film project that is being developed with the Delfina Foundation and Film & Video Umbrella in the UK.

For some years, Abdellah and I had been discussing the New Dream Machine Project and the interesting fault-line between the Beat Generation escaping a repressive US regime to come to another equally repressive regime in Morocco. And it was my desire to connect to Morocco in no uncertain terms that led to staging the concert to the public and to workshops after the event. I equally brought in guitarist Duke Garwood, who has become a good friend through composing the soundtrack to my 2008 film 'Feature', which I'd still like to see released as a soundtrack album one day. Then there was Yto Barrada, who I met through my friend Viviana Gonzales (who has lived in Morocco for some years now), which led to a conversation where Yto kindly suggested I stage the performance at the Cinémathèque, which was a logical destination in terms of bringing the project back to Tangiers and within a cinematic framework: a completing of a circle if you will!

Sharmini Pereira: The metaphor of the circle is suggestively present throughout the Project. From the series of chance encounters and conversations you've just described to the rotating motion of the Dream Machine sculpture or the use of turn-tables and recycled food containers in the fabrication of the miniature Dream Machines, whose title, Recyclage might equally refer to the recycling of ideas across socio-cultural histories. Is the idea of circularity or of things moving in an orbital relationship with one another important to you?

Shezad Dawood: Looking at the rotating motion of the Machine and a notion of recyclage, there is of course the relation between the Dream Machine and the Zoetrope. This is what I mean by seeing the Machine as proto-cinematic device. Hence the added interest to stage the performance at the Cinémathèque and my own interest in proto-cinema that I mentioned earlier, which in turn became one of the main subjects of discussion at a workshop that was held at the L’appartement 22 last December, and is definitely a subject that Abdellah and I like to riff on.

I've long been interested in the parallels between the Hindu concept of Shunya (which sees time as a non-linear series of parallel circles), the rhizomatic structures of Deleuze, and a 13th century cosmological diagram by Ibn Arabi, which shows a large circle, itself encircled by 4 smaller circles. In fact this diagram could be seen as an aerial view of the Dream Machine. It is this series of moments out of time that interest me. I’m drawn to the way that one seemingly autonomous event prefigures another, and points the way to the possibility of synchronised consciousness, or a set of coincidences.

Sharmini Pereira: When the Sufi mystic Ibn Arabi was leading a prayer meeting in Fez in 593 he experienced a vision where he says: "I lost the sense of behind. I no longer had a back or the nape of a neck. While the vision lasted, I had no sense of direction, as if I had become completely spherical."   He could almost be describing himself as a Dream Machine. Would this be the sort of coincidence that interests you?

Shezad Dawood: I guess this is the sort of coincidence that interests me, but more accurately I have also learnt how and where to anticipate such coincidences. I think it is possible to inhabit a mindset wherein you naturally accumulate references that you are seeking, or perhaps are able to condition your brain waves into oscillating at the same frequency as kindred moments, across time and space. Maybe it's the structural fact of coincidence that interests me most. The fact that I have chosen the Dream Machine as a subject, is ultimately relatively arbitrary. It is more about the narratives generated and the consideration of chance in relation to time, historical narratives and cinema that interests me the most. Maybe the Dream Machine is just a useful bridge from the shadow-play of cave-dwellers to the son et lumière of Hollywood.

Curator, publisher and director of Raking Leaves. Based in London, UK.