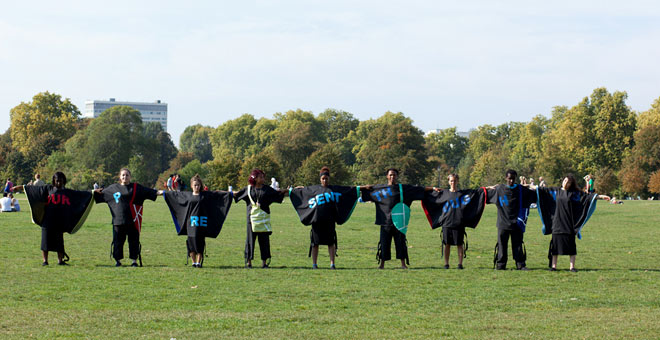 On Friday the 30th of September and Saturday the 1st of October 2011, Londoners were surprised by two remarkable phenomena – the hottest autumn days ever recorded in Britain, and the sight of patchwork tents reminiscent of those in Tahrir Square sitting on the green expanse of Hyde Park. This was Egyptian-German artist Susan Hefuna’s contribution to The Edgware Road Project – an initiative developed by The Serpentine Gallery that links local and international artists with people who live and work around this bustling London neighbourhood.

In May 2011 in the wake of the Egyptian Revolution, Hefuna ran a workshop at The Townhouse Gallery in Cairo with 40 members of the public, including spectators and participants in the recent uprisings. The object was to decorate traditional Egyptian tents – like the ones some demonstrators had used in Tahrir Square during the Revolution – with their personal stories, slogans, messages about their reaction to recent events, and their hopes for Egypt’s future through embroidery, patchwork, painting and illustration on the exterior and internal panels. For example the Kentucky Tahrir tent was inspired by its maker’s horror that the government said people were only going to Tahrir Square to demonstrate because the local Kentucky Fried Chicken was giving them free meals.

Inside each tent were small screens showing video interviews with the teams that made the tent, passers-by, and demonstrators of all ages and class; interviews that expressed the intimate feelings of Cairo’s young and old, rich and poor, street urchins and intellectuals. After being exhibited in Cairo, the tents were open to the public at a two-day event at Speaker’s Corner in Hyde Park – a significant and symbolic location, as this section of Hyde Park has been the site for public meetings, debate, and the exchange of ideas for centuries.

Activities over the two days were open to everyone, and visitors from the area, tourists, and people randomly crossing the park mixed with schoolchildren, students, musicians, and public figures to rest on giant cushions embroidered with inspirational proverbs and quotes; see the video interviews inside the tents; listen to the sound installation; watch dance performances by young students wearing costumes designed by Hefuna; and write a wish on a ribbon that they tied to qafas structures (cages, baskets and boxes made of palm fronds) sent from Cairo to Alexandria and then by ship to London to be decorated with handwritten wishes on fabric ribbons. Smaller qafas served as seats and tables for visitors. As the sound of Egyptian popular music including Om Kalsoum and Amr Diab filled the air, many passer-bys even joined in some spontaneous dancing.

At the same time an educational camp was held for children, and there was a free raffle with all prizes handmade in Egypt, including miniature toy tents, traditional Aroussa dolls (or "little brides"), Egyptian flags, and T-shirts with Arabic and English "I Love Egypt" slogans. The atmosphere was wonderfully festive, the park a perfect backdrop for the traditional colours used by the Khayamiyyin (tentmakers and patchwork artists) during Egypt’s Mawlid – the annual festival that celebrates the birthdays of historical religious figures such as Sufi saints and holy men (which makes it less religious and more pagan, with music, dance, food and drink).

Hefuna dedicated the event to the Egyptian people and successfully connected the general public in London with those in Tahrir (Liberation) Square in Cairo, as well as proving how enjoyable and moving such interaction between art and the general public can be. It was also a triumph for the Serpentine Gallery, which initiated The Edgware Road Project. The Serpentine is co-directed by two wonderfully open-minded curators, Hans Ulrich Obrist and Julia Peyton-Jones, who embrace experimentation and the exchange of ideas with artists from all over the world. The Edgware Road Project is a branch of its research programme based in the Centre for Possible Studies, which hosts screenings, events, and an ongoing project archive.

Hefuna has worked with the Centre for almost three years on this project in different stages: the first was the Little Cairo Postcards series of her black and white photos of London, which were distributed all over and mailed between both cities: Cairo and London for two years. The next step was a display of four videos she took of life on Edgware Road itself. She made the videos from hidden cameras set in the windows of apartments along the Edgware Road, shooting 100 minutes unedited crossroads at the Al Arez restaurant, in front of Waitrose supermarket, at Edgware Road Tube Station and at Church Street market. A similar technique was used some years ago for her videos Life in the Delta and Cairo Crossroads. The Edgware Road videos were screened on monitors around the Townhouse Gallery in Cairo. Four video monitors were installed in Cairo on the street, in cafés, or shop windows and displayed day and night from beginning of December 2010- mid January 2011.

Was the event worth so much work over so many years, involving so many people for such a short period of time? Hefuna did not hesitate to say yes. What is interesting, she said, was the journey, the research, the encounters, the opportunity for collaborations, the joys and failures of a project – these are what make an artist grow. When I asked her about her "Plan B" in case it rained, which is usually the case in London, she said she never imagined a Plan B. What fantastic confidence, and how wonderful that not only Egypt but even the weather was on her side.

Curator, art critic, author; specialized on visual arts and film from the Near East and North Africa. Lives in London, Great Britain.